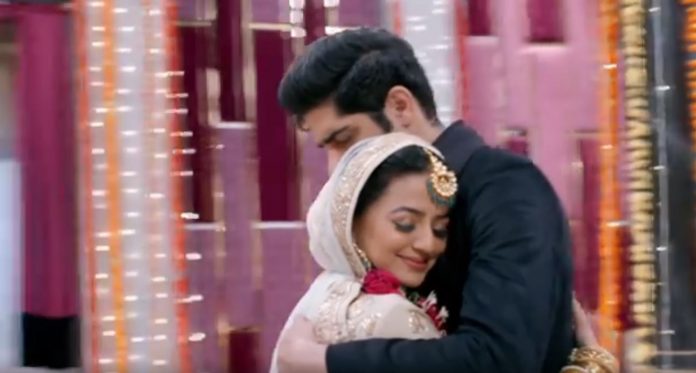 Ishq Mein Marjawan 30th November 2020 Written Update Vansh Riddhima unite Riddhima realizes that Vihaan didn’t come to stop the marriage. She feels hallucinating. She is helpless to exchange the garlands with Kabir. He tells her that the marriage is destined to happen, she will soon be his wife. She wants to die before getting his name linked to hers. He forces her to get seated in the mandap. Riddhima cries when Kabir requests Dadi to perform the Kanyadaan ritual. Dadi is hurt to give Riddhima’s hand to Kabir.

Kabir tells Riddhima that she belongs to him. Riddhima deeply misses Vansh. She wants to end her life. Kabir finds the nuptial chain missing. Anupriya doesn’t know about it. Kabir threatens Riddhima if she is behind the disappearance of the nuptial chain. Pandit tells that the nuptial chain is important to take the rituals ahead. Kabir scares her about the fire in his eyes, which will burn the entire house.

She decides to be of Vansh and die as Vansh’s wife. She doesn’t want to part her name from Vansh’s name. Riddhima wants to end her life to get close to Vansh in the heaven. She spreads a smoke in the house to consume the poison by misleading the family. Kabir wants Aryan to fix the smoke fog. He wants to complete the final seventh round with Riddhima.

He tells Riddhima that he is a devil and he will win this time, he will not spare her. Riddhima tells Kabir that she will be dying instead marrying him. She wants to leave the word. She gets a poison bottle to end her life. Vihaan makes an entry home to stop the marriage and outdo Kabir in his plans. He tells the family that the marriage can’t happen when he is alive. The family gets overjoyed to see Vansh back, and so is Riddhima.

Riddhima is glad that he kept his word and made an entry in the final moment. Kabir and Anupriya are in deep shock that their enemy is back. Riddhima happily runs to hug Vihaan. She scolds him for coming so late and putting her into trouble. Vihaan asks Kabir to welcome him back. Dadi blesses her Vansh and has much belief. Vihaan tells Dadi that her devotion had to bear fruit. Anupriya feels its a nightmare that turns true.

She doesn’t know how Vansh cheated death and came back. She asks Kabir what will they do at this time. Kabir tells that he had seen Vansh dying, its surely some doppelganger. He doesn’t think Vansh’s return is possible. Vihaan tells Ishani that she had to bear a lot because of his leaving. Ishani turns emotional. She unites with her brother. He makes an emotional appeal and convinces her. She tells him that Siya is still in coma. Vihaan tells that he will correct all the wrongs in the house. Angre expresses his happiness on seeing Vansh back.

Kabir and Anupriya can’t deal with Vansh’s return. Chanchal tells them that Vansh’s look is incomplete without the beard. Vihaan tells them that hospital staff changed his look during the hospital treatment. Anupriya fakes her concern for Vansh. She tells him that she was scared on knowing that his dead body was missing. Vihaan tells that it was his good luck that he got saved. He tells the same story taught by Riddhima.

He asks the family if they aren’t surprised to see him. He asks Kabir about the surprise shock he was planning for him. He tells that he didn’t imagine Kabir would be a part of the family. Kabir questions him about the physical wounds. He suspects Vihaan. Riddhima fears that Kabir will not believe Vihaan’s truth easily. Vihaan tells him that few wounds are still to heal. He convinces Kabir of his identity. His indirect taunts make Anupriya scared. Vihaan asks them about his biggest enemy Kabir, what is he doing in the family. Anupriya’s long lost son story gets known to him. Ishani tells that Kabir is Anupriya’s son.

Vihaan asks Kabir why didn’t he find Anupriya before. Chanchal supports Anupriya so that she stays saved. Anupriya tells Vansh that Kabir’s return is a miracle, just the way how Vansh has returned. Vihaan tells that the family had easily accepted Kabir well. Chanchal tells that Riddhima permitted Kabir to stay in the house and also agreed to marry him. Vihaan interrogates them further as Vansh would do. Riddhima feels so proud of Vihaan’s acting skills and smartness that he is handling everything so well to convince the family. Will Riddhima know that Vihaan is her Vansh? Keep reading.

Reviewed Rating for this particular episode Ishq Mein Marjawan 30th November 2020 Written Update Vansh Riddhima unite: 3/5 This rating is solely based on the opinion of the writer. You may post your own take on the show in the comment section below.