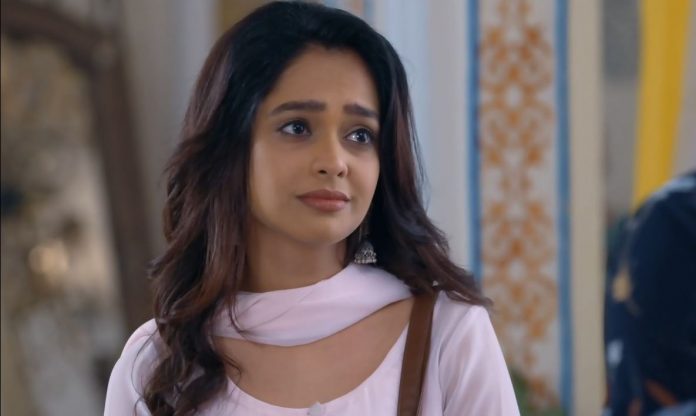 Kumkum Bhagya 30th November 2020 Written Update Prachi curses Rhea Rhea blames Pragya and hurts her heart. Aaliya is happy that Rhea is hating Pragya. Rhea doesn’t want to listen to Pragya and Prachi’s clarification. She tells that she didn’t know that Prachi is her sister. She asks Pragya not to emotionally hurt her. She feels she was right that her mum will never come in her life. She didn’t know that her world will complete or not. She tells Pragya that she had easily forgiven her. She feels cheated that Pragya took revenge on her.

She wants to know from Pragya why did she not tell her the truth that she hates her. She calls Pragya the world’s worst mother. Prachi asks Rhea not to accuse Pragya without thinking anything. She tells that Pragya loves Rhea a lot. She defends her mother. Rhea tells that they are saying the same lines since they have prepared it before. Prachi asks her to feel the truth. Rhea tells that no mother can do wrong with a child. Pragya tries to calm down Rhea.

She apologizes to Rhea. Rhea asks Pragya to measure her pain and needs for a mother. She tells that Pragya can never imagine that she had turned her bitter by punishing her for 20 long years. Rhea hates Pragya and Prachi. She asks them to not have any terms with her. She is okay to live her life without them. Prachi asks Pragya not to look back at Rhea, maybe they have come at a wrong place. Rhea ousts them from the house.

Meanwhile, Ranbir wants to know about Prachi. He calls Sarita to know about Prachi. Sarita tells that Prachi isn’t at home. He tells that he is coming home to meet Prachi. Sarita doesn’t know the reason for his coming. Pragya tells Prachi that she wants to explain Rhea. Aaliya and Mitali are glad that Rhea had ousted Pragya. Meera knows Rhea’s disturbed state of mind. She knows that Rhea had been waiting for her mother since a long time. Pragya sheds tears of sorrow. She didn’t imagine that Rhea will have hatred in her heart again.

Meera wants to guide Rhea. Aaliya brainwashes Rhea once again. Rhea tells that she will end the matter between Prachi and her. Prachi can’t see Rhea and Pragya crying due to a misunderstanding. She tries to clear the matter. She tells the truth to Rhea. She scolds Rhea as her elder sister. Aaliya warns Prachi from lecturing Rhea. Prachi tells that she is also feeling bad to see the entire family insulting Pragya. She feels lucky that Pragya was with her. She accuses Rhea for insulting Pragya to the limit that Pragya is regretting for her life.

Aaliya is happy to see the sisters fighting and hurting each other’s heart. Prachi tells that she is happy that Rhea doesn’t deserve Pragya’s love. Rhea is emotionally shattered. Rhea vents anger that Pragya had filed the FIR against her. Prachi tells that Pragya didn’t file any complaint, but Rhea really deserves to be in jail. She values relations more than money. Prachi tries to fill sense in Rhea’s mind.

She tells that Pragya was coming to unite with Rhea, but the latter had pushed her away. She blames Rhea for spoiling the future with Pragya. She asks Rhea to see that they can be happy with Pragya and Abhi. She feels Rhea has hatred in her heart, who will never get anyone’s love. She curses Rhea to never get a mother’s love. Rhea asks her to get lost and never show her face. Aaliya asks Rhea to stick to her words and not run to see Pragya again. Prachi asks Pragya to come with her. Pragya doesn’t want to go anywhere. She tells that she will explain Rhea. She doesn’t want to leave. Abhi gets disturbed in the sleep.

He feels the nightmare isn’t ending. He wants the family to unite. Pragya tells Prachi that Rhea is angry, she doesn’t hate her. Prachi asks Pragya to forget Rhea and accept the fact that everything is over. Abhi gets scared by the bad omen. He waits for Pragya’s call. He doesn’t see Pragya in his house. Ranbir decides to leave his house for Prachi’s sake. Pallavi ends relations with her son. She tells him that she will forget him. Ranbir tells that he will not leave Prachi at any cost, even at the cost of his life. They both stay adamant on their decisions.

Reviewed Rating for this particular episode Kumkum Bhagya 30th November 2020: 3/5 This rating is solely based on the opinion of the writer. You may post your own take on the show in the comment section below.