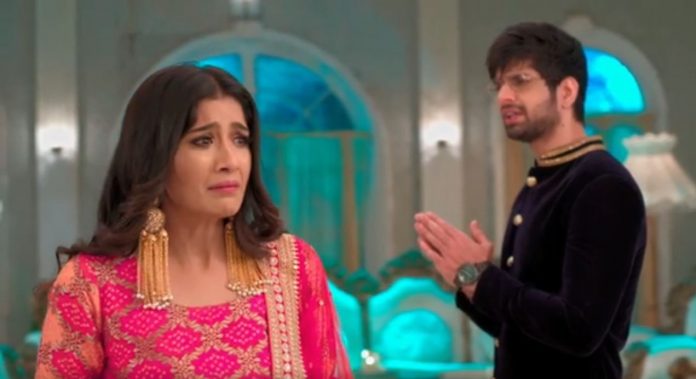 Choti Sardarni 2nd December 2020 Written Update Meher Manav affair revealed Meher doesn’t want Kulwant to have ego. Kulwant stops Meher from opposing her. She asks Meher why didn’t she fight Vikram to save her secret from coming out. She jokes on Meher that she is a weak person when its about Manav. She tells Meher that she should better focus on Karan’s matter. She taunts Meher and puts her in a deep thought. Pathak tells Manav that he has come to receive the report so that the secret stays a secret.

Manav asks him to keep the report confidential and just give it to Harleen. He doesn’t want Sarabjeet and Meher’s reputation to suffer. He tells that he will always want them to be happy. Pathak lies to him that he will protect Sarabjeet’s reputation. Aditi asks Manav to see Sarabjeet getting Karan in his meeting. Sarabjeet speaks to the doctors panel to improve strategies to deal with Corona virus. Manav is glad to see Sarabjeet taking good care of Karan.

He watches Sarabjeet pampering Karan. Sarabjeet tells that he loves his children and his state equally. Aditi respects Sarabjeet who is an ideal father. She asks Manav to learn parenting too since they will soon have a child. Manav thinks he still has to learn a lot from Sarabjeet. Meher doesn’t deter from her decision. She tells Kulwant that she will not leave until Amrita’s coaching classes begin.

Meher finally fixes the coaching classes board. Kulwant doesn’t want Meher or Amrita to come between her business goals. Kulwant creates a havoc in anger. Meher knows how to hinder her mother’s madness. Amrita gets blamed by Rane. He tells her that Amrita can’t do anything without Kulwant’s permission. Meher doesn’t lose heart. Amrita asks Meher to stop taking a stand for her and break the family peace. Meher fights Kulwant for Amrita’s rights. Pathak leaks the sensitive news that Karan isn’t Sarabjeet’s son, but Vikram Deewan’s son.

A huge shock strikes Sarabjeet and Meher. They can’t believe when they hear the news reporter revealing about Meher and Vikram’s illegitimate child Karan, their affair existed before Meher’s marriage happened with Sarabjeet. Meher is shell shocked thinking Manav has defamed her. She didn’t expect this from Manav. Sarabjeet freezes on hearing the accusations on Meher’s character. The world gets to know about Meher and Vikram’s affair.

The shocking news reaches Harleen, Aditi and Seema as well. How will Sarabjeet and Meher handle this new mess? Will Manav regret for trusting Sarabjeet’s enemy Kumar Pathak? How will Manav fix the damages done to Meher’s image? Keep reading.

Reviewed Rating for this particular episode Choti Sardarni 2nd December 2020 Written Update Shocking Meher Manav affair revealed: 3/5 This rating is solely based on the opinion of the writer. You may post your own take on the show in the comment section below.

Meher protests against Kulwant. She tells Amrita that Kulwant can never stop her. Amrita doesn’t want Kulwant and Meher to fight. Kulwant gets Param there to show Meher’s protest. She asks him to get stubborn and sit on the ground to get his wish fulfilled, like Meher is being stubborn now. Meher asks Param now to learn bad things from Kulwant. Param tells that she is also doing bad with Kulwant. He tells that he will learn the same thing with her. Meher gets helpless because of Param. She doesn’t want him to pick anything wrong. Meher leaves the protest. She asks Kulwant not to use Param in her plans.

He tells that she is going home just to save Param from wrong teaching. She tells that she will come back and start Amrita’s coaching classes. Kulwant tells her that she should focus on Karan so that Vikram doesn’t snatch Karan. Sarabjeet and Aditi are busy in the meeting. Harleen gets an envelope. She learns a shocking thing. She rushes to see Sarabjeet. She finds him in the middle of a meeting. Harleen doesn’t talk to him. Harleen calls Aditi. Aditi doesn’t want to talk to her.

Manav insists her to talk to Harleen. Harleen tells Aditi that he has received blood reports. She tells that she is coming to her home and wants to talk about it. Manav feels Harleen received the DNA reports. He knows why Harleen is coming home. He also wants Harleen to convince Aditi to accept Karan so that Sarabjeet doesn’t get defamed. He prepares to meet Harleen. Harleen leaves for Aditi’s house, while Meher brings Param home. Kulwant reprimands Amrita for going to Meher to seek help.

Amrita tells that she has to earn and support her family. Kulwant gets angered on her Bahus. She forgives Amrita. She warns Amrita to never go against her. She tells that Meher is broken because of her past. She doesn’t think Meher has any sense. Sarabjeet’s family matter gets known to the media. Sarabjeet and Meher are shocked to see the news playing. The reporter tells that Meher was pregnant before her marriage with Sarabjeet, she had an affair with CBI officer Vikram Deewan.

Kumar Pathak thinks Sarabjeet will not be able to counter this mess. He wants Sarabjeet to beg him and fall in his feet to save Meher’s respect. Meher tells Sarabjeet that Karan’s blood sample would be needed for DNA test. She checks Karan. She tells that Karan’s blood sample was taken by someone from their family. Sarabjeet loses his temper. Meher apologizes to Karan. She wants to call Manav and rebuke him. Sarabjeet stops her. He wants to know who cheated him from the family.

He checks the CCTV footage. He finds out that Robby is the culprit from the family. He had forgiven Robby many times. He doesn’t want to spare Robby now. Robby is surprised to see the bed flooded with cash. Sarabjeet and Meher meet him and confront him for the big deceive. Meher stops Sarabjeet from slapping Robby. Sarabjeet angrily throws out Robby from the house. He wants to inform Harleen that Robby has crossed all limits this time. Keep reading.

Mayura is back to take revenge on Omkar for his crimes to ruin her life and family. She stands against him by exposing the ugly sight of her wounded face, which is also a misdeed of Omkar. She know that he can’t stand the sight of her. She makes him pay the price. She tells him that now she will be torturing him with her stain. She cages him in the sight of the facial stain. Omkar asks her to get away and not show her face. Mayura removes the veil and tells that he has to see her all the time from now.