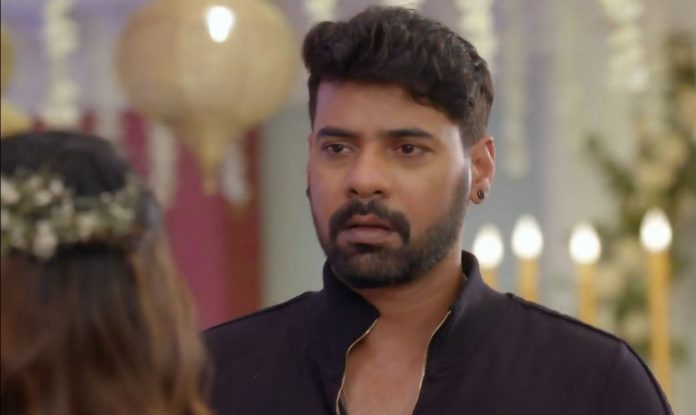 Kumkum Bhagya 3rd December 2020 Written Update Abhi proposes Meera Abhi tells Rhea that he can’t marry Meera or anyone else. He asks her not to say such a thing that hurts Meera. Rhea feels that he doesn’t think of anyone else. She tells him that she has always cried for a mother, he was his mom in her childhood. She tells that he had sacrificed a lot for her sake, but he didn’t get a mother for her. She knows that he has done everything for her sake. She was possessive for his love and didn’t want to share it.

Abhi reasons out that Pragya was just upset. Rhea tells that she is guilty that she did wrong before. Aaliya doesn’t think Rhea did wrong. Abhi stops Aaliya from brainwashing Rhea. Rhea tells Abhi that Prachi had insulted her a lot, she said no one will become her mother. Abhi justifies Prachi. Rhea tells that she has taken a stand for herself. She demands him to get a mother for him by marrying Meera.

She chooses Meera for his life. She tells that she will leave the house and go very far from him. He gives in to her demand. He agrees to talk to Meera about the marriage thinking that Meera will never agree. Abhi tells Rhea that he has a headache. He goes to speak to his doctor. He gets to see Pragya’s picture and cries for her. Rhea wants to prove that she also has a mother. Mitali prays that Rhea gets Meera as her mother. She tells that Meera may refuse. Rhea is sure that Meera will say yes to Abhi.

She doesn’t want to forgive Rhea. Shahana consoles her. She tells that Rhea would have stopped Abhi and Ranbir also. Abhi meets Meera to propose her for marriage. Meera is surprised to hear it. She didn’t expect this from him. She loves Abhi a lot since years. She tells that she has got to know about Pragya, she has seen Pragya with Rhea. Abhi tells that Pragya is back in his life. Meera tells that Prachi has rebuked Rhea badly. She doesn’t think that the family matter is so important that he came to discuss it. Rhea overhears their conversation.

Meera tells him that Pragya will take Rhea’s responsibility and now its her time to leave. She tells that she will miss Rhea a lot. He tells her that he didn’t come to ask her to leave, but to ask her for marriage. He asks her to refuse if she wants. He promises to respect her decision. He tells her that its Rhea’s demand that he marries Meera.

Reviewed Rating for this particular episode Kumkum Bhagya 3rd December 2020 Written Update Abhi proposes Meera: 3/5 This rating is solely based on the opinion of the writer. You may post your own take on the show in the comment section below.