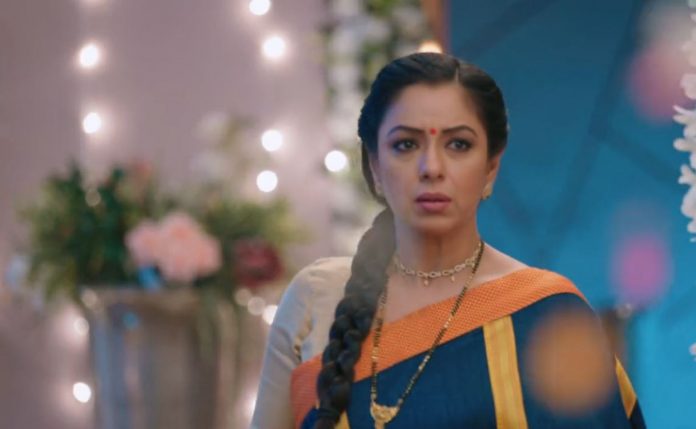 He tells that Anupama is also in sorrow, they didn’t force Vanraj to marry Anupama, he didn’t see anything bad in Anupama but he found her lacking after meeting Kavya. She asks him why did he not explain Vanraj and send him out of the house. He tells that he had to do justice with Anupama. She fails to convince him. She cries a lot for her son. Anupama overhears their conversation. She is agitated.

Anupama tells Hasmukh that its her mistake that she couldn’t save her marriage. Hasmukh doesn’t think she is at fault. He tells her that Vanraj has done wrong. Vanraj is adamant to his decision. He tells Kavya that he loves her a lot. She tells that she knows his choices well, but she will need time to change according to him. Paritosh is remorseful that Kinjal and his relationship broke. He asks Anupama to sell the ring. Anupama gives him strength. He tells that he is paying for his elders’ mistake, he won’t be marrying Kinjal.

She tells that he will marry Kinjal. She asks him to keep the ring for Kinjal. Kinjal comes home to meet them. Leela stops her at the door and shouts on her because of Rakhi’s drama. She tells that Rakhi wanted to break the alliance, she planned and broke their family also. She breaks the alliance from her side also. Kinjal apologizes to Leela. Leela tells that she is ahead of Rakhi when it comes to lecture anyone. Anupama stops Leela from ousting Kinjal. Anupama looks for Kinjal who actually leaves before itself.

Paritosh goes to meet Kinjal. Anupama feels sorry for Paritosh and Kinjal. Samar doesn’t want Paritosh’s love to stay unfulfilled. Anupama tells that Paritosh will get his love. Anupama wishes Vanraj realizes his mistake. Kavya is happy to have Vanraj with her. Vanraj wants Kavya’s support, but Kavya is busy in her work. Vanraj starts missing Anupama, who used to care for him a lot. He gets ready for office. He doesn’t find anything suitable to wear. He checks Kavya’s cupboard to look for his tie.

Samar tells Anupama that he will start working and earn money. She asks him to not worry for the family, she will arrange money for the family, he doesn’t need to sacrifice his dreams. She asks him to follow his career. Leela tells Anupama that she can’t live happy without her son. Anupama tells that she can understand her pain, but she is sorry that she can’t lessen her pain. Leela is sure that Vanraj will return home. Vanraj arrives home to meet Leela and Pakhi. He does a son’s duty and gives money for the household expenses. He gets Leela and Pakhi on his side.

Reviewed Rating for this particular episode Anupama 3rd December 2020 Written Update Vanraj wins support: 3/5 This rating is solely based on the opinion of the writer. You may post your own take on the show in the comment section below.