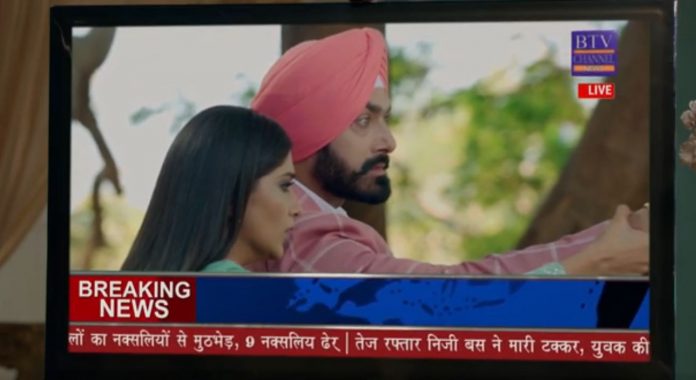 Choti Sardarni 3rd December 2020 Written Update Shocking declaration Sarabjeet cries for his son’s pain. He ends ties with Robby, who has taken an advantage of his decency. Meher is worried that they have to wait till Harleen comes. Sarabjeet doesn’t listen to her. He tells that Harleen doesn’t need a useless husband like Robby. He leaves Robby with a warning. Robby gets homeless. He begs Sarabjeet not to snatch the roof over his head. Sarabjeet wants him to get out of his sight. Meher too doesn’t want to believe a traitor like Robby. Sarabjeet wants to clear Meher’s name in the media. He doesn’t want Pathak or Robby to play any game against him, and further blackmail him.

Sarabjeet’s shocking statement gets seen and heard by Manav, Aditi and Harleen. Sarabjeet isn’t scared to admit that Meher was in love with someone before marriage. He doesn’t want anyone to judge his wife. He protects Meher’s dignity when some reporters speak ill of him. Aditi goes mad in anger and keeps a knife at Meher’s neck. She vents anger on Meher, shocking Sarabjeet. Manav also didn’t expect Aditi to take such a step. Will Aditi hurt Meher? Keep reading.

Harleen meets Aditi and gives her the blood reports, which aren’t so important. Manav wants to know about the DNA reports, if Harleen has seen it or not. Sarabjeet calls a press conference to make a shocking disclosure. Sarabjeet thanks the reporters for coming on a short notice. He tells that he wants to introduce his family to them. He tells that that Meher is his wife, Param and Karan are his sons. He tells that the people of the state are his extended family. He tells them that he wants the people to know his family well so that there is nothing hidden behind them.

The reporter wants to know why Sarabjeet has called the press conference. Manav thinks Harleen will talk to Aditi about Karan and then the discussion for his child Karan will begin. He hopes that he gets his son back. Sarabjeet tells the people that he is going to tell them a big truth by which the people will either love them or hate them. He doesn’t want anything to stay a secret between them. He tells the people that family is the most important thing in his life. The media asks him about the truth. They don’t want him to keep any secret.

Aditi checks Harleen’s blood reports and advises some tests. Manav asks about the reports. Aditi tells that its Harleen’s test reports. Manav realizes that Pathak cheated him. Seema tells them that her friend has called to inform them about Sarabjeet, addressing a press conference. She asks Harleen to watch the conference. Harleen tells that she didn’t know about the conference. Sarabjeet declares that Param and Karan are his sons. Seema tells that everyone knows the truth, what’s there to declare.

The media asks the same question to Sarabjeet. Sarabjeet discloses the huge fact that Param and Karan are stepbrothers. He reveals that Karan isn’t his own son, he isn’t Karan’s biological father. He tells the media that Meher was in love with someone before her marriage, Karan is the child of her lover. The media asks Sarabjeet if he is saying the truth. He tells that he has accepted Karan as his child and gave his name, but Karan’s biological father is someone else.

Manav can’t believe that Sarabjeet has made such a big revelation to the media, which wasn’t expected. Sarabjeet gives strength to media. The media questions Meher about marrying Sarabjeet when she was pregnant with someone else’s child. They want to know the truth from Meher. Meher tells that she has married Sarabjeet to give birth to her child. She praises Sarabjeet for giving a life to Karan. The media asks Meher what was she mean. Meher tells that its her fate that she got married to Sarabjeet. She is lucky that she got a husband like Sarabjeet. The reporter asks Meher if she had lied to Sarabjeet.

He doesn’t want anyone to defame Meher. He tells them that he respects the people of the state and wanted to share the truth with them. He is proud of his wife that she is true and courageous. He tells that Meher was in love, she had undergone tough phase in life, her lover was stabbed to death. He tells that he will reveal the entire truth to the people without keeping any secrets. This makes Kulwant tensed. Kulwant doesn’t want to get arrested. Sarabjeet tells about the blackmailers. He wants Pathak to know that he isn’t scared of his blackmailing.

Kulwant doesn’t want the family to know about her crimes. She tells her sons that they have to stop Sarabjeet from making such revelation. She rushes out of the house to meet Sarabjeet. Kulwant’s Bahu get to see Sarabjeet’s revelation to the media about Karan’s real father. The media asks Sarabjeet if he wants to get rid of the blackmailing by the media’s help. Sarabjeet tells that he just wanted to tell the truth to the media and get their support.

He tells that the people have always supported him, prayed for his life when he was attacked, and blessed him. He wants the people to always love his family and bless them. He wants the people to respect Meher as well. He tells that respects his wife a lot. The reporter insults Meher and rages Sarabjeet. Sarabjeet warns the media from insulting his wife. The media asks him why isn’t he keeping the family secret to himself. Sarabjeet tells that he isn’t scared of any defamation in the society, that’s why he is breaking the truth to the media. He doesn’t want anyone to threaten Meher about the truth.

He doesn’t name Pathak as the blackmailer. He slaps Pathak by revealing the truth to the media. Robby finds Pathak in peace. He tells Pathak that Sarabjeet got to know his truth and kicked him out of the house. Pathak tells that he will charge 20 crores and also demand a party ticket by blackmailing Sarabjeet. Manav calls him to reprimand him for the cheat. Pathak lies that he had sent the report to Harleen. Manav threatens to ruin his life. He asks Pathak to watch the news once and know the consequences of his blackmailing.

Robby and Pathak find Sarabjeet revealing the truth to the media. They get afraid to see Sarabjeet’s fearless approach. Pathak can’t believe Sarabjeet’s daring act. Harleen calls Sarabjeet to stop him from revealing anything further. Sarabjeet doesn’t answer the call. Sarabjeet tells the media that the blackmailers have hurt his little son Karan and took his blood samples to get DNA test done. Sarabjeet and Meher cry for their son’s pain. Aditi feels someone has really hurt Karan.

Reviewed Rating for this particular episode Anupama 3rd December 2020 Written Update Vanraj wins support: 3/5 This rating is solely based on the opinion of the writer. You may post your own take on the show in the comment section below.