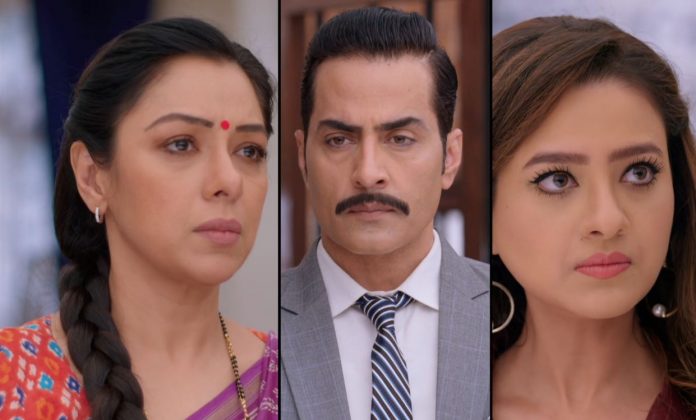 Anupama 8th December 2020 Written Update Ultimatum for Kavya Vanraj is hugely displeased with Kavya for entering his house and upsetting his mother. He doesn’t like the fact that she visited his house without his notice. He doesn’t want Kavya to create chaos in the house when he is trying hard to fix the wrong and win back the family. He knows that he is wrong himself, but still wants to project Anupama as wrong. Kavya’s interference in his family may lead him to lose his only support in the family Leela. Vanraj aims to have good relations with the family, so that they don’t sing Anupama’s praise.

He clears out to Kavya for the last time that his parents are like God for him and his children are his life. He tells her that he can neither leave his parents nor his children, not even for Kavya’s sake. Kavya is much hurt by his behavior. Later, Pakhi meets him and expresses her desire of celebrating her birthday with the entire family. She tells him that she wants to have a nice celebration at home, but the party will happen if he is part of the celebrations.

Vanraj agrees to Pakhi. She happily hugs him. Anupama tells Hasmukh and Leela that they will have a good birthday party for Pakhi. She tells that the happiness will stay forever. She plans to throw the best party ever to make it a memorable one for Pakhi. Kavya overhears Vanraj and Pakhi’s conversation.

She knows that Anupama will cook food to please Pakhi, but that won’t be enough. She wants to show Pakhi what real birthday party celebrations mean. She also plans a birthday party to compete with Anupama. What will happen when both Anupama and Kavya get into a head-to-head competition to throw the best party for Pakhi? Who will Pakhi choose? Will Pakhi get influenced by Kavya? Keep reading.

Hasmukh rebukes Vanraj for sending Kavya to the family to hurt Anupama. He asks Vanraj to make Kavya leave from Anupama’s house. He advises Vanraj to take Kavya’s permission before doing anything for his children, so that Kavya doesn’t vent her anger on Anupama. He tells that Vanraj’s misdeeds have ruined his name in the locality. He wants to live in peace at least inside the house. Vanraj makes an apology. He takes Kavya out from the house. He wants her to not create any drama and get inside the house. They make a leave.

Leela realizes that Vanraj isn’t happy with Kavya also. Anupama wishes that Vanraj stays happy at least. She doesn’t think for her sorrow and makes a selfless prayer. Meanwhile, Samar and Nandini meet at her home on their coffee date. They don’t want to lose their friendship if they can’t take their relation ahead. They take Anupama’s advice to always stay good friends. Samar’s feelings keep growing for him. He tells her that she can’t just create such drama in his family because of her insecurities when he is living with her.

She tells him that its his mistake to lie to her and give money to his family. He tells that he gave the money to Pakhi for her education. She can’t take it that he had hidden about the transfer. He tells that he never shares anything with anyone. He wants to fulfill his responsibilities towards his children. He refuses to take her permission every time he helps his children. She asks him to at least keep her informed. She tells that Anupama isn’t so innocent as she pretends.

He tells that Anupama isn’t so clever to plan such things. He declares that he can never leave his parents and children. He clears out that he can’t maintain a log book to update his day’s activities. He tells that his children may soon shift to his house. He asks her to remember what his family means to him, he is inseparable from them, he can never leave them for her sake. He wants her to just understand his situation. He vents his anger on Kavya. Hasmukh tells Anupama that Vanraj would scold Kavya.

Leela fears that Kavya will fight Vanraj and upset him. Pakhi tells the family that her birthday will be special when Vanraj comes. Anupama gives her word that she will invite Vanraj. Pakhi wants to go shopping with Vanraj like always. Samar asks Pakhi to go with Anupama. Pakhi argues with him. She doesn’t want to go with anyone, but just Vanraj. Anupama asks Pakhi to meet Vanraj at his office. Pakhi doesn’t want to face Kavya there. Leela tells that Kavya doesn’t do any drama in Pakhi’s birthday. She feels Vanraj will soon realize the difference between a wife and girlfriend soon.

Vanraj finds Kavya too upset with him. He fails to make up for his anger. Later, Paritosh and Kinjal have an emotional meet. She asks about Anupama. He tells her that he wants to have the same relationship with her. Kinjal reveals that Rakhi is forcibly sending her to the US. She feels their relationship is under threat. Paritosh wants Anupama to handle the matter. She tells him that she wants to marry him, since its about their life. Paritosh is glad that she is supporting him.

She asks Samar about the funds in her account. Samar tells that they have enough funds to plan a great party. Kavya meets Pakhi. Pakhi tries to ignore her. Vanraj knows that Pakhi won’t accept Kavya so soon. He informs Kavya that Pakhi wants to celebrate birthday at home and invited him. He shares the updates with her so that she doesn’t mind. Anupama wants to make Pakhi’s birthday memorable. She cherishes the old moments by seeing the old photo album.

Hasmukh regrets that Vanraj will come for the cake cutting ceremony. Leela just wants her son to come and never go away. Anupama tells that they will not let the happiness go away from their house. Kavya wants to pose a challenge to Anupama. She wants to surprise Pakhi. She asks Vanraj to permit her to plan something special for Pakhi’s birthday. Vanraj is pleased. She tells that she will arrange a party at an earlier time. She doesn’t want Vanraj to go home for Anupama’s organized party. She plans to throw a lavish party that Vanraj and Pakhi dislike Anupama’s simple homely efforts.

Pakhi is excited for her birthday. Samar tells Anupama that he has lifted the shopping bags for Pakhi. Paritosh brings Kinjal home for finding a solution. Leela doesn’t like her coming. Kinjal tells that she came to organize Pakhi’s birthday. Anupama defends Kinjal. Kinjal assures Leela that Rakhi won’t be coming to create any drama. Anupama is worried about the expenses. Samar tells that Vanraj paid for the shopping.

He tells that Pakhi bought a costly dress which was over budget, Vanraj had paid for it. He doesn’t want Anupama to turn upset. Anupama promises to make Pakhi’s birthday the best one till date. Anupama makes the beautiful arrangements and awaits Pakhi, who is busy with Vanraj and Kavya at another party. Kavya wants Anupama’s wait to get never-ending. What will happen when Pakhi doesn’t turn up at home? Keep reading.

Reviewed Rating for this particular episode Anupama 8th December 2020 Written Update Ultimatum for Kavya: 3/5 This rating is solely based on the opinion of the writer. You may post your own take on the show in the comment section below.

There will be a huge twist coming up when Rudraksh gets a shocker from Mahima. Mahima feels Saransh can never be safe with Khurana family. She tells that Rudraksh and Prisha have proved out to be failed as good parents for Saransh. She tells that Saransh will be living with her. She doesn’t want Balraj to have any claim on Saransh, knowing that Saransh is Rajeev’s son. She tells that Rajeev would also want Saransh to stay with his real mother. She asks Prisha to let Saransh go with her. Prisha is in dilemma while Rudraksh is hell-bent to not let go his kid. He doesn’t want to part ways with his son. What will Mahima do next? Will she join hands with Yuvraj? How will Ahana react when she learns the truth that Saransh is Rajeev’s son? Stay tuned.