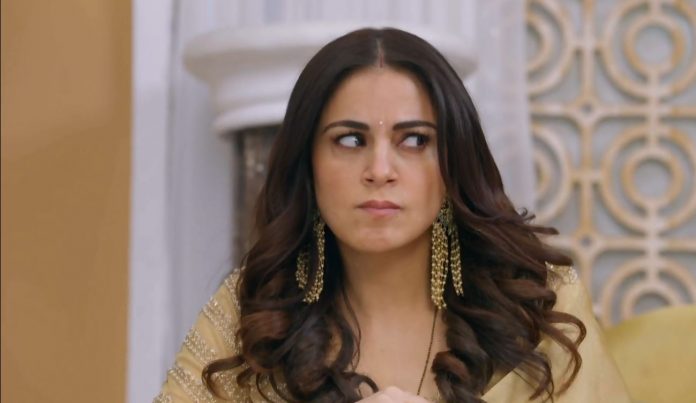 Kundali Bhagya 9th December 2020 Written Update Bold Preeta Shrishti tells that laddoos were exchanged. Janki asks Preeta why did Mahira lie. Preeta tells that Mahira has lied so that she doesn’t enquire anything to defend Sarla. She tells that both Sherlyn and Mahira are deadly. Sarla tells that Ramona wanted to defame Preeta and her. She feels Ramona was helping Mahira. She cries that Sherlyn has accused her for killing her unborn baby.

She finds a way to expose their plan. She tells that once she gets the poisoned ladoos, she will calls Shrishti home, she will prove Sarla’s innocence before the police arrives. Sarla is glad to know it. Preeta returns to Luthra house. She finds Mahira away. Mahira is taking a bath, when Preeta enters the room to find the laddoos containing poison. Mahira suspects someone’s presence in the room on hearing a sound. She asks who is outside. She asks Sherlyn if she has come. Preeta hurries in her move to find the laddoos. She leaves from the room.

She finally finds the laddoos box lying on the floor. She enters the room again and quickly picks the laddoos box. She gets evidence against Mahira. She realizes that Ramona got the same box. She finds the different laddoos in the box. She realizes that Mahira has swapped the laddoos. Preeta wants to stain Mahira’s face since Mahira has stained Sarla’s name. She goes to blacken Mahira’s face. She adds the black colour on the towel and hands over to Mahira.

She wants to teach a lesson to Mahira. She takes a little step to show her daring. She wants to prove Sarla’s innocence at any cost. After many episodes of shedding tears, Preeta finally does something bold that the viewers would definitely like to see. Preeta has to stop being calmly dumb when the enemies are striking her family. She has to take a major step to protect her mother. This time, Preeta doesn’t want to spare her enemies. She wants to clear the stain from Sarla’s name. Sherlyn and Mahira are going to pay big this time. Shrishti tells Preeta that they have to prove Sarla’s innocence as soon as possible.

Preeta informs her that she has found the poisoned laddoos. Shrishti shares her plan to expose Mahira and Sherlyn. Preeta finds Sherlyn around. She acts wise in the moment and tricks Sherlyn. Sherlyn gets scared seeing Preeta’s naughty smile reflecting something big is going on. Preeta makes Sherlyn tensed by her confident behavior. Sherlyn overhears a bit of her conversation. She wonders what’s the plan and why did Preeta return from Sarla’s house so soon. She wants to know Preeta’s plan, if its against Mahira or her. How will Preeta and Shrishti work out their mysterious plan and expose the evil duo, Sherlyn and Mahira? Keep reading.

Preeta adds the black colour powder in the towel for Mahira and hands it over to her. She hides the laddoos box in a drawer. Shrishti calls her to know if she got the sweets box. Preeta gives the good news that she got the sweets box in Mahira’s room, the laddoos were brought by Ramona, the sweets contained poison. Shrishti loses her cool. Preeta calms her down. Shrishti tells that Mahira poisoned Preeta and then blamed Sarla for it. She can’t believe that Ramona is doing this, being a mother herself. She wants Ramona to pay for her crime. She asks Preeta to follow her plan to prove Sarla’s innocence.

Preeta likes her plan. She is prepared to execute it. Sherlyn finds Preeta back. Preeta senses Sherlyn behind. She doesn’t let her know anything and leaves Sherlyn tensed. Sherlyn wants to find out Preeta’s room. She wonders if Preeta did anything wrong with Mahira. Sherlyn goes to see Mahira. She screams seeing Mahira’s blackened face. She asks Mahira to see her face.

Mahira blames her for handing over the towel to her. She confronts Sherlyn. Sherlyn tells that she didn’t do anything, she just came to the room. She tells that Preeta was leaving her room, which means she is behind the act. Mahira wants to teach a lesson to Preeta. She goes with her blackened face. Karan screams seeing her. He asks her to wash her face, she is looking real like she is.

Karan and Preeta get into their cute argument. He reminds their first meeting when she ruined his date. She asks him to have shame and not mention about his dates. She calls him a flirt. She asks him to at least ask her about Sarla. She tells that he shouldn’t flirt all the time. He tells her that he wishes that pretty girl she saw that day, she should have been in his life.

She tells that the girl wasn’t pretty at all, just like Mahira, who isn’t adorable. She jokes on Mahira. He agrees with Mahira, who was looking like a dark ghost. Preeta and Karan share a laugh. Mahira tells Sherlyn that he will complain about Preeta to Karan. Sherlyn tells that they have to take revenge on Preeta, nothing will help them if they complain to Karan. She washes her face and cleans off the blackness. Sherlyn wants her to stop. Mahira doesn’t want to spare Preeta.

Sherlyn wonders why did Preeta do this foolish thing, which doesn’t even matter. Mahira wants to throw the flour on Preeta and make her a white ghost. They get into a kiddish fight. Karan tells Preeta that he had to control his laughter in front of Mahira. Preeta adds that she was much angry on Mahira. Karan realizes that she has done this mischief. He doesn’t ask the reason. He tells that he is liking the new Preeta, she is promoted to his wife, even she got an attitude now.

He tells that she has done the right thing. He laughs a lot after many days. He tickles her to make her smile. They have a moment. Mahira finds them together happy. She tickles him by making him a statue. Karan and Preeta’s pillow fight makes them land into a romantic moment. Mahira angrily goes away and slips, giving a chance to Girish to hold her in arms. Girish gets dreams of marrying Mahira. Mahira lectures him.

Reviewed Rating for this particular episode Kundali Bhagya 9th December 2020 Written Update Bold Preeta: 5/5 This rating is solely based on the opinion of the writer. You may post your own take on the show in the comment section below.