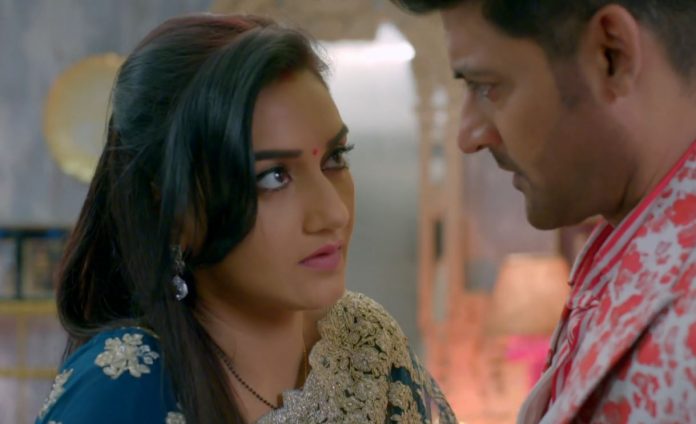 She tells Balraj that Rudraksh has tolerated a lot of torture in the family, he changed his life just for Rajeev’s son. She praises Rudraksh for his selfless act. Balraj cries knowing that Saransh is his grandson. He cries thinking that he had hurt Saransh a lot in the past. Sharda consoles Balraj. Prisha goes to meet Gopal. She promises to never go against his wish. Gopal wants Prisha and Mahima to stay happy. Rudraksh donates blood to Saransh. He finds his parents upset. He asks for Prisha. Sharda tells that Prisha has gone to meet Gopal.

She confronts Rudraksh about Saransh’s birth truth. He learns that Prisha has told the entire truth to them. Balraj breaks down. He hugs Rudraksh and sheds tears of sorrow and regret. He feels guilty. He tells that he has behaved badly with his own grandson. He wants his heir to live happy with them. He feels proud of Rudraksh that he got Saransh to their home. Balraj apologizes to Rudraksh and Prisha. Mahima tells them that its too late for the realization. She wants to take Saransh with her. She stops Rudraksh from claiming any rights on Saransh.

She tells that she will love Saransh a lot. She is ready to do anything to get Saransh’s custody. Yuvraj tells Mahima that he can help her, since she has a legal right on her son. Rudraksh asks Yuvraj to step back. He doesn’t think Mahima is mentally fit. Yuvraj asks Rudraksh to get the law decide. The family receives a good news that Saransh’s operation is successful. They have a happy moment. Saransh gets better till the morning. Doctor permits the family to meet Saransh.

Saransh tells Prisha that he is feeling okay, but still pain. Nurse asks the family to leave and let the patient rest. Mahima wants to stay with Saransh for some time. Prisha explains Saransh that Mahima isn’t a bad person. She tells him that Mahima is his mother, she won’t accept money and go away. Saransh tells that he wanted to get rid of Mahima by paying her money. Mahima feels hurt. Prisha asks Saransh to respect his mother. She tells him that Mahima will give him love if he gives a chance. Saransh understands when Prisha explains him.

Prisha feels proud of him. She brings Mahima and Saransh closer. Prisha and Rudraksh take care of Saransh as days pass. Rudraksh wants his son to recover soon. Saransh tells Rudraksh that he should never leave Prisha. Rudraksh tells that he told nonsense in anger, he will never leave Prisha. He apologizes to Saransh in a sweet way. He knows that Prisha and Saransh make a team and bully him. Mahima joins their happy family.

Saransh gets love from the entire family. He watches Rudraksh’s concert and enjoys. Prisha wants him to always be smiling. Balraj admires Saransh. He can’t meet Saransh’s eyes. He stays away from Saransh because of his guilt. Saransh observes Balraj who comes till the door every time and returns. Balraj wants to hug Saransh and love him. Saransh recovers from his injuries. Mahima wants to do a mother’s duty towards Saransh.

Reviewed Rating for this particular episode Star Plus Spoilers Update Top 2 Yeh Hai Chahatein: 4/5 This rating is solely based on the opinion of the writer. You may post your own take on the show in the comment section below.

Preeti wants to end Nandini’s memories from KT’s life. This leaves him furious. He confronts her for going against his word. She tells him that she is his wife, who has a right to protect her future. He doesn’t want to give her rights. She reminds his statement that he loves her. She asks him to keep Nandini out of his life. She tells KT that Nandini wants him back, will he go back to Nandini if he gets a chance. She asks him to make a choice. She feels that he is taking just revenge on Nandini and burning himself in the same fire.

She confronts him for not letting Nandini leave the city by filing a case on her. Preeti tells KT that she is close to him and feels hurt to see him in pain. She wants him to move on if he could marry her by his will. She asks KT to become cheerful as before. He doesn’t want her to nag him like a typical wife. He asks her to be on her own and stop depending on him. She realizes that he didn’t get her point. Preeti’s saree catches the fire. KT spots the fire. He saves her by burning his own hands. Preeti and KT are seen caring for each other.

Meanwhile, Juhi and Sumedh have new troubles because of the shop’s loss. Kusum hands over her deposits and jewellery to them. She asks them to accept the help and build their business once again. Juhi refuses to take the assets which actually belong to Kusum’s daughters. Kusum asks Juhi to not think of the girls’ future. Sumedh assures that they will find some way. Juhi just wants Kusum’s blessings. They refuse to sell Kusum’s jewellery. Juhi asks Kusum to not tell Preeti about their shop’s loss. Preeti and KT express their concern for each other.

On the other hand, Priyanka goes to the hospital to fulfill Amit’s command. She gets ousted by the doctor. Neil meets Priyanka. He learns that Amit wants a character certificate from her. He asks her not to marry Amit, who will never respect her. She tells that she is helpless to marry Amit for the sake of family. She requests him not to tell anything to Preeti. Neil feels bad for her. Priyanka informs Amit that she went to get the tests done, but the doctor refused. Amit calls her a liar. She asks him to break the alliance if he wants. Kusum overhears Priyanka’s conversation and misunderstands her. Preeti comes to help Priyanka.

She tells Priyanka that Neil told her the entire matter. She calms down Kusum. She reveals about Amit’s wrong demand to trouble Priyanka. Kusum feels terrible that Priyanka had tolerated a lot. Preeti asks Kusum to support Priyanka. Kusum is afraid that Priyanka’s alliance will break. She fears for Priyanka’s future. Preeti tells Kusum that respect and love matters in a marriage. Later, Preeti and KT get into a moment. Nandini arrives home with a shocking news of Arjun’s suicide. She tells KT that Arjun is missing, she is afraid that he ended his life. She wants KT’s help. Preeti consoles Nandini. Nandini wants KT to accompany her and search for Arjun.

Reviewed Rating for this particular episode Star Plus Spoilers Update Shaadi Mubarak: 3/5 This rating is solely based on the opinion of the writer. You may post your own take on the show in the comment section below.