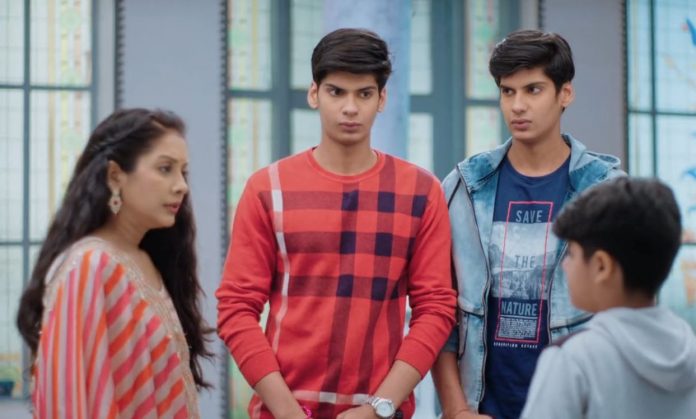 Yeh Rishta Gayu rebukes Lav 8th December 2020 Written Update Kartik praises Naira for giving such a nice idea. They hope their idea works. Riddhima asks Kairav to get his feelings out on the canvas through the power of art. Kairav thinks a lot, which makes Riddhima sure that Naira’s idea has flopped. But Kairav keeps Naira’s faith. He paints on the canvas to express his feelings. Riddhima is surprised to see Naira’s trust winning. Naira’s plan succeeds. Kartik and Naira rejoice.

Riddhima tells that Naira’s idea worked, which was unexpected. Kartik tells that a therapist can’t know a child like a mother. He feels Naira knows Kairav really well. Naira tells Kartik that Kairav will be recovering now by expressing his feelings by his paintings. She suggests that they keep a painting class for him. Kartik tells Naira that he will just do as she tells. Riddhima gets back to Kairav. Kartik asks Naira to give him a treat to celebrate their success.

Naira gives him the credit for the success. Kairav makes a beautiful plant in his painting. Riddhima starts seeing her son in Kairav, who she lost long time back. Kairav tells Riddhima that Naira used to call him a moon. His words make Riddhima notice the fact that he is just like her son. She hugs him with love. Naira makes cup cakes for Kartik and Kairav. Kartik asks Kairav to have the cup cakes made by neighbor Aai.

He tells that he had told Aai that Kairav has started painting. Kairav likes the cup cakes and thanks Naira. Naira wishes that they unite soon. Riddhima feels a storm in her heart when Kairav revives her motherly emotions. She finds a connection with Kairav. Later, Kartik and Kairav dress up. Kartik has to drop him to the school and go to the college for work. Kartik and Kairav send their swag selfie to Naira. Riddhima meets Kartik. She tells him that she will take Kairav to the art fest. She tells Kartik that Kairav has to miss his school. Kartik permits her to take Kairav.

On the other hand, Lav and Kush enjoy Krish’s song. They want to know the truth from Krish, if Kairav had pushed Vansh down. Krish tells them that Vansh had lied due to fear, Kairav can never hurt him. Lav asks the reason for the lie. Gayu rages at Krish for calling Vansh a liar. She tells Krish that he shouldn’t say anything wrong with surety, until he has an evidence. She reprimands him for speaking against Vansh. She reminds Lav and Kush that Naira had sent them to remand home. She tells them about Kairav’s mistakes. She tells that Kairav was caught with a gun in his school.

She warns Krish to stay away from Vansh if he wants to be good to Kairav. Lav and Kush find the family tension getting high. Riddhima takes Kairav to the art fest. Naira thanks Riddhima for such a suggestion. She appreciates Riddhima’s hard work. She asks Riddhima to come back soon. Riddhima doesn’t want to drop Kairav soon. She takes Kairav for lunch. Naira waits for Kairav.

Riddhima tells Kairav about her son. He gets excited to know more about her son. She likes to spend time with Kairav. Naira is tensed when Kairav doesn’t come. She keeps calling Riddhima. Riddhima doesn’t see her calls. Naira looks upset to Kartik. She calls him for a talk. She asks him about Kairav. Kartik tells her that Riddhima had informed him that they will be coming late. He wants Naira not to worry and trust Riddhima. Naira doesn’t want Kairav to stay hungry. The watchman finds them romancing and calls the secretary.

He wants to expose Kartik and Naira’s affair to the secretary. Kartik takes a chance for romance when the lift gets stuck. Watchman asks the secretary to confront Kartik and Naira for their affair. Secretary asks watchman not to accuse anyone if he has no proof. Kartik tells Naira that they can romance in the lift. Naira finds Riddhima interfering a lot. Riddhima shows her annoyance to Naira’s objections. She tells Kartik that she will quit Kairav’s therapy. What will Naira do now? Keep reading.

Reviewed Rating for this particular episode Yeh Rishta Gayu rebukes Lav 8th December 2020 Written Update: 4/5 for Lav and Kush’s positive efforts to unite the family This rating is solely based on the opinion of the writer. You may post your own take on the show in the comment section below.