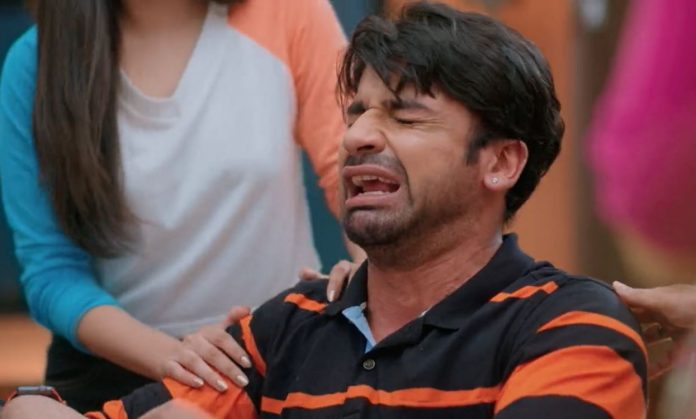 Anupama 12th December 2020 Written Update Sudden outburst Rakhi arrives home. She hurts Anupama. Leela asks Rakhi not to show any drama to the neighbors by arguing on the roads. She calls Rakhi inside the house. Rakhi tells Leela that she didn’t come to talk, but to create a drama, she wants an audience. She asks the family to come out and see the drama. She tells the family that she has come to insult them for being so shameless. Anupama stops her.

Rakhi tells that she will not stop herself from humiliating them, so that they don’t get after Kinjal again. She felt that they will be breaking relations with Vanraj, but they have no self-respect, they are still having terms with him. She asks Anupama why does he welcome Vanraj home when he cheated her. She tells that she understood that they are not great people, but they are needy people, they want money from Vanraj to run the house. She asks them how can they forgive Vanraj for his affair, for his live-in with Kavya.

She tells that its disgusting that they have been inviting Vanraj for the sake of money. She asks them if they will suffer when Vanraj doesn’t provide them money, if he loses his job for some reason. She asks Anupama if she will make Kavya her friend for the sake of money. Leela asks Rakhi what does she mean. Rakhi explains them. She tells that her friend’s husband was also such, he had multiple affairs and got forgiven by his wife, his wife wanted money, a house can’t run without money. She asks Anupama to forgive Vanraj and Kavya as well, since Kavya also earns.

She tells that maybe Vanraj has taken Kavya’s earnings as well. She asks Anupama if she knew the affair truth before. She comments that Anupama got the compensation for sharing her husband with Kavya. She humiliates them further. Anupama loses her cool. She stops Rakhi from insulting the elders. She tells that Vanraj comes home because he has a relation with elders and children. Leela also answers back Rakhi. Anupama tells that they have decency to run the house.

Anupama advises her to talk about Paritosh and Kinjal’s alliance if she do cares for her daughter. She sings praises of her good family. She tells that she didn’t get any money on which they don’t have a right. Rakhi tells that she had come to talk about Kinjal. She asks Paritosh to forget Kinjal. She takes the engagement ring from him. She hurts him. She tells that he deserves this pain, because he is Vanraj’s son. Leela asks Rakhi if she is drunk. Rakhi tells them that she wants to clear their misunderstanding, Paritosh and Kinjal will never get married. She doesn’t want to keep any terms with them.

She declares that she is going to send Kinjal to the US. She warns Anupama against brainwashing Kinjal to get them married. She asks Paritosh not to invite Kinjal for any reason. She threatens to call the cops if Paritosh dares to meet her daughter. Anupama tells that Rakhi is doing wrong to separate the children. She asks Rakhi to see Kinjal’s happiness. Rakhi doesn’t think Anupama can handle the family. She taunts that Anupama has failed in her marriage. Anupama answers Rakhi in a way that Rakhi ends the arguments.

Anupama tells that Paritosh and Kinjal will unite if its in their fate. She knows that Rakhi is breaking the relationship because of her ego and obstinacy. She asks Rakhi to think of her daughter’s happiness. Rakhi tells that love is just an illusion, love isn’t important than luxuries. She tells that she doesn’t want any betrayal and poverty in Kinjal’s life. She calls it their last meeting and leaves them with a stern warning. Kinjal arrives there on Nandini’s call. She wants to know why did Rakhi come there.

Rakhi reprimands her for lying to her and meeting the Shah family. She wants to take Kinjal to the US and get her married to a nice guy. She warns Kinjal against meeting Paritosh again. She tells that Shah family will be in jail if she meets them again. Kinjal feels scared of her anger. She sheds tears on losing her love. On the other hand, Paritosh breaks down. He didn’t know he will pay for his father’s mistake. Anupama tries hard to console Paritosh. Paritosh goes crazy. He tells that he can’t live without Kinjal. He blames Vanraj and Kavya for breaking his alliance. Leela wants Anupama to call Vanraj.

Hasmukh doesn’t think Vanraj can help Paritosh. Leela tells that Vanraj will handle Paritosh, Vanraj loves Paritosh a lot. Anupama feels the need to call Vanraj. She calls Vanraj, who is with Kavya. Kavya reacts on seeing Anupama’s call. Vanraj gets tensed to answer. She permits him to answer. Anupama wants Vanraj to meet her for Paritosh’s sake. Vanraj wants to know the matter.

Anupama tells him about Paritosh’s condition. She learns that he is still with Kavya. She tells that Paritosh is out of control, he may take any wrong step in his depression. Vanraj loses his cool on knowing that Rakhi insulted the family again. Kavya tells that its better that Rakhi didn’t get related to the Shah family, she will never leave them in peace. Vanraj argues to defend his son. He tells that Paritosh and Kinjal love each other a lot. She suggests him to plead Rakhi.

Vanraj can’t tolerate Rakhi. He decides to take a big move and solve the problem by meeting Anupama. Kavya feels Anupama is ruining her life. Anupama apologizes to Hasmukh that she had called Vanraj for the sake of Paritosh. She tells that she has decided a do a job for the smooth running of the family. She isn’t sure if she will get a job, but she wants to make a try. Leela reacts on knowing her decision. Vanraj will be seen returning home after Anirudh comes back to Kavya’s house for a stay and creates a scene. What do you think about Rakhi’s decision for Kinjal’s life, is she right as a mother to secure her daughter’s future by neglecting Kinjal’s true love for Paritosh? What will Anupama and Vanraj do to help Paritosh? Keep reading.

Reviewed Rating for this particular episode Anupama 12th December 2020 Written Update Sudden outburst: 2/5 This rating is solely based on the opinion of the writer. You may post your own take on the show in the comment section below.