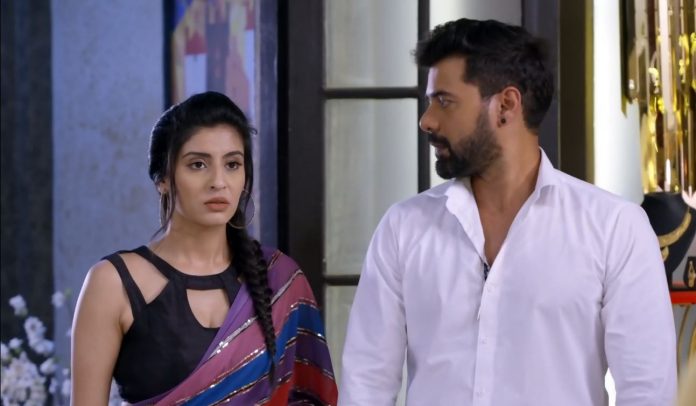 Kumkum Bhagya 15th December 2020 Written Update Pragya attacked Sarita enjoys the window shopping. Pragya wants to go home. Sarita tells that she still wants to continue the fun. Sarita tries the jewellery. The staff lady asks Pragya to come for the surprise. Meera enquires about Abhi and goes to see him. Pragya goes to meet Ramnik again. Meera helps a lady, while Tony hides the dagger from them. Meera gets busy. Pragya meets Ramnik. He asks her to try the ring selected by Abhi. Tony tells Ramnik that he took Abhi to the network zone for making a call. Pragya refuses to buy the ring.

Ramnik wants Pragya to try the necklace. He wants to sell it to Abhi. Pragya gets forced to try the diamond necklace. Pragya tries the necklace and the ring. Abhi returns after making a call. Ramnik tells him that his wife has tried the jewellery. Abhi and Pragya meet again. Meera reaches late and gets upset seeing Pragya. Abhi compliments Pragya. Rhea tells Ramnik that Meera is Abhi’s would-be wife, Pragya isn’t Abhi’s wife. Meera makes a leave. Rhea insults Pragya for snatching Abhi when Prachi failed to snatch him. Abhi warns Rhea.

Abhi asks Pragya to let Rhea leave. Pragya tells that he can’t stop her from meeting her daughter. Ramnik apologizes for the mistake. The staff lady apologizes that she didn’t know the truth. Abhi and Pragya argue and angrily get away. Ramnik asks Tony to take the necklace and keep it in the locker safely. Tony plans to snatch the necklace from Pragya.

Meanwhile, Ranbir decides to meet Prachi and tell her the truth of his marriage fixed with Rhea. Tony’s gang robs the jewellery. They want the necklace as well. They decide to kill Pragya if she doesn’t give the necklace. Abhi wants to talk to Pragya. She expresses her unhappiness that he is moving on. She vents anger on him. He tells her that she should try to stop the marriage. She wants to know if he will not marry Meera if she tells him. He wants her to say it once. They have a moment when they have a big confrontation. Pragya soon get attacked by the robbers.

Pragya feels fed up by asking for her rights. She asks Abhi to give the right to anyone he wants. She tries to pull out the ring. She gets hurt. Abhi helps her. He can’t see her hurt. Meera comes there to ask Pragya if she needs help. She wants to talk to Pragya about Abhi and her marriage. Abhi doesn’t want Meera to know that Pragya and he are together in the washroom. Meera asks Pragya if she has any objection with the marriage.

Pragya tells that there is nothing left between Abhi and her, she has no objection about Abhi’s marriage. Meera feels relieved. She thanks Pragya for lessening the burden. Pragya is thankful that Meera relieved her and now even she can move on in life. Abhi angrily hears Pragya’s statement. Meera is worried seeing him with Pragya. She is glad that things are sorted. She calls Aaliya to inform.

Tony tells the gang that Pragya would be wearing the necklace even now, if she has removed the necklace, even then she would be having the necklace. Pragya returns the necklace to Abhi and goes away. Tony looks for Pragya. Rhea calls Ranbir and tells him that she has bought a ring for him. Ranbir tells her that things aren’t finalized yet, she shouldn’t buy the ring so soon. He sees Prachi on the video call. He enquires about Prachi. Rhea tells that she had a fight with Prachi. He grows restless to meet Prachi at the mall. Pragya doesn’t see Rhea, which makes the latter feel that Pragya is avoiding her.

Meera tells Aaliya that its strange that Abhi is still with Pragya. She feels she is making a mistake. She tells that she had seen Abhi and Pragya together. Aaliya doesn’t know what’s happening. She asks Meera where is she right now. Sarita consoles Pragya on seeing her crying. Pragya doesn’t know how to tell Sarita about Abhi’s marriage with Meera. She tells Sarita that Abhi has proposed Meera for marriage. She can’t tolerate to lose Abhi. She tells Sarita that the shopkeepers were mistaken and were showing the jewellery to her. She breaks down. Sarita wants to fix the wrong in Pragya’s life by talking to Abhi.

Reviewed Rating for this particular episode Kumkum Bhagya 15th December 2020 Written Update Pragya attacked: 2/5 This rating is solely based on the opinion of the writer. You may post your own take on the show in the comment section below.