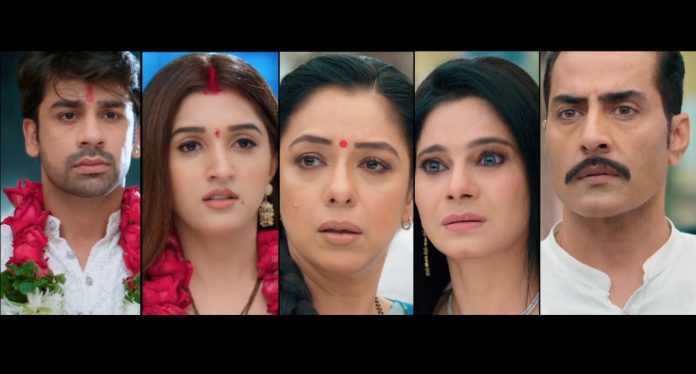 Anupama 16th December 2020 Written Update Huge storm Rakhi shouts that Paritosh has made Kinjal elope by misleading her. She accuses their upbringing. Leela asks Rakhi to not defame her own daughter. Rakhi tells that she is just telling the truth. She tells that Vanraj is also at fault, so his son has to be at fault. Vanraj stops her from crossing limits. Rakhi tells that Paritosh isn’t wrong, he has learnt this from Vanraj, who has a girlfriend in this age when he already has a wife.

She tells the inspector that she broke the alliance from the greedy and cheap family. She asks the inspector to save Kinjal before the family hurts her. Anupama stops Rakhi from crossing her limits. She tells that her family is her pride and she won’t hear anything wrong about them. She threatens Rakhi. Rakhi wants the police to find her daughter. She cries a lot out of concern for Kinjal. Anupama cries for Kinjal. She tells that even she loves Kinjal as her daughter. She asks Rakhi to support her and find the children. Vanraj agrees with Anupama.

He tells the inspector that they worry for both the children. Rakhi accuses Anupama for supporting Paritosh in the elopement. She wants Anupama to pay for the crime. She asks the cops to arrest Anupama. Inspector takes Rakhi’s report and agrees to arrest Anupama. Leela and the entire family take a step to help Anupama. They don’t want Anupama to go. Hasmukh tells that Anupama won’t go anywhere. Vanraj yells at Rakhi. He tells that Anupama isn’t at fault, she shouldn’t face any arrest. He files a counter case on Rakhi. He tells that law is same for everyone.

He adds that he will accompany the police. Rakhi wants Inspector to arrest her as well. Rakhi finds the family mad. Amidst the chaos, Paritosh and Kinjal make an entry and stop the arrest. The family is stunned to see them married. Kinjal’s sindoor shocks Rakhi the most. Kinjal tells the cops that she has married Paritosh by her own wish. Paritosh adds that they got married by their wish, they are not against the family, but had to take the step for the registered marriage.

Rakhi breaks down by her daughter’s move. Inspector tells Rakhi that he can’t help her now. Rakhi feels Paritosh has misled Kinjal. Inspector apologizes to Rakhi, since Kinjal is an adult and married by her own wish. After the police leaves, Paritosh apologizes to the family. He tells that he had no option than to marry Kinjal to stop her from going to the US. He didn’t wish her to leave from his life. Anupama wants to welcome Kinjal home. Rakhi goes to slap Kinjal. Anupama takes a stand for Kinjal. She wants Rakhi to know Kinjal’s new place in the Shah family.

Rakhi wants her rights on her daughter. Anupama tells that Kinjal is her Bahu now. She doesn’t want to blame the children knowing the elders are at fault. She supports Paritosh and Kinjal. Rakhi threatens to see Anupama. She tells that she will not let them live in peace. She asks Kinjal to get ready to face her wrath. Leela asks Rakhi not to vent her anger and ruin Kinjal’s happiness. Rakhi feels shattered and disappointed with Kinjal. Kinjal sheds tears. The neighbors get another topic to gossip about Vanraj and Paritosh. Anupama takes the newly weds home.

Rakhi wants to punish Anupama’s entire family for snatching her daughter. She goes mad in anger. Vanraj too vents anger on Paritosh and Kinjal, while Anupama welcomes her Bahu by the Grahpravesh. Vanraj feels Paritosh didn’t give him a chance to speak to Rakhi. He blames Anupama for supporting Paritosh’s love story. Anupama tells that everything went well, the children had to get their happiness. She asks Paritosh if he didn’t trust his parents. Kinjal feels sorry. Paritosh tells that he had taken this step in fear of losing his love. Vanraj tells Kinjal that she already knows her mom. Anupama asks Vanraj to stop rebuking them.

Leela tells that Rakhi will not leave any chance to harass them, she will always plan anything against her. She fears that Kinjal will bring destruction for the family. She doesn’t want a daily drama because of Kinjal. Kinjal decides to go away. Paritosh tells that if the family has a problem with their stay, then its better that he takes his wife away. He tells that his parents also got selfish. He counts Vanraj’s mistake of breaking his marriage. He answers Leela’s taunts. Anupama wants to stop her son. Paritosh tells her that Kinjal has left her parents and a lavish life for the sake of his love, she doesn’t deserve the taunts. Anupama gives them a place in the house.

On the other hand, Kavya doesn’t know the recent happenings in Shah family. She calls up Vanraj. He doesn’t respond to her calls and messages. She wants to know where is he staying. Anirudh gets a cup of coffee for her. She throws it away. She doesn’t like him to call her a wife. He tells that Anupama is Vanraj’s legal wife, while Kavya means nothing. He laughs at Kavya for loving such a man who has no place of his own.

Kavya is tired taking a stand for Vanraj. She wants to know Vanraj’s whereabouts. She recollects that he was going to leave from his house when she last spoke to him. Anirudh tells that her state will always be the same, she will always in the waiting list in Vanraj’s life. Anupama asks the family not to accuse Paritosh and Kinjal, they have faced a lot because of the elders. She knows that Paritosh and Kinjal wanted to marry by their blessings. Vanraj tells that none can defend Paritosh.

He forgets that he was going to secretly marry Kavya for his love. He blames Paritosh for getting troubles for the family in the form of Rakhi. He tells that Rakhi will ruin them. Anupama wants to love and respect Kinjal as much as they love Paritosh. She respects their marriage vows. She feels sad that Vanraj has broken his vows. She taunts Vanraj for making their marriage a joke. She tells that a relationship is never a joke, even if its weak. Leela promotes Anupama to the next level of responsibilities. Anupama guides Kinjal as a good Saas. Kinjal faces criticism from Leela.

Reviewed Rating for this particular episode Anupama 16th December 2020 Written Update Huge storm: 4/5 This rating is solely based on the opinion of the writer. You may post your own take on the show in the comment section below.