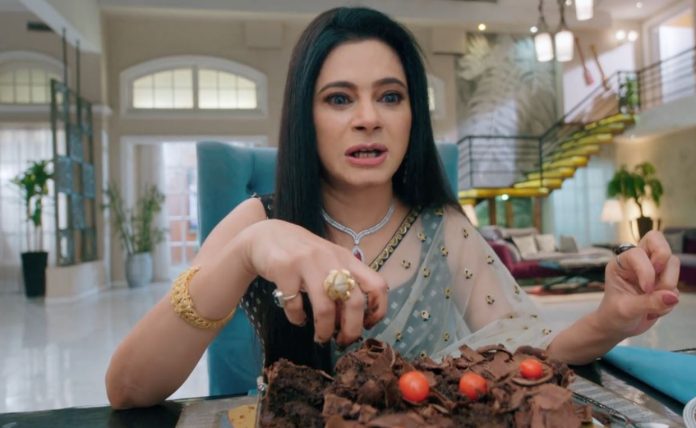 Anupama 17th December 2020 Written Update Rakhi avenges Vanraj permits Anupama to do her wishful. Leela tells Anupama that Vanraj is right about Rakhi, who can’t be handled. She asks Anupama to convince Rakhi if she can. She reminds Anupama that its a tough thing to lead as a Saas, since she will be balancing between her son and Bahu. She tells that she has to share Paritosh with Kinjal, he will listen to Kinjal more and even then she has to tolerate this. She tells that Anupama will always be called Saas even if she loves Kinjal as a mother.

She tells that she knows that its really like a crown of thorns to take this responsibility. Anupama doesn’t get deterred by Leela’s negative words. She is positive and wants to become Kinjal’s friend. She feels happy with the realization that she has been promoted to a Saas level. She knows her duties. She wants to become a mother for Kinjal. Paritosh, Pakhi and Samar try to console Kinjal. Samar asks them to think what will happen in their future. He tells that they should leave all the worries, since Anupama is with them.

Anupama reaches Kinjal to support her as a mother. Samar knows his mother is the best, she will not scold Paritosh for the mistake. Anupama explains Paritosh and Kinjal that they didn’t choose the easy way, they have to move on if they have chosen it. She tells that they have to keep heart of the family and prove themselves to be the best. She tells that the family is hurt by loss of faith. She asks Paritosh and Kinjal to remember that they should win over the fights with inner self, but lose when the fight is with the family.

She adds that they have already got their love, now they have to take blessings from both the families so that their marriage gets auspicious. Paritosh and Kinjal start with Anupama and take her blessings. She tells that she will always be with them. Meanwhile, Leela is upset because of Rakhi. She tells that the neighbors had made videos and made it viral, they have lost the family respect. Hasmukh asks her to be thankful that Anupama didn’t land in jail. He tells that she can’t find a solution by panicking. Leela tells that she didn’t get happy when Anupama joined the family and now the same thing is with Kinjal. She feels the real storm is about to happen.

Kinjal gets emotional seeing the respect given by Anupama. She adjusts in the family. Anupama asks Kinjal not to lose her dreams and identity while keeping her responsibility towards Paritosh and in-laws. Kinjal finds Anupama a cool Saas. She praises Anupama as a person. Anupama gifts her bangles as Shagun. She promises to buy something of Kinjal’s choice soon. Kinjal feels lucky to get a Saas like Anupama.

She promises to try to become like Anupama. Leela asks them to make Halwa and stop the sweet talks. Anupama asks Kinjal to add the sugar in the Halwa to fulfill the first Rasoi rasam. Anupama guides Kinjal. She asks her to give the sweets to the family members. Hasmukh blesses Kinjal and gives her Shagun. Leela wants to insult Kinjal because of her mother. She stays aloof. Kinjal loses her cool when Leela taunts her a lot. Leela insults Rakhi as well. Kinjal cries on receiving Leela’s hatred. Anupama asks Kinjal to take Lela’s anger as blessing. Leela refuses to have the sweets. Anupama takes Kinjal to Rakhi’s house with a hope to fix things. What will be Rakhi’s decision? Do you find Rakhi right on her front? Comment below and keep reading.

Reviewed Rating for this particular episode Anupama 17th December 2020 Written Update Rakhi avenges: 5/5 This rating is solely based on the opinion of the writer. You may post your own take on the show in the comment section below.