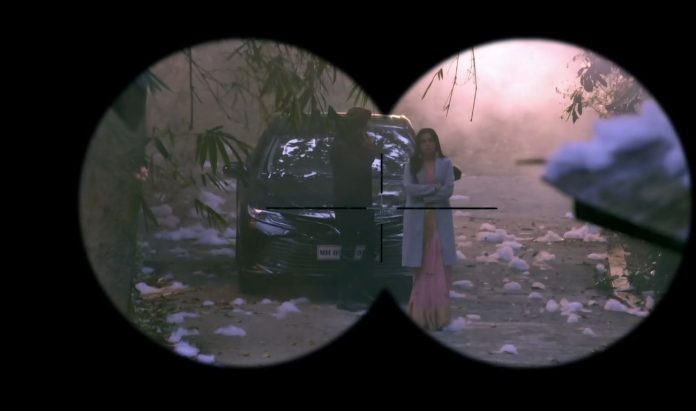 He wants to call his mechanic for help. He tells that they can go to the nearby Dhaba and wait for the mechanic. Preeta agrees to him. Karan calls the mechanic. The thieves spot the couple and plan to rob them. Karan tells that mechanic would be coming in an hour. He locks the door and takes Preeta with him. They don’t know about the threat on them. Sarla gets surprised when Rakhi comes home. Rakhi tells that she was just checking the old clothes when she found it in the trunk. She wants to donate the old clothes. Rakhi tells that she just came for a meeting. Janki asks Rakhi to have tea made by Shrishti. Sarla is surprised to know it.

She knows that Sarla was willing to come and got hesitant to come. Rakhi asks Sarla not to think that Luthras don’t like her. She knows that Kareena has a different thinking, but still they all are one family now. She handles the relations so well. Sherlyn tells Mahira that she has done all the preparations. The goon informs Mahira that he has damaged Karan’s car and it broke down on time on the bypass road. Mahira is happy with his work. He asks her to send the payment. Mahira tells Sherlyn that Yadav has done his work. Sherlyn asks Mahira to get ready for the trip.

Rakhi pacifies Sarla that Preeta will always get respect in her family, they will give her much love and acceptance. She assures that she will fix the problems in Preeta’s life. She asks Sarla not to hesitate to come to meet Preeta at her Sasural. Sarla tells that she will remember it well. Sameer is glad to see their bonding. He goes to meet Shrishti. Karan and Preeta like the snowy roads. Preeta tells that everything is so beautiful. She feels cold. He tells that she is not so fit like him, that’s why she got tired so soon. He wants her to enjoy the sight. He apologizes that their car broke down because of his mistake.

Shrishti struggles to make ginger tea. She finally gets help from Sameer. Sameer helps her and gets accused. She doesn’t want him to increase her stress. She wants to put a good impression on Rakhi. Sameer finds a chance to romance her. She asks him to stay away. He makes Shrishti shy by getting close to her. He tells her that he didn’t do anything and still she is hesitant. They both have a moment that develops their love story.

Janki finds them romancing. She tells that they are also like Karan and Preeta, love birds. She asks them to come out from the kitchen if they want their romance to not get caught. Preeta and Karan reach the Dhaba. She tells Karan that he may stay fit and do some exercises until she eats the food. Karan tells that he is also feeling hungry. She orders oily food for herself. What will Mahira do? Will Karan and Preeta realize that they are being watched? Keep reading.

Reviewed Rating for this particular episode Kundali Bhagya 18th December 2020 Written Update Preeta watched: 5/5 This rating is solely based on the opinion of the writer. You may post your own take on the show in the comment section below.