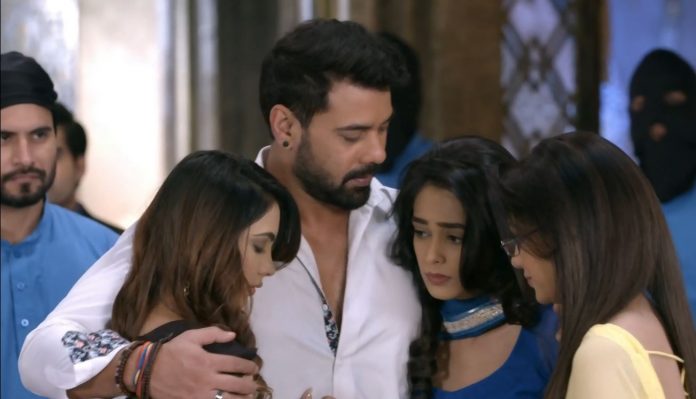 Kumkum Bhagya Latest today Abhi Pragya possible union Tony and gang look for the key. They don’t get the key and question Abhi. Abhi tells that Prachi doesn’t lie, because she has Pragya’s upbringing. He has much faith on his daughter. Tony finally gets the key and also the necklace. Rhea is worried for Abhi. She asks Pragya why did she let Abhi go. Prachi defends her mother. Rhea and Prachi get into an argument over their parents. Pragya gets fed up of their fights.

Rhea wants Shahana to stay out of her family matters. Pragya tells them that she knows Abhi well, he will make sure that nothing happens to his family. She wants Abhi’s return. Sarita asks Pragya to give time to Rhea and Prachi, they will unite soon. Abhi returns to them. Rhea hugs him. Abhi hugs Prachi. He tells that he is totally fine. Pragya also joins them. Guru tells that everyone should be thankful to Abhi, who saved their lives by getting the necklace. He tells that the love between Abhi’s family is great. He wants to keep his promise.

He asks the people to just go away. Rhea tells that she has bought her jewellery and wants to take it. Tony tells that Abhi would buy expensive jewellery. He asks her to leave the jewellery. Rhea refuses and puts Abhi in trouble.

Ranbir tells Saaho that he wants to save his family. Saaho promises to save everyone. Ranbir, Aryan, Meera and Aaliya go against the law to enter the showroom for their loved ones. Rhea beats a robber. The robbers get mad and decide to kill everyone. Pragya consoles Rhea, while Abhi fights the robbers.

Abhi makes the robbers drop the guns. He gets the situation under control. Pragya and others throw away the weapons. Abhi gets into a tussle with Guru. Abhi asks everyone to leave. Guru takes the gun from Abhi. Abhi gets shot. Rhea gets blamed for it, since she didn’t get the jewellery. She asks Abhi to get up and save her. The robber threatens to shoot her. Pragya fails to hear Rhea’s call for help. Saaho lets Ranbir come along. Pragya realizes Rhea is in danger. Abhi gets up and fights the robbers again. Pragya stands helpless and looks for Prachi.

Prachi also falls in danger. Pragya runs to save Prachi. Rhea finds Pragya saving Prachi, and ignoring her call for help when she cries for her life. She sees Rhea caught by the robbers and fights for helping him. Saaho reaches the scene late and commands the robbers to surrender. Ranbir and Aryan assist the police in nabbing the culprits. Meera and Aaliya meet Rhea when Pragya wants to enquire about Rhea. Pragya gets late. Sarita tells Abhi that Pragya has always been fighting with her fate. She wants Abhi to give happiness to Pragya.

She asks him to promise to fix up things, Pragya should get happiness which she deserves. Abhi promises her. Abhi and Pragya part ways again because of their daughters. They have a clash because of their ego. Aaliya wants Ranbir to come with them, Aryan will drop Prachi home. Vikram and Pallavi welcome Abhi and family home. Ranbir tells that Abhi has fought bravely. Rhea tells that she has bought the jewellery for Meera. Aaliya tells that Aryan had gone to drop Prachi’s family. Prachi asks Aryan about Ranbir, if there is anything to worry that Ranbir wants to convey. Aryan lies that there is nothing such. Prachi thanks him. She realizes that Ranbir is hiding something from her.

Reviewed Rating for this particular episode Kumkum Bhagya Latest today Abhi Pragya possible union: 5/5 This rating is solely based on the opinion of the writer. You may post your own take on the show in the comment section below.