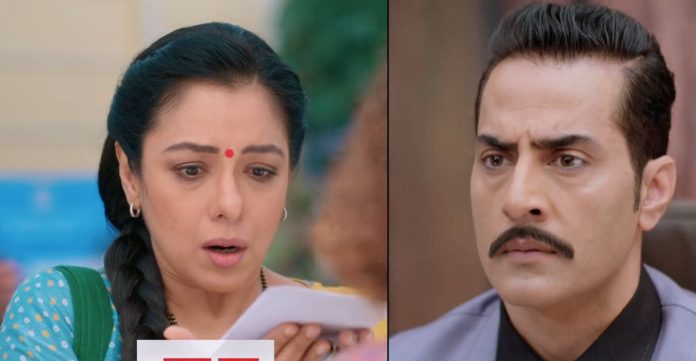 Anupama 22nd December 2020 Written Update Vanraj on verge Anupama and Rakhi have the same concern for Kinjal. Rakhi doesn’t like the way Kinjal started behaving after becoming a part of Anupama’s family. She wanted Anupama to take Kinjal to a doctor. She tells that Kinjal will take care of her own diet and stay fit. She ensures that she will be supplying the proper food for her daughter. She doesn’t want her daughter to have food allergy. She has been worrying for her daughter. She tells that she can afford anything, but not afford to see Kinjal ill. Anupama tells that they can arrange the best food for Kinjal.

Rakhi doesn’t want Anupama to offer healthy and oily food to Kinjal which will not suit her. She feels that she is doing her part and looking after her daughter. When she learns about Anupama’s job, she realizes that Kinjal will be groomed as the new maid. She taunts Anupama for retiring from the kitchen and fitting Kinjal there. She tells that Anupama will be making her career, while asking Kinjal to sacrifice her flourishing career. She expected Anupama to keep Kinjal happier. She wants Kinjal to see the difference between her mom and mom-in-law.

She tells that she wants Anupama to be present when she speaks about the marriage functions. Anupama is speechless just because of her love for Kinjal, but Leela doesn’t control her tongue. Leela asks Rakhi to get Kinjal’s dad and talk to them about the marriage functions when Paritosh’s dad is at home. Kinjal takes a stand to keep the esteem of her husband and in-laws. She refuses Rakhi’s help. This makes Anupama happy. Anupama sees her own shadow in Kinjal. She goes for the job interview with the same speech to deliver.

She tells that she has a responsibility of her entire family and also her own self-esteem. Anupama gets a good news when she gets the job after the principal gets convinced. Anupama tells that she will not get late this time and not disappoint her again. The principal gets convinced just because of Devika. She knows Anupama is talented and deserves a second chance. She asks Anupama not to miss the last chance, else the doors of employment at her school will be closed. Anupama gets the job and wants to share the good news with the family.

The news reaches Vanraj, who isn’t happy with Anupama’s success. He was never happy to see her independent. Vanraj gets his focus on his company merger. His relationship with Kavya also gets affected. She tells him that he has to pay the losses for the contracts they missed. She tells that the new company has posed many rules, if he doesn’t pay the losses, then he will be fired from the job. Vanraj can’t believe it.

He was expecting to perform well and get profits, but instead got to bear the losses. Things turn around for Anupama when she gets the staff identity card. Vanraj realizes that Anupama is taking small steps and progressing while the life is pulling him back. Will Vanraj realize the worth of the family and Anupama’s stand in his life? What do you think, what Anupama will do now? Comment below and keep reading.

Update in detail: Kavya wants to apply for a loan to secure the job and also buy a house for themselves. She tells Vanraj that he has to arrange the money if she falls short. Rakhi tells Anupama that very soon Kinjal will get against Anupama. Anupama doesn’t care and leaves for the school with Samar. Vanraj feels burdened by the new duties. Kavya tells him that she will return the money to him when she earns. Vanraj tells that he has many responsibilities already. She tells that he has to do this for their future. He feels stressed. She wants an answer.

He tells that he has to send money to his family for expenses, he can’t ask Kinjal to take money from Rakhi. He can’t take up Kavya’s useless expenses. She argues that Anupama is always with them. She suspects that he wants to keep his marriage with Anupama. He tells that he can’t invest in any property. He wants her to better divorce Anirudh first. Samar encourages Anupama since she can turn impossible into possible. He wants her to go for it. She doesn’t want to have fears on her mind. She knows that fear will just pull her back.

She collides with the principal and apologizes. Leela comments on the food brought by Rakhi. She asks Kinjal not to eat anything brought by Rakhi. She eats the food and likes it. Paritosh and Kinjal like Leela. Leela feels Anupama would be getting scolded at the hospital. Anupama really gets lectured by the principal, who was also an under-valued housewife. She wanted a fair chance. Principal tells she has called her for Devika’s sake. She asks Anupama if she deserves a second chance, if she will be able to work full-time.

Paritosh tells that Leela will get normal with Kinjal very soon. Kinjal has high hopes on Anupama. They don’t get privacy because of Leela. Anupama is questioned if she would have given another chance to herself. Anupama tells that people do change and also their situation. She exclaims that job was her dream before, but now it has become a need. She has no choice now. She tells that the society can’t tolerate a woman working independent and ahead of her husband, she wants to walk alone, managing her responsibilities. She turns the principal emotional by her talks.

She wants the job at any cost. She convinces the principal. Vanraj gets a huge shocker when Kavya breaks the bad news. Anupama tells Samar that she can look for a job at some other place. Kavya tells Vanraj that he has to get new clients and projects to pay for the earlier losses. She explains how his job is threatened. Principal gives the job and the identity card to Anupama. Anupama’s dream comes true. Principal gives her a second chance and tells that its final. Anupama gets a month time to join the job. Anupama shares the remarkable news with Samar. He congratulates her. Vanraj is frustrated with his boss’ mean behavior. Kavya sympathizes with Vanraj.

Reviewed Rating for this particular episode Anupama 22nd December 2020 Written Update Vanraj on verge:4/5 This rating is solely based on the opinion of the writer. You may post your own take on the show in the comment section below.