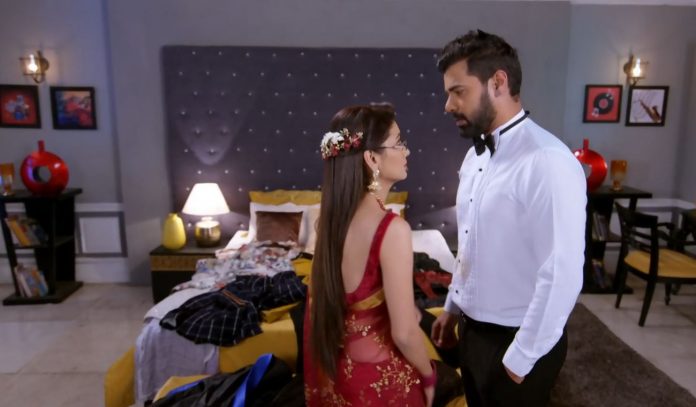 Kumkum Bhagya 24 December 2020 Written Update Pragya killing silence Pragya thinks she has done wrong to get angry on Abhi. Abhi stops her to know her real feelings. He tells that she is just pretending to be happy. He wants to know if she doesn’t want the marriage to happen, what does her heart want. He asks her to admit that she doesn’t want to lose him. Pragya doesn’t express his real emotions. She tells that she doesn’t care for his engagement. She presents a fake smile. Abhi and Pragya break into tears. He knows that she isn’t happy within. Pragya proves him wrong, that she is really happy to get free from their marriage.

Abhi and Pragya ask Meera to wear the necklace. Pragya appears happy that she doesn’t care about Abhi’s engagement. She behaves nicely with Meera. Abhi taunts Pragya that she didn’t value him and his love. He tells Meera that some people don’t value things, but Meera values everything. He tells that Meera is special to him. He tells that there should be special things made for Meera, she is going to become his wife now, she is lucky enough. Meera feels she is indeed lucky. Abhi’s words hurt Pragya.

Meera is stuck between their arguments. Abhi is equally hurt by Pragya’s non-acknowledgment of their love. He wants Pragya to say it once, that she loves him and can’t live without him. Pragya stays alienated as if she has no feelings for Abhi. She deals with her inner conflicts. He wants to stop the engagement on Pragya’s word. He so wishes that she ends her killing silence and speaks up once.

She finds him arrogant and wants him to end his ego first. Also, he wants things to get better between Prachi and Rhea but the fate takes an ugly turn. Rhea gets a huge shock when she finds Prachi close to Ranbir. She threatens to kill Prachi. She misunderstands the situation. She yells at Prachi for touching Ranbir while he is conscious. Aryan and Shahana support Prachi. Rhea and Prachi get into a fight for Ranbir. Why did Ranbir fall unconscious? Keep reading for a detailed update coming shortly.

Ranbir stays away from Prachi. She wants to talk to him once. Shahana asks her to flirt with Ranbir to keep him attracted. Prachi goes to compliment Ranbir. He wants Prachi to hate him and step back from their relationship. He behaves weird to confuse Prachi. He feels sorry to hurt her heart. She tells that she didn’t like his behavior. He is much shocked to see her winking and trying to flirt. He tells Prachi that she is simple, she can’t become trendy like others. Prachi cries to receive his scolding. She goes away.

She gets the expensive necklace. She doesn’t want to wear it. She tells that she didn’t choose that necklace. Tony and his gang are on the way to the jail. They fake a fight and then take over the constable’s fun. They get the police at the gun point and set themselves free from the handcuffs. Tony gets caught by the police. Guru makes an escape with his fellow mate. The robbers plan to take revenge on Abhi and his family. Ranbir tells Aryan that he has no courage to tell the truth to Prachi.

Aryan asks him not to go mad and hurt Prachi. Ranbir tells that he has got over drunk just to lose senses and get courage to break Prachi’s heart. He feels hurt that he has hurt Prachi. He tells that he wanted Prachi to feel jealous for him, she wanted his attention, but he scolded her. He tells that Prachi wanted to change herself for his love, she is coming close to him, but he is going away from her. He feels his fate is really bad. Aryan shares his pain. Prachi wants to talk to Ranbir. She calms down Shahana.

Mitali feels Shahana is after Aryan. She spies to them. She doesn’t think Aaliya will accept Shahana as her Bahu. Rhea looks for Ranbir. She asks Aryan about him. Aryan lies to her that he doesn’t know about Ranbir. He asks Shahana to be happy that Rhea left. Mitali overhears Aryan and Shahana’s love talks. She misunderstands them when they talk about Ranbir and Prachi’s love. Constable informs Saaho that Tony is caught, but Guru and Sailesh have run away. Saaho asks him to find the robbers before they create any havoc. The robbers fool a man to get a car for their transport. The man begs for his life.

He hands over his car and phone to the robbers. They spare his life. They try to call Goga and tell him that they are back on their mission to rob the costly necklace from Abhi’s house. Goga is the disguised waiter. He tells them that he is also in Abhi’s house, Meera has the necklace, they can have it from Meera easily. Goga happens to help Baljeet and gets her blessings. He hopes that he succeeds in getting the necklace.

Prachi confronts Ranbir for his drinking. Ranbir doesn’t want her to make it an issue. Prachi doesn’t want to talk to him. He tells that he loves her, she should scold him when he misbehaves. He tells her that she is the world’s best girl, she shouldn’t change herself. His fake hatred ends. He speaks out his real feelings to her. He pours his heart out. Prachi gets happy that he isn’t angry on her. They get back together. They shed tears after having an emotional union. He apologizes to her. She also makes an apology by blaming herself. Rhea finds them together and creates a scene.

Reviewed Rating for this particular episode Kumkum Bhagya 24 December 2020 Written Update Pragya killing silence:3/5 This rating is solely based on the opinion of the writer. You may post your own take on the show in the comment section below.