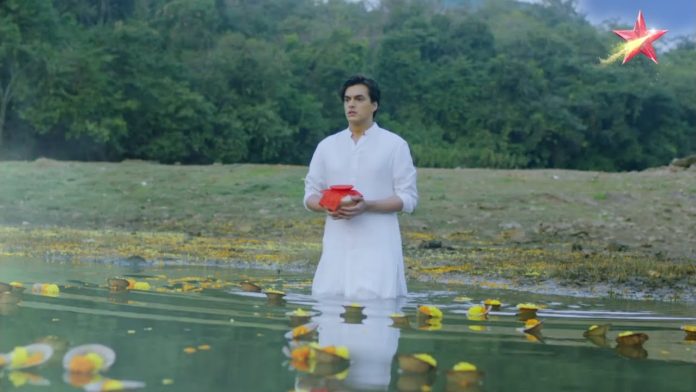 StarPlus YRKKH Naira to die Anupama Top 5 Trending promo Yeh Rishta Kya Kehlata Hai Written Update Naira to die in the coming track. Kartik regrets on Naira’s death. Naira leaves him forever and goes to the heavens. Kartik cries that she didn’t teach him on living without her. He tells that she had taught him to keep the relations united and not hurt anyone’s heart. He knows that they will always be together even if they are physically away. He wants to know who will teach him to live alone. Naira has left him forever. Kartik gets separated from his love Naira. What happens that this twist comes in Kartik’s life? What do you think of this huge twist coming in the show? Comment below.

Reviewed Rating for this particular episode StarPlus YRKKH Naira to die:2/5 Looped This rating is solely based on the opinion of the writer. You may post your own take on the show in the comment section below.

Barrister Babu:
Munshi plays a big game to mislead the Roy Choudhary family that Binoy’s wife, Anirudh’s mother Shubra is back. He threatens a little girl and makes her perform the drama that she is Shubra’s reincarnated avatar. The family tends to not believe the girl even when she follows Munshi’s instructions to convince them that she is Shubra. Trilochan tells that Shubra was a diamond and none can match her level. He adds that he doesn’t believe the girl. The girl tries to trick them. Munshi forgets the favors by Trilochan.

He just remembers Anirudh’s move to take away Saurabh’s dead body and perform the last rites without letting the family mourn for him. Munshi wants Anirudh to pay for his mistake. Anirudh tells Bondita that he still longs to meet his mother. He can’t believe that his mum has taken a rebirth and came back to his life. He doesn’t know that Munshi is the person who has conspired against him. Munshi wants to kill Anirudh and snatch the last rites rights from Roy Choudhary.

Anirudh tells Trilochan that they can’t believe anyone like that and get home. Trilochan is partly convinced. The girl targets Bondita to convince that she is Shubra. Bondita falls in Munshi’s trap as well and takes Shubra home. Will Bondita and Anirudh get to know Munshi’s evil plans?

Choti Sardarni:
Aditi continues to trouble Sarabjeet and Meher. She wants to break their new house. She gets a bulldozer to dismantle their house. Meher can’t let Aditi make her children lose the roof once again. She faces Aditi’s hatred. Meher asks Aditi not to take their goodness as their weakness. Sarabjeet tells that he will not stay quiet now, since its about Meher and his children. Sarabjeet and Meher get together to fight the evil Aditi. Sarabjeet tells that he had sacrificed his entire life, his family, his property and his surname just for the sake of Aditi’s happiness, since he wanted to do justice with her, but this time she is wrong and he will not tolerate any injustice. He strongly opposes Aditi and shows his rage. Aditi wants to ruin them down. Will Aditi succeed?

Imlie:
Imlie isn’t aware of her relation with her sister. She cries to see her husband getting married again. She feels her life is entering the phase of darkness. She can’t give up on Aditya, but is helpless. Aditya doesn’t want to keep his marriage with Imlie. He wants his love at any cost. Imlie hides her tears from him.

Anupama:
Anupama doesn’t want Kavya’s interference in the house. Kavya comes to create a scene in Paritosh and Kinjal’s house. Anupama and Vanraj rebuke Kavya for interfering in their family function. Kavya tells that its her right to attend Paritosh’s marriage. Anupama asks Kavya to just leave. Kavya refuses to her. Anupama tells that Kavya has already created a lots of drama in her marriage, but she will not let her spoil things for Paritosh. She ousts Kavya from the house. Kavya calls Anupama a shameless woman, who always creates a drama around her marriage. Anupama angrily slaps Kavya. She can’t tolerate more of the humiliation from Kavya. Even Vanraj feels Anupama did the right thing to answer Kavya this time, because he also feels Kavya is wrong.

Reviewed Rating for this particular episode Anupama News:5/5 This rating is solely based on the opinion of the writer. You may post your own take on the show in the comment section below.