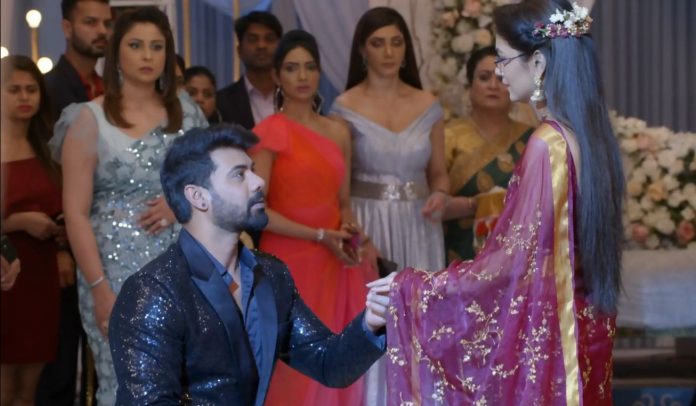 Kumkum Bhagya 28th December 2020 Written Update Abhi loves Pragya Shahana pacifies a broken Prachi. Prachi tells that Pragya will think wrong when she learns that Ranbir had befooled her. She feels she is at fault to trust Ranbir. She wants to confront Ranbir for pretending to love her. She hates herself on knowing that he loves Rhea. She tells that she would have not come between Ranbir and Rhea if she knew it. She can’t believe that he has given her place to Rhea. She breaks down.

Shahana asks Prachi not to shatter and stop crying for Pragya’s sake. Shahana is angry on Rhea for being so bitter. Abhi asks Pragya if she is happy. Pragya tells that she is happy. He knows she is lying. He tells that he loves to clear his misunderstandings. He adds that she promised to dance in his engagement. She tells that she will really dance for his happiness. She announces a dance. She performs to express her fake happiness. Abhi knows the pain hidden in her eyes. Abhi dances with Pragya.

They get emotional on the dance floor. Baljeet wishes that they stay together always. Aaliya dislikes their pairing. Meera feels hurt. Abhi asks Pragya if she will be happy by his marriage with Meera. She asks him the same thing. She leaves it on his wish. Aaliya asks Abhi to come for his engagement with Meera. Meera awaits him. On the other hand, Ranbir gets to senses. Aryan doesn’t want to tell him anything. Shahana barges into Aryan’s room to scold Ranbir. She tells that Ranbir has to know the matter. Aryan stops her.

Ranbir asks Shahana to come to the point. She tells him that he is lucky that Prachi chose him, she is good-hearted, he has disrespected her love. She tells that Rhea has told bad things to Prachi. He wants to know what did Rhea tell Prachi. Shahana tells that Rhea has questioned Prachi’s character. She asks him how can he leave Prachi for Rhea’s sake. Pragya cries her sorrow but hides from Abhi. Abhi wishes Pragya to stop the engagement. Tai ji hands over the engagement ring to Abhi. Doctor comes for Pallavi’s check up.

Pallavi wants to attend the party and go. Pragya and Abhi shed tears within in their hearts. They yearn for each other. Pragya witnesses his engagement. Sarita wants them to break their silence and just speak out their love for each other. Meera sees if Pragya is affected and would react. Pragya finally takes a step to reach Abhi and stop his engagement. She tests his love by asking him to accept her. She gives her hand to Abhi. Abhi and Pragya get engaged happily, forgetting Meera who stands beside and cries. Abhi and Pragya emotionally unite in Pragya’s dream sequence. The ring falls near Pragya’s feet.

Abhi asks Pragya if she can’t see the engagement. He asks her to admit that she still has the power to stop the engagement. He wants her to leave his obstinacy and express that she still cares. He tells that he will never marry anyone, he should stop this situation. He tells that he will not get engaged if she wants. Pragya hugs him. This also turns to be her dream. Abhi asks Pragya to pass the ring. They both stay upset. Ranbir tells Shahana that Rhea said wrong. Shahana wants to know the truth. She tells that Rhea can’t lie everything, Ranbir would be at fault as well. She questions him why did he cheat Prachi.

Ranbir wants a chance to clarify. She tells that he had convinced Prachi of love. She regrets to help him. She tells that Prachi has shattered that Ranbir has moved on with Rhea. Ranbir knows Prachi’s pain. Shahana tells that Ranbir is the worst man in Prachi’s life. She wants to beat up Ranbir and punish him for his mistake. Ranbir wants to talk to Prachi. Aryan wants Shahana to know Ranbir’s side of story. She doesn’t believe him. Aryan defends Ranbir.

Shahana tells that Rhea has proved Pallavi’s story wrong. Aryan tells that Ranbir has left Prachi for Pallavi’s sake, anyone would do that for mother’s sake, even Prachi would make such a sacrifice for Pragya’s sake. He answers her. Ranbir rushes to meet Prachi. Abhi’s engagement delays. He so wishes that Pragya confesses her feelings. Their longing becomes a longing for everyone witnessing their moment. Pragya drops the ring after reaching Abhi. Abhi goes on his knees to pick the ring. Pragya forwards her hand to him with dreams of their engagement, seen twice in the short span. Will they finally unite? What will happen with Ranbir and Prachi? Which love story do you know, Abhi-Pragya or Ranbir-Prachi? Comment your views below and just keep reading.

Reviewed Rating for this particular episode Kumkum Bhagya 28th December 2020 Written Update Abhigya love:4/5 This rating is solely based on the opinion of the writer. You may post your own take on the show in the comment section below.