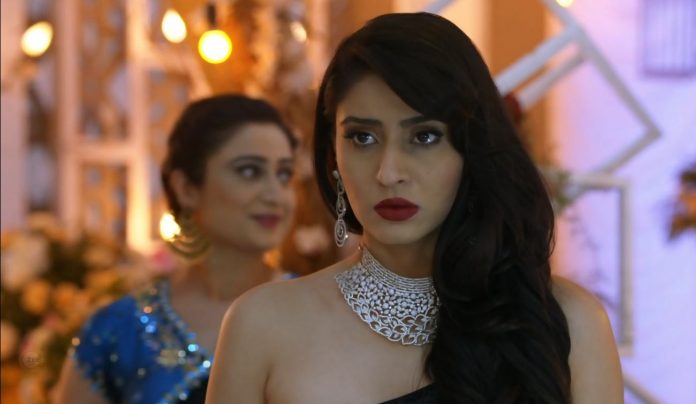 Kumkum Bhagya 29th December 2020 Written Update Danger twist Pragya and Abhi’s engagement moment shocks Meera. Moreover, Goga tries to spike her drink and get the necklace from her. Meera gets dizzy. Her condition stops Abhi from putting the ring on Pragya’s finger. Abhi worries for Meera. The robber poses as a doctor and tries to get away with Meera to snatch the necklace. Ranbir tries to talk to Prachi. Prachi is hurt by Rhea’s words.

She doesn’t listen to Ranbir’s clarification. The robber tells the family that he will give an injection to Meera and help her regain consciousness. He asks the family to leave Meera alone for some time. Rhea wants to be with Meera. Abhi tells that they should let them rest for some time. Baljeet tells that Abhi and Pragya are made for each other. Raj also feels that Abhi and Pragya have a strong destiny. Doctor tells Pallavi that he could have done her checkup at the hospital, instead coming home. Pallavi asks him to check Dida’s health.

She tries to cover up and takes the doctor away from Ranbir’s sight. Abhi finds Pragya tensed. Pragya senses something is wrong. Aaliya asks Pragya not to interfere between the family. Pragya realizes that the doctor is fake, he is actually the jewellery store robber. She shares her suspicion with Abhi. Meera gets conscious. She tells the doctor that she is feeling better, she doesn’t need any injection.

The robber asks her to remove the necklace so that she doesn’t feel claustrophobic. Meera falls into their words and removes the necklace. She suspects them seeing their expression. She makes an excuse to run away. Goga tells that they will rob the entire house after getting the necklace. Ranbir wants to explain Prachi the truth. Prachi runs away from him. She doesn’t want to feel more insulted. She locks herself in a cupboard. She sheds tears that she got cheated when she truly loved Ranbir. Guru calls the goons inside the Mehra mansion.

He wants them to surround the place and get everyone captive. Abhi doesn’t think Pragya is right. Pragya asks him to go and save Meera from the robbers. Meera shouts to the family about the robbers. She throws the necklace to Pragya. Pragya’s life falls in danger. She gets at gun point. Abhi runs to save Pragya. The goons invade the house. Ranbir realizes that Prachi is inside the cupboard. He tells Prachi that he never intended to break her heart.

He tells that Pallavi had fixed Rhea and his alliance by speaking to Abhi. He reveals that he couldn’t see Pallavi facing a fatal situation. She doesn’t want to believe him after facing much humiliation. Pragya runs to save her life and also the necklace. She hides the necklace in a vase. She protects herself as well. She misleads the robbers. Abhi gets caught by the robbers’ gang. He tries to boldly fight, but he finds Pragya caught again.

Goga tells Pragya that he will spare everyone, but not the girl who ruined his plan at the jewellery store. The family gets into action and fights the gang. Abhi gets stressed when he finds Pragya in danger. Rhea looks for Ranbir. She also gets caught. She tries to alert Kohlis about the robbers. Guru catches Prachi to punish her when Rhea runs away. Rhea gets selfish and saves herself. She stops Ranbir from saving Prachi’s life. Ranbir gets raging at Rhea for her selfish behavior. Will the robbers harm Prachi? Keep reading.

Reviewed Rating for this particular episode Kumkum Bhagya 29th December 2020 Written Update Danger twist:3/5 This rating is solely based on the opinion of the writer. You may post your own take on the show in the comment section below.