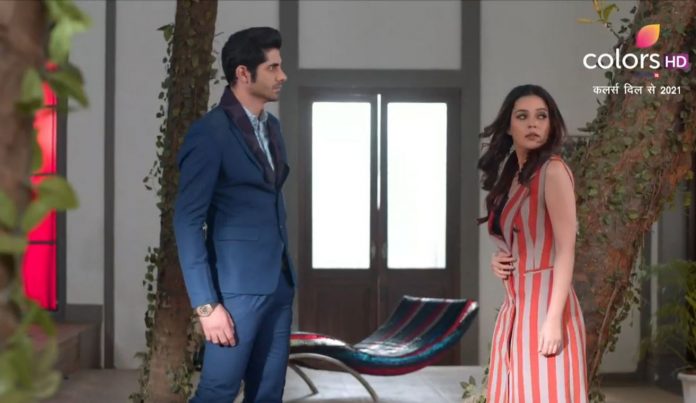 Ishq Mein Marjawan 2 31st December 2020 Written Update Revenge battle begins Ahana gets known to be Vansh’s accomplice. Vansh has got Ahana in her plans to take revenge on Riddhima and Kabir. He got to know that Riddhima entered his life as a spy. He doesn’t want Riddhima to play with his feelings. He thinks Riddhima is still being in his life just for Kabir’s sake. He can’t tolerate the pain given by Riddhima’s cheat. He remembers that Riddhima has never loved him before, and now when she loves him, he doesn’t have faith on her love.

Vansh and Riddhima’s romantic union also doesn’t mean anything to him. He hates her. He wants to make her realize the pain of a heartbreak. He plans to take Ahana on his side by promising her something unusual. Ahana wants to become part of Vansh’s life after making Riddhima expelled. Kabir has no idea that Ahana is actually planted in the house by Vansh. Vansh wants to create troubles for Ahana so that Kabir takes a stand for her.

He wants Riddhima to assume Kabir and Ahana as a team. Kabir thinks he has done a big mistake to involve Riddhima in his plans against Vansh, since Riddhima’s loyalty got shifted to Vansh. Vansh doesn’t know that Riddhima’s love is true, she had been protecting his family from Kabir in his absence. He suspects Riddhima. He just wants Riddhima to get the deserved punishment. He tells Ahana that he has much fire in his heart, he will not spare Riddhima, he will punish her and make her cry for her past deeds.

Ahana tells him that she will help him only if he keeps his promise. Vansh is committed to Ahana. He wants her to just trick Kabir and execute their plan. Vansh hides from Riddhima when she arrives at the pool side. Riddhima has blind faith on Vansh. He wants to break her trust and then strike on her mental ability to ruin her down. Riddhima gets happy on seeing a sweet gesture from Vansh. She feels Vansh loves her truly. She feels safe with him. She thinks he can never hurt her. She wonders why did Ahana lies to him.

She tells Vansh about Ahana, who isn’t a right person. Ahana has brainwashed Riddhima to some extent, and left an impression that Vansh can be wrong. Riddhima doesn’t want to bring doubts in her mind. Vansh takes an advantage of her belief. Riddhima complains about Ahana. Vansh doesn’t believe her. He wants Ahana to stay at home and execute his planning. Riddhima tells that she will prove Ahana wrong in front of Vansh. Vansh promises to oust Ahana if Riddhima proves her wrong. He doesn’t think Riddhima can prove anything against Ahana or him.

He gets blind in his revenge fire. Riddhima makes a plan to catch the attacker. She sends the note to the suspicious five members in the family. Kabir gets angered that Riddhima is flying high because of Vansh’s support. He isn’t aware that Vansh is targeting Riddhima and him with the help of Ahana. Riddhima finally gets to catch Ahana red-handed when the latter attacks her. Riddhima wants to expose Ahana’s truth to Vansh and make her out of VR mansion. Will Riddhima succeed? Will she learn Vansh’s move of seeking revenge on her? Will she be able to clear Vansh’s misunderstanding? Keep reading.

Reviewed Rating for this particular episode Ishq Mein Marjawan 2 31st December 2020 Written Update Revenge battle begins:3/5 This rating is solely based on the opinion of the writer. You may post your own take on the show in the comment section below.