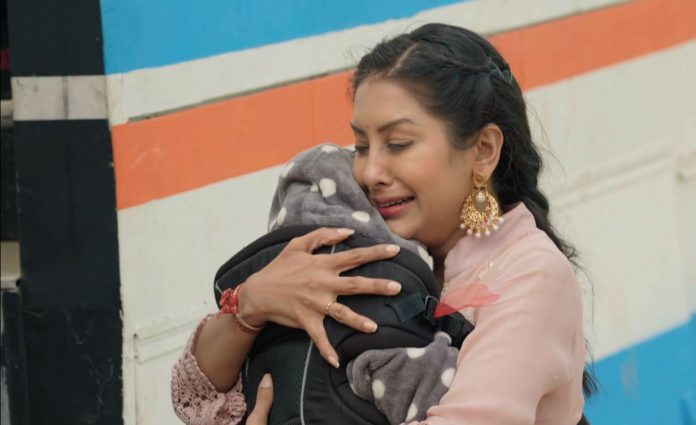 YRKKH Upcoming Gayu avatar Anupama Starplus Top 2 Naira makes a huge sacrifice for her family. While Naira breathes her last and leaves Kartik and Goenka family behind by protecting them during the unexpected bus accident, the coming twist will be Gayu taking up Naira’s place for little Kairav and baby Akshara. Gayu will be seen becoming Yashoda for the kids as a repentance towards Naira. Gayu will be seen mothering Naira’s children. Kartik will be seen getting on estranged terms with the family, as seen before when Naira was assumed dead by Kartik, while she was living a nuclear life in Goa.

Kartik and Naira’s separation twist will be having high peak drama. The show will soon bring up Naira in a totally different avatar and a new identity. Will Naira have a memory loss and pick up a new identity to meet Kartik? Will destiny bring them together again? Comment below about the show’s coming high points. Keep reading.

Today’s update Yeh Rishta Kya Kehlata Hai 4th January 2021 Naira is badly in trouble, but seeing Kairav in trouble, she tries to act strong. Lav and Kush try to leave the house from the back side to get help for the family. They try to get some boulders and stop the bus from slipping. Kairav falls weak. He doesn’t want to leave Naira behind and go away. Naira speaks to convince Kairav until Kartik helps others. The driver warns them that the bus is slipping down. Kartik and Naira protect Kairav. The family members realize how Kartik, Naira and Kairav helped them in difficulties.

They run to help Kairav and save his life. Naira pretends strong, despite the fact that she may die any moment. Kartik evacuates the bus by sending the members out one by one. Lav and Kush try to get some help from locals, but fail. Kirti suggests them to put more boulders. She finds a rope in the bus. She wants them to tie the bus to some tree or fixed object. Naksh faces a fatal risk when he falls out of the bus into the cliff side, but gets rescued by Manish and Kartik in time. The family fears that they will lose Naksh.

They decide to send the other members from the back side when the bus is going to fall down any time. Surekha loses hope that she can get saved. She gets a panic attack. Surekha asks Akhilesh to leave her and go. Akhilesh secures her first. He can’t see her dying. Kartik asks Naira if she feels that they will get saved. Naira tells him that nothing will go wrong, until they are together. They have an emotional moment. Manish doesn’t want Suwarna to force him to push her out of the bus. Suwarna doesn’t want to leave her children behind.

Kartik promises to secure others. Akhilesh is also adamant to not leave Manish behind. The brothers share a sorrowful tensed moment. He counts on Kartik and Naira. Naira asks Kartik not to listen to Kairav further and delay his security. Kairav wants Naira to promise him that she will come soon. Naira promises Kairav. Manish and Naksh find themselves helpless that they aren’t able to save Kartik and Naira even when they are so close and can see the approaching danger. Naira demands Manish and Naksh to go the family and not be adamant. Naksh doesn’t want to leave his sister to die. Kartik promises to secure Naira. Kairav makes an earnest prayer for his mother.

Leela blames Anupama for Vanraj’s condition. She tells that she already sensed her son is going to land in huge trouble. The police gets Vanraj out of the car by much difficulty. Anupama is worried to find her husband fighting death. She is relieved to know that he is alive. Her hopes her back. He is not just her husband, but also her children’s father. She wants him to survive for the sake of family. She gets Vanraj’s phone there. She doesn’t answer Kavya’s calls.

Sanjay asks Samar to get Anupama with him. Anupama tells the police that she is Vanraj’s wife. She forgets their issues to be with him. Leela blames Kavya as well. She realizes that he is in critical state. She wants to go to him and see him once. Samar melts his heart for Vanraj, after seeing his critical state. He cries for his dad. He can’t see his parents in pain. He knows Vanraj is injured, but Anupama is also in pain. Kavya calls Vanraj repeatedly.

Anupama answers her call and informs her about Vanraj’s accident. Kavya is much moved to see his state. She regrets for their fight. Vanraj gets a life thanks to Anupama’s prayers. Doctor advises a minor surgery to avoid complications in future. Anupama cries a lot for Vanraj. She regrets to get harsh on him. Leela and Hasmukh turn up at the hospital to see their son. Sanjay tells them that Vanraj got saved luckily. Anupama tells Leela that Vanraj has no internal injuries. Leela accuses her for hurting Vanraj’s sentiments and putting him in utmost pressure, which led to the accident.

She feels Anupama and Kavya are the two worse women in his life. Kavya lands at the hospital. She repents a lot after learning about Vanraj’s condition. She requests them to let her see Vanraj. She hugs Anupama to share her pain. Kavya’s reaction gets unexpected. Leela dislikes Kavya. She reprimands Kavya for coming to see Vanraj again. She tells that Kavya has no right on Vanraj. She feels Vanraj’s life is cursed because of them. Anupama and Kavya feel equal guilt with Leela’s accusation. Vanraj’s condition suddenly gets critical again.

Leela accuses Kavya for not letting Vanraj attend Paritosh’s wedding. She knows that Kavya had fought with him and depressed him which is the reason for his accident. She asks Kavya to spare Vanraj’s life. She tells that Kavya is the cause of Vanraj’s condition, she should leave from the hospital. Kavya doesn’t want to leave. She seeks help from Anupama. Anupama lets Kavya stay, since Kavya is Vanraj’s love. She tells that Vanraj would like to meet Kavya once he gets conscious. She behaves strong-minded, but is emotionally broken.

Samar asks Anupama not to forgive Kavya. Anupama knows that Kavya is really regretting her actions. Kavya apologizes to Vanraj. Vanraj’s reports bring a matter of tension. The doctor reveals that Vanraj is critical and needs to undergo a surgery right away. Kavya wants to donate blood to Vanraj. She tells Anupama that she is perfectly fine for the blood donation. Leela taunts Anupama for not giving blood to Vanraj. Anupama doesn’t think blood donor matters when its about Vanraj’s life. She is ready to bear the taunts.