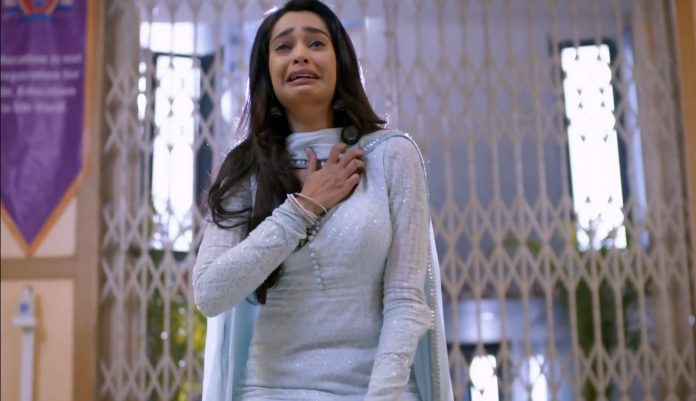 Kumkum Bhagya 5th January 2021 Written Update Prachi breaks down Abhi expresses his feelings to a doll which resembles Pragya. He tells that she would be enjoying by acting ignorant of his feelings. He wants her to accept that he loves her. He wants to admit his feelings to her. He spends time with Pragya’s memories. He feels even she is angry and stubborn like him. Rhea wants to talk to him about his marriage with Pragya. Aaliya stops her from running to Abhi. She tells that Abhi will give importance to Prachi once he marries Pragya.

Rhea tells that she knows this will happen, its all destined, she doesn’t care if Pragya comes home and stays with Abhi, she doesn’t hate Pragya so much, since its all about Ranbir’s love. She is mad to get Ranbir’s love by snatching it from Prachi. Aaliya fails to stop Rhea from reaching Abhi. Abhi calls up Pragya for a meeting. She vents anger on him for little things. She tells him that she is going to an important wedding function. He tells her that though he fight a lot, they always have the same plans in life. He is also inviting her in the function.

Purab meets him and finds him frustrated. Abhi asks him to confront Pragya. Purab knows that Abhi is doing this for Rhea’s sake. Rhea meets Abhi to test his love for her. She tells him that she wants him to do something. Abhi tells her that he is marrying Meera for her sake. Rhea asks him to refuse for the marriage again on her saying. Abhi is surprised. Aaliya finds Rhea failing her plans. Meanwhile, Prachi and Ranbir meet at the college. She is much angered at him. She tells him that she got saved from him. She wants to break up with him. She breaks his heart.

He tells that Pragya will think strange things that Meera is cancelling the marriage. Purab asks Abhi not to get into his ego right now. He wants Abhi to just cancel the marriage when Rhea has herself backed out from the madness. Abhi tells that Rhea won’t decide anything, he is going to marry Meera. Aaliya is glad that Abhi got stubborn. Rhea threatens to run away from the house. Abhi threatens to show his rage. He tells her that he will not listen to her this time, he will have his marriage functions, he can’t back out from the marriage any time Rhea wants.

Aaliya asks Rhea to understand what Abhi wants. Rhea tells her that its not about Abhi and Pragya, but Ranbir. Aaliya wants to tell her that matter is just about Abhi and Pragya. She doesn’t want to use Rhea further in her plans. Aryan tells Shahana that Prachi had called Ranbir for a meeting and then behaved really weird. Shahana tells him that Prachi maybe taking revenge after their patch up. Aryan tells that Prachi wants to break up with Ranbir. She asks him to relax and wait till Prachi settles scores.

He doesn’t think Prachi is that kind of girl to take revenge. Shahana tells that maybe both Ranbir and Prachi are fooling him by this drama. Ranbir stops Prachi for an answer. She tells that she will have a problem if she marries him, his family will never give him any property or money if he goes against them. She doesn’t want to live a poor life after her marriage. She tells that love doesn’t run without money.

Ranbir asks her why did she turn into a gold-digger suddenly. Prachi tells him that she was pretending to a simple girl just to marry him, but she is showing him the truth knowing that Pallavi won’t accept her. She doesn’t want to get just Ranbir’s love. Ranbir doesn’t understand what she means. She tells that he is born with a silver spoon, he would not know about her struggles. He tells her that he will earn money and fill her life with happiness. He doesn’t want her to talk of parting ways. He tells her that its important that they stay together.

He tells that he ignored everything when Rhea told her. He tells Prachi that she will live without her love. He doesn’t want to forgive her. He tells her that she will regret on their breakup. He feels she is a cheap minded girl. Ranbir feels heartbroken. Prachi keeps her promise by breaking Ranbir’s heart. She sacrifices her love for completing Abhi and Pragya’s love story. Prachi also breaks down after Ranbir leaves. Did Prachi take the right step to fall in Rhea’s plans and break up with Ranbir? What do you think about Abhi’s obstinate madness? Keep reading and comment your view below.

Reviewed Rating for this particular episode Kumkum Bhagya 5th January 2021 Written Update Prachi breaks down:2/5 This rating is solely based on the opinion of the writer. You may post your own take on the show in the comment section below.