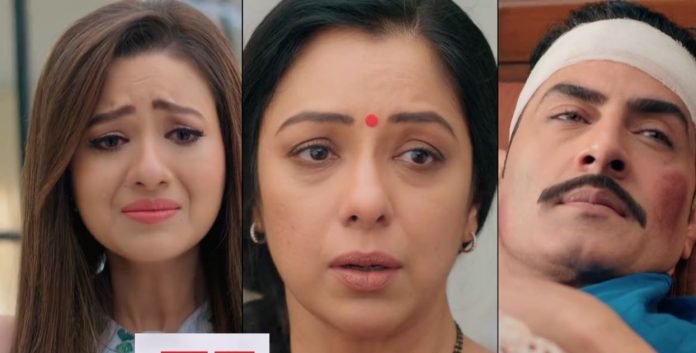 Anupama Written Update Upcoming Vanraj shocks Kavya Anupama takes care of Vanraj, since he is still the father of her children. She apologizes to him when she feels guilty of his condition. Vanraj feels touched by her gesture when he finds her looking after him. Kavya wants to see Vanraj. She passes the night at home with much difficulty, being concerned for him. She rushes to the hospital in the morning to see him. She gets obstructed by the medical staff, who wants her to leave the premises.

Vanraj holds his memory of the accident. Anupama wants him to take some rest. He wants to know how did Anupama reach him. The family is also stressed for Vanraj. They pray the entire night until they get the good news that Vanraj has gained consciousness. Doctor checks Vanraj. He instructs Anupama about his care. Kavya finally sees Vanraj before getting ousted from the hospital. Vanraj complains of the discomfort.

Kavya barges into the ward to speak to the doctor. Doctor permits Vanraj to go home. Kavya wants to take Vanraj to her home. She is glad that Vanraj is okay. She shows her rights on Vanraj, which seems a burden to him. Kavya tells that Leela didn’t let her stay back with him. Leela and Hasmukh meet their son at the hospital. Vanraj is also emotional to see his children. Doctor wants the family to take utmost care of Vanraj’s delicate state. The family assures that they will take care of Vanraj. Leela and Hasmukh feel they should forgive Vanraj now.

Hasmukh doesn’t want his curse to affect his son. He shows his care for Vanraj. Vanraj feels happy when Samar also tends towards him. Samar wishes him a quick recovery. He tells Vanraj that he loves him, he is glad to see him between them. Vanraj was missing his family’s love since long. Kavya compels Vanraj to come along with her. Leela and Kavya’s argument gives him tension. Leela wants to take Vanraj home. She tells Kavya that she isn’t suitable to take care of Vanraj. She wants to give the responsibility to Anupama.

She knows Anupama is the best in handling relations. Kavya doesn’t want Leela to blame her. She blames Anupama. Leela defends Anupama. She feels Kavya will break all the relationships. Vanraj requests Leela to put an end to the argument. Leela asks him to take the decision. She wants him to decide if he wants to go back to Kavya. Vanraj remembers his break up with Kavya. He doesn’t want to go back to her. He tells that he will go to his family, his home where he can find joy and peace. His heart and soul reside in his home.

Anupama is surprised by his decision. Its a shocker for Kavya. His decision leaves her totally shocked. Kavya sheds tears on losing Vanraj. Anupama takes Kavya’s consent as well. Kavya doesn’t have any objection when Vanraj has made his mind. The family welcomes Vanraj home. They want to make a new start.

Anupama stays away from Vanraj, while Leela tries hard to mend all the relationships on getting Vanraj under the same roof. Anupama finds hard to forget the bitter past, the harsh accusations from Vanraj’s side that broke their relation. Hasmukh knows that nobody thought for Anupama’s emotions. He apologizes to her.

Leela expects a lot from Anupama. Anupama tells Leela that they need money to take care of Vanraj as well. Anupama clears to Leela that she can’t fulfill her every expectation. She refuses to shut down her dance classes, which is her only medium to earn and run the house. Vanraj refuses to return to Kavya. He feels happy to be back in his own house, where he can gather the family’s lost love.

Reviewed Rating for this particular episode Anupama Written Update Upcoming Vanraj shocks Kavya:5/5 This rating is solely based on the opinion of the writer. You may post your own take on the show in the comment section below.