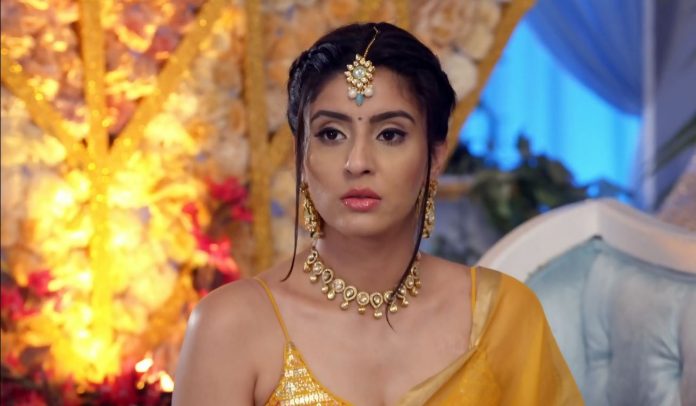 Kumkum Bhagya 11th January 2021 Written Update Meera is shocked Abhi gives an opportunity to Pragya to express her feelings. He asks her to apply haldi to him and makes it difficulty for her. Pragya goes to apply haldi to him in a way that she falls over him and gets the same haldi applied to herself as well. They have a special haldi moment, noticed by one and all. Their well wishers get happy, while the rest of the people get jealous. Abhi asks Aaliya to apply the haldi to Meera. He tells that he has got enough haldi.

He wants to meet Pragya and know if he still affects her. Abhi goes after Pragya. Raj meets Digvijay, who is the new trouble in Abhi’s life. Meanwhile, Ranbir confronts Prachi for being afraid of the world and losing their lives. He tells Prachi that she always valued love more than money, she has taught him the meaning of love. He tells that he got to understand the meaning of love because of her. He wants her to confess the truth. He tells her that he loves her the most, she knows it well. He wants her to come to him and confess love.

He isn’t a guy to get excuses to touch her. He tells her that his love will touch her soul, she will always be happy with him, his love will end her every reason for their separation. He wants Prachi not to act rigid.

She wants Rhea to fulfill her promise without any delay. Rhea asks Ranbir not to get mad after Prachi. He warns her against getting between Prachi and his love story. Later, Abhi and Pragya have a confrontation. She asks him to return for his haldi. He tells her that he had come to apply the haldi to him. He applies the haldi to her face. He asks her if she is scared to get close to her. Pragya asks him not to hold her close and hurt Meera’s sentiments. Abhi tells that he doesn’t care for anyone. Meera gets to see them together.

Abhi and Pragya have a fearless romance without caring about Meera or the world. He tells Pragya that he is loving to colour her with his haldi and love. He reminds her about their past. She has remained the colour of his life. He doesn’t want her to fade down. He tells that she would be upset that he is going to marry someone else.

He doesn’t want her to stay silent. She asks him why is he reminding the past. He tells that their past will always keep them together in present. He tells that he didn’t find her beautiful. She gets angry at him. He tells her that he finds her so beautiful right now, that he gets attracted towards her.

He wants her to think how did he fall in love for her if he didn’t find her pretty. He tells that he had fallen in love with her heart, then he found her the best girl in the world, but he is the bestest. He wants her to remember that she will be at bigger loss if they get away, she will lose him forever. He feels that it will be too late till she realizes this. She doesn’t want him to hurt Meera. He asks Pragya if she is scared of Meera. He tells her that she is his wife already. He knows that she is scared of their closeness, since her lies will be caught, her real emotions will come out. She makes Abhi away before Meera reaches them. Keep reading.

Reviewed Rating for this particular episode Kumkum Bhagya 11th January 2021 Written Update Shocker for Meera:3/5 This rating is solely based on the opinion of the writer. You may post your own take on the show in the comment section below.