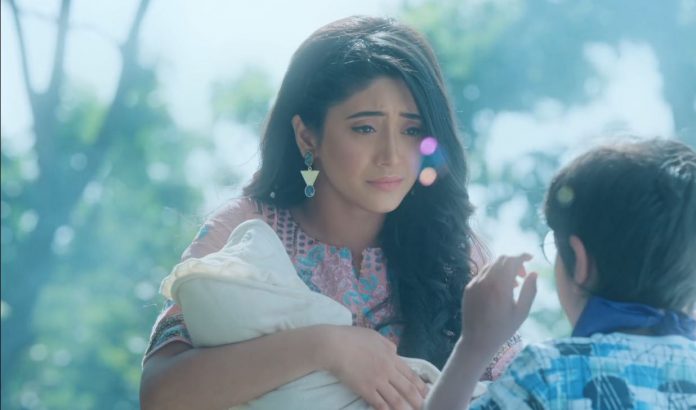 YRKKH Upcoming Naira exits 8th January 2021 Confirmed news The entire family is in grief over Naira’s loss. They still have a hope that she will be alive, getting saved somehow by destiny that connects her with Kartik. They believe that their Naira will come back for their sake. They want Kartik to find Naira and bring her home safely, while the kids are waiting anxiously. The family wishes Kartik and Naira’s union.

Kartik and Naira’s eternal love is something known and acknowledged by the family. The family knows that Kartik can never imagine life without Naira, he will also lose out his life if anything happens to Naira. Bhabhimaa experiences a traumatic shock post the accident. She believes that Kartik had rescued Naira. She forgets that Naira has slipped down the cliff edge and fell down. The Goenkas face another tension with Bhabhimaa’s weak memory. Bhabhimaa wants to see Naira once. Kairav and Akshara’s state gets worse because of Naira’s absence.

Kairav prays for Naira’s return. He hopes that Kartik will bring her back at any cost, he will never return home alone. He pins his hopes on Kartik. Kartik curses himself. He feels he should go to Naira and bring her back, she is waiting for him, she is hurt and not able to move herself to come in the sight of the rescue team. He thinks if he goes down the cliff, then he will be able to find her. He wants to get punished for not saving her when he could have held her hand tightly. He had failed to hold her hand and missed to save her. He can’t meet the eyes of his children.

Manish and Kartik get into an argument with the rescue team officers, who apologize to them on failing to find Naira. They tell Kartik that they will continue the search in the morning. Kartik feels it will be too late, since Naira may need immediate medical attention. Kartik doesn’t get permitted to go down the cliff, even when he tries hard to run. Manish understands his pain. He permits the officer to drug Kartik and faint him down so that he can take his son home. Kartik pleads that he can’t meet Kairav’s eyes when Kairav questions about Naira.

He gets angry on Manish for not letting him find Naira. Kartik and Naira’s separation track begins when they get distanced from the cliff side. Kartik is taken away by the family. The Goenkas experience a hard sorrowful time. the family learns that Kartik has been forcibly brought home by Manish on failing to find Naira alive. A truth strikes them when the police informs them about the dead body found in the cliff zone, which is possibly of Naira. Kartik doesn’t want to believe it. To what extent will Kartik go to find Naira? Keep reading.

Reviewed Rating for this particular episode YRKKH Upcoming Naira exits 8th January 2021 Confirmed news: 3/5 This rating is solely based on the opinion of the writer. You may post your own take on the show in the comment section below.