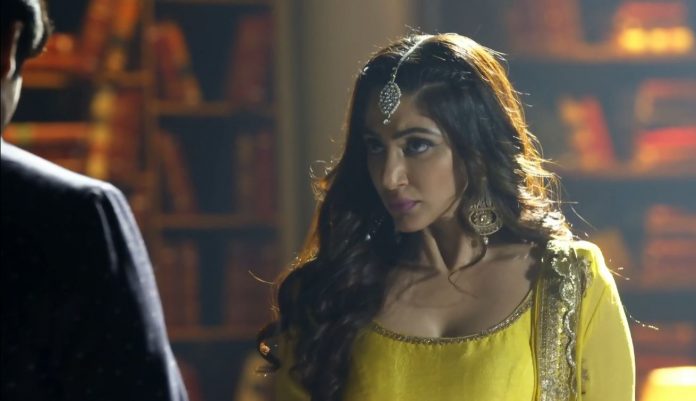 Kumkum Bhagya 12th January 2021 Written Update Digvijay entry Ranbir reprimands Rhea for speaking against Prachi. He doesn’t want her to brainwash Prachi. He tells her that he can expose her truth to the family. He doesn’t want her to force her. He threatens her. He doesn’t want Rhea to come between Prachi and him. She asks about their engagement. He tells her that their engagement is just nonsense, it doesn’t mean anything to him. He breaks Rhea’s heart. Rhea is adamant to get Ranbir. She wants Prachi to stick to her promise. She wants Abhi and Pragya to get married.

Meanwhile, Pragya hides Abhi and herself from Meera. She doesn’t want any misunderstanding. Pragya asks Abhi not to anger her. She doesn’t want to fall in Meera’s eyes. Abhi jokes that they are having an affair. She asks him not to hurt Meera and Rhea. He asks her not to care for others. She finds him changing. He tells that he has become bad since she is leaving him. He tells that he is getting married in two days, she should better forget every issue and come back to him. They have a moment. Mitali finds them secretly meeting.

She wants to know if they are really together. Further, Prachi wants to get over Ranbir and her love story. She is deeply touched by Ranbir’s words. She knows that its difficult for him to get away from him. She doesn’t want to hurt his heart. She shares her concern with Shahana. She wants to see her parents happy and together. She feels her sacrifice is a little thing for them. Ranbir and Aryan spy on them to know the truth.

Ranbir is left with no option than to kidnap Shahana. Aryan is confused by Ranbir’s move. Vikram and Pallavi are confused to see Baljeet’s happiness when she was against Abhi and Meera’s marriage. She tells that she will be hurt if Meera’s marriage breaks. Vikram tells that Pragya was Baljeet’s super bahu before. He knows that Pallavi hates Prachi and Pragya without any reason. Prachi looks for Shahana. She finds Rhea in a bad mood.

Sarita and Baljeet are happy that Abhi and Pragya’s haldi ceremony happened. Purab joins their team. Sarita asks Purab to help them. Purab tells that they are doing a lot to unite Abhi and Pragya. Abhi meets Meera and tells that he will apply the haldi to her to colour her like Pragya. Meera tells that she had allergic reaction on applying haldi. Abhi congratulates her. He tells her that Pragya’s prayer is getting fulfilled. Pragya is hurt by his taunt. Mitali alerts Aaliya about Abhi and Pragya’s marriage possibility.

She tells that they are secretly romancing and they will eventually get married. She asks Aaliya what will she do now. Aaliya tells that she won’t let this happen. She tells that if such a thing happens, then she knows what to do, Raj also knows about it. Mitali gets confused. She is sure that Abhi and Pragya will get married in the mandap. She calls Raj to know about dangerous Digvijay. Moreover, Ranbir confronts Shahana about Prachi’s reason for break up. He knows that Prachi is helpless for some reason. He asks Shahana to help him in solving the problem. Shahana has promised Prachi that she won’t tell anything to Ranbir.

She doesn’t want to tell the reason to Ranbir. Ranbir tells her that he truly loves Prachi, he will cross any limit to get her, no matter what she decides. He apologizes for kidnapping her. Aaliya meets the mysterious Digvijay. She tells him that he needs to use the legal documents against Abhi and Pragya. She guides him. She wants to blackmail Abhi to marry Meera, if he chooses Pragya in the mandap. She thinks Digvijay will be the right trump card to compel Abhi. Ranbir tells that Pragya can never force Prachi to break up with him.

Aryan tells him that Rhea should have not forced Abhi to marry Meera. He feels something went wrong on the Diwali night that changed their lives. Ranbir understands that Rhea has compelled Prachi to sacrifice her love for uniting Abhi and Pragya. He wants to get his answers from Prachi. Abhi and Pragya’s silly fights are further dragged in the haldi function. Pragya congratulates him. She finds her happiness on seeing him happy.

Reviewed Rating for this particular episode Kumkum Bhagya 12th January 2021 Written Update Digvijay entry: 4/5 This rating is solely based on the opinion of the writer. You may post your own take on the show in the comment section below.