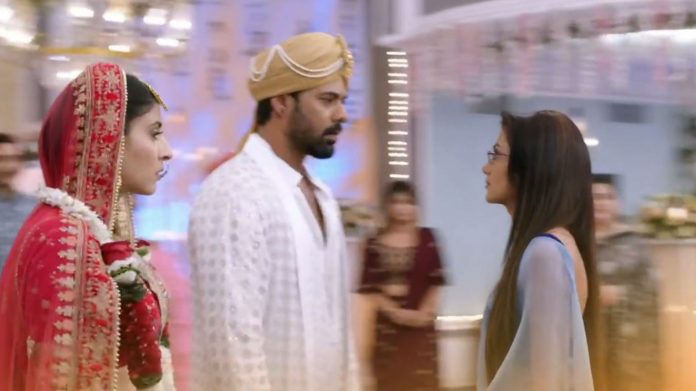 Kumkum Bhagya 14th January 2021 Written Update Pragya stops wedding Meera knows that Abhi and Pragya love each other a lot. She had seen their love. She wants to get Abhi’s love. Rhea meets Meera to request her. Meera tells that Aaliya had called her to her room at night, since she was scared. Rhea knows Aaliya’s conspiracy. She wants Meera to not marry Abhi if she loves her. Meera is shocked to know that Rhea is against the marriage. Meera can’t refuse to Abhi. Rhea tells that she had emotionally blackmailed Abhi for the marriage.

She knows why Abhi will not stop the marriage. She tells that just Pragya can stop the marriage. Pallavi gets a dress for Rhea. She shows the dress to Dida and Vikram. She waits for Ranbir. Ranbir is all stressed for Prachi. Pallavi doesn’t want Prachi to trouble their family. Ranbir meets Pallavi. She tells that she had got a dress for Rhea. Dida asks him to gift the dress to Rhea and please her. Ranbir calls Jai home.

Pallavi goes after him to hand over the dress. Aaliya and Mitali conspire to lock up Rhea until the marriage completes. Rhea looks for Abhi in the storeroom. Aaliya tells that Abhi will never know her plans. Rhea realizes that Mitali lied to her, its a trap. Aaliya warns Rhea and locks her up in the storeroom. She tells that nobody will be able to hear Rhea’s voice. Rhea doesn’t want to lose to Aaliya’s plans. She fears that Prachi will get back to Ranbir once Abhi marries Meera. Abhi waits for Pragya.

Pragya is at home. She tells that Abhi wanted freedom from her. Abhi wants to explain the truth to Pragya. They both are away because of the misunderstands. He wants her to know that she has no strength to tolerate the truth. Pragya wants to lose her strength. He tells that love can’t get less until she has Kumkum of his name. He is sure that she will come to stop his marriage. Pragya wants to tell him that she loves him a lot. She gets his pictures.

She feels that its a sign of fate that they have to unite. She wants to change Abhi’s decision. She wants to get Abhi back from Meera. She decides to unite with Abhi. The love emotions finally get over their ego. She is determined to reach Abhi’s house and stop the marriage. Pragya gets the police home to stop Abhi’s marriage. She wants Aaliya and Meera to get arrested for getting Abhi married, when his first wife is alive. Abhi is surprised by her bold move.

Abhi waits for Pragya for a long time. He calls her up. She tells her that she has decided something. He sends his marriage invite to her. She tells him that he has sent the invite again. He tells that he wants to remind her the date. He tells that she won’t be able to see his marriage with Meera. He irritates her with the talk. Purab stops him. Abhi tells that he is the groom today, he likes to trouble Pragya. Purab doesn’t want him to trouble Pragya further. Abhi looks happy. Aaliya knows that Abhi will not think of Rhea at this time.

Rhea asks if Pragya will come and revive the love in Abhi’s heart. Aaliya pities Pragya who can’t do anything right now. She tells that she wants to invite Pragya on her own. Sarita wants to know if Pragya is going to the marriage. Pragya resolves to get back her love. Meanwhile, Ranbir tells Jai that he wants to convince Prachi. Jai asks him to make an own song for pleasing her. Ranbir doesn’t like the cheap plans. Pallavi learns that Shahana had come to meet Ranbir. Shahana looks for Aryan. She meets Ranbir. She asks him to call Aryan.

Ranbir asks her to sort the fight herself. Jai tells her that he gave her an idea to sing a romantic song for Prachi, but he didn’t understand the idea. Ranbir promises to try the idea on Prachi. Shahana tells that he will marry Prachi, then she won’t say anything against him. Shahana tells them that Prachi can’t marry without her wish. Pallavi hears their conversation. Ranbir sees her spying on her. Ranbir wants to know why is she not understanding him. Purab tells Abhi that he can’t forget his love, its the love which will last till the final breath.

He asks Abhi not to marry Meera for Rhea’s sake. Abhi tells that he isn’t marrying Meera for Rhea’s sake, the reason is Pragya herself. Ranbir tries to fool Pallavi by his nonsense talks. Ranbir and Jai confuse her. Pallavi tells them that she doesn’t understand their generation. Abhi tells that Rhea is immature, but Pragya is adamant like kids. He tells that he loves Pragya a lot, he had gone to take her help, but she got rigid. He tells that Pragya loves him, but she forgot his love, she just remembered his mistakes. He tells that she said she is happy for his marriage. He asks Purab to know about his pain, that his lover has forgotten him. He wants to give a shock to Pragya so that her love comes out of her heart. He wants to get Pragya and daughters back in their life.

Reviewed Rating for this particular episode Kumkum Bhagya 14th January 2021 Written Update Pragya stops wedding: 4/5 This rating is solely based on the opinion of the writer. You may post your own take on the show in the comment section below.