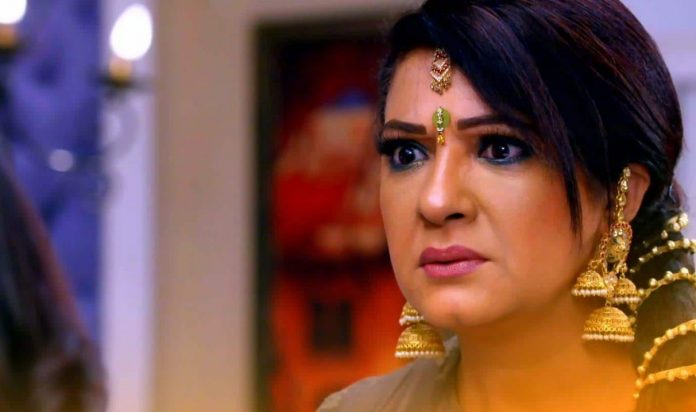 Kundali Bhagya 13th January 2021 Written Update Kareena rages Preeta and Shrishti find Ruchika escaping from the back door. They realize that Akshay is really cheating on Kritika. Preeta tells her that its important for Karan to know that Akshay is indeed doing wrong with Kritika, Ruchika just ran away from the back gate. She is sure that Karan will believe her, he will not wish anything wrong to happen with Kritika’s life.

She tells Shrishti that she needs to talk to Akshay about Kritika and Akshay’s marriage. Sameer gets to hear Preeta and Shrishti’s discussion. He has also seen Ruchika running out. He also believes Preeta is right and Akshay is wrong. He supports Preeta. Sherlyn tells that Mahira was going mad to take a step against Preeta. She tells Mahira that she got a way to take revenge on Preeta. She tells that Preeta had threatened her in Manali, she had insulted them badly, she will pay a price for it. She hates Preeta.

She tells that Kritika will run to Kareena to take help, Kareena will hate Preeta once again, Preeta will get ousted when Karan finds Kritika crying. She mentions that Preeta will lose to them. Mahira gets happy with her plans. Preeta checks the sweets. Shrishti tells her that Akshay isn’t a right guy for Kritika. Girish overhears them and supports Preeta. He asks her to go, he will handle the sweets boxes. Shrishti and Preeta enter the guest room to catch Ruchika.

They know Ruchika is hiding in the room. Preeta tells that Akshay wants to introduce Ruchika to the family. They fool Ruchika by telling that Kritika has sacrificed her love, Akshat wants to marry Ruchika now. Ruchika gets Akshay’s message. She gets worried knowing Preeta is trapping her. Preeta doesn’t see Ruchika inside the cupboard. They rush to find Ruchika downstairs near the back gate. Ruchika thinks to escape from the back gate. Preeta and Shrishti look for Ruchika. Shrishti asks Sameer if he had seen any girl escaping.

He wants to know who is she. She tells about Akshay’s girlfriend. Shrishti reveals the entire story to Sameer. Ruchika gets spotted by Sameer. Shrishti tells that she can prove the truth to the family but she had to give away Akshay’s phone. She tells that Akshay is dual-faced, they have to expose his truth to save Kritika.

Meanwhile, Ramona takes this good opportunity to instigate Kareena against Preeta. She tells Kareena that she is Kritika’s mother, but she doesn’t know anything about the happenings.

She tells that Preeta has accused Akshay for cheating on her. She asks Kareena not to think that she is brainwashing her against Preeta. Kareena wants her to tell everything clearly. Ramona can see that Kareena is happy and is going out of the way to please Akshay’s family. She asks Kareena not to trust Preeta, else Akshay won’t be pleased. Kareena wants to know what’s wrong. Ramona tells her about the blaming move by Preeta. She tells that she isn’t telling this to get Preeta’s place for Mahira in the Luthra family. She expresses her fake concern for Kritika.

Kareena is much shocked. Preeta has failed to prove Akshay guilty. She doesn’t want Kritika’s life to get ruined. She is determined to stop the marriage at any cost. Shrishti and Sameer team up with Preeta to expose Akshay’s cheat. Kareena gets raging at Preeta for spoiling Kritika’s marriage. What will happen next? Keep reading.

Reviewed Rating for this particular episode Kundali Bhagya 13th January 2021 Written Update Kareena rages: 4/5 This rating is solely based on the opinion of the writer. You may post your own take on the show in the comment section below.