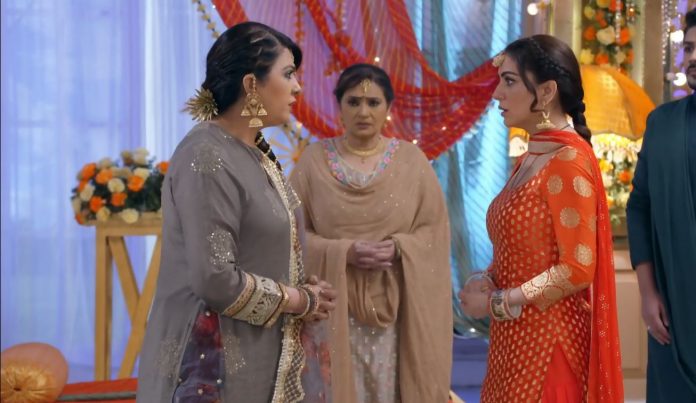 Kundali Bhagya 14th January 2021 Written Update Preeta humiliated Ruchika leaves from Luthra house and messages Akshay to beware of Preeta. Sherlyn and Mahira befriend Akshay, knowing he is also against Preeta. Preeta tells Shrishti that Karan should know about Akshay’s truth. She knows that Karan will not wish anything wrong to happen with Ruchika, he would also help them. Akshay tells that he felt bad of Preeta’s blame, but he didn’t mind it. Mahira tells that he is a nice guy to forget it soon. Rakhi and Kritika praise Preeta. Sherlyn and Mahira get bored on hearing everyone sing Preeta’s praise.

Rakhi feels proud of Preeta. Preeta looks for Karan to tell him the matter. Shrishti tells that Akshay is a bad person, but his parents are really good. Sameer tells that Akshay’s parents have no idea about him. He is relieved that Kareena didn’t know about Preeta, else she would have scolded her. Kareena wants to make Kritika’s marriage perfect. She tells Bani that she wants to fulfill Kritika’s dreams. Bani asks her not to take any tension. Kareena thanks her.

Kareena loses his cool. She vents her anger on Preeta. She blames Preeta for ruining Akshay and Kritika’s marriage. Karan takes a stand for Preeta. He admits that he loves Preeta a lot and doesn’t need to prove it to anyone. Kareena tells that she will not let anyone ruin Kritika’s life. She tells Ramona that she will take charge and stop Preeta. Ramona instigates her against Preeta further.

Preeta stops Karan to tell him that she has seen Ruchika running from the back gate. She tells that Akshay mentioned that Ruchika is his friend, Ruchika had escaped from the window. He asks her if she has seen Ruchika getting down the window. Preeta tells him that Akshay accepted the blame later, he should have asked Ruchika to go from the front door if she is just a friend. Karan tells that Akshay is a nice guy, he will keep Kritika happy, the reason behind Ruchika’s escape can be anything else, like she is a new visitor in their house.

He doesn’t want Preeta to don the thinking cap all the time and spy around. He asks her to stop spying and enjoy the Jaago function. Ramona tells Mahira that she had brainwashed Kareena against Preeta, now Kareena will target Preeta and oust her from the house. Sherlyn and Mahira like Ramona’s smart plans. Ramona is upset with Sherlyn who had taunted her some time back. She asks Mahira to see the result of her plan. Kareena looks for Preeta. Sameer is scared of her. He alerts Shrishti and goes away. Ramona wants to see the drama and enjoy.

Kareena asks Preeta to let the marriage functions happen well, else she will be responsible. She asks Preeta to hand over the gifts to the guests. She wants everything to be perfect in the marriage. Sherlyn tells Ramona that she has to be with Preeta and gain good points in front of the family. Preeta does a Bahu’s duty by siding her doubts. Kareena pleases the guests while they make a leave. Sherlyn wants to take some rest.

Sameer tells Preeta that he will drop Shrishti home. Preeta also accompanies Shrishti and Sameer. Rakhi knows that Preeta is tolerating Mahira. She feels lucky to get a Bahu like Preeta. She wants Mahira to understand her mistake and leave the house. Kareena further humiliates Preeta after the guests make a leave. Kareena tells that no one would like the blame on character. She wants Kritika to know that Akshay and his family are really perfect for her. She insults Preeta, while Karan steps in to defend his wife. Kareena doesn’t want Preeta to break Kritika’s marriage. Mahira enjoys the drama.

Reviewed Rating for this particular episode Kundali Bhagya 14th January 2021 Written Update Preeta humiliated: 4/5 This rating is solely based on the opinion of the writer. You may post your own take on the show in the comment section below.