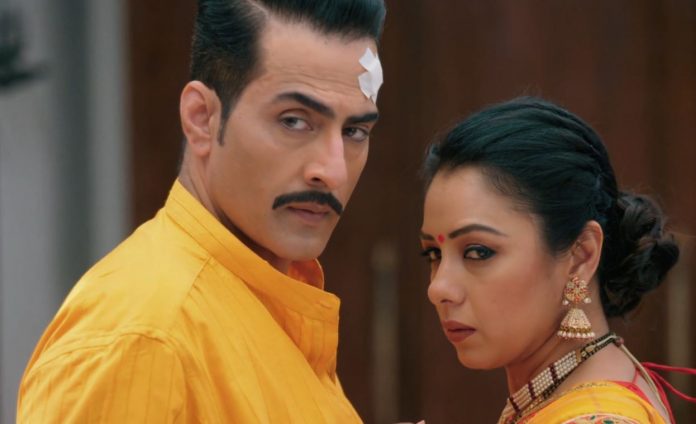 Anupama Written Update Love twists 14th January 2021 The family is glad that Vanraj is recovering. Pakhi wants to go on shopping for Vanraj. Joy comes home with Vanraj’s arrival. Leela is upset with Anupama again. She wants Anupama to ask Vanraj for his needs. Vanrah relieves Anupama of her duties. Anupama is happy to see the family smiling. Samar makes plans for celebrating Makar Sankranti with the family. Pakhi tells that Vanraj will win the kite flying competition like always. Anupama recalls her childhood dreams.

She also liked to fly kites. Anupama tells them that she will also fly kites as she used to do in childhood. Leela tells that they didn’t know Anupama’s talents. Vanraj realizes her mistakes of cursing Anupama. He thought she is just a homemaker who can just cook food in the kitchen. Anupama tells that she is finding herself once again, she wants to relive her childhood. The family supports her. Pakhi announces a competition between Anupama and Vanraj.

Samar doesn’t want the fun to spoil. He meets Nandini and asks her to come home for flying kites. He tells her that Anupama’s talent has come in her blood as well. She feels that his mother is amazing. He tells that they always take mothers for granted, they don’t think of mother’s aspirations and talents. They buy kites for the family. Samar buys a kite for Nandini as well and expresses his feelings, which are already known to her.

He tells that he can’t lie to her, so he crosses his friendship lines sometimes. Anupama prepares for the festive. Leela gifts her a saree and pleases her. She asks Anupama to get a kurta for Vanraj. She makes her health excuse. Anupama doesn’t want to refuse to Leela and upset her. Vanraj recalls Kavya and his conversation. He had clearly told her that Anupama has accepted his relation heartily, he will be going home to stay with his family. Kavya is scared that Vanraj can fall in love with Anupama, which he didn’t think of ever. Vanraj sees Anupama.

He recalls their fond memories from the past. He starts admiring Anupama. He wonders why Kavya felt that he is falling in love with Anupama. He doesn’t think its possible. He likes to be with the family. He also likes Anupama’s caring gestures. He thinks Kavya is crazy to think of that. He tells Anupama that he didn’t know that she can fly kites. She tells that he never tried to know about her. She asks him to choose the kurta he would wear on the festive.

She tells that Kavya told about his choice. Vanraj wants to wear the clothes of Anupama’s choice. He plans the twinning. He tells that he has changed his choice. Anupama is surprised. She offers prayers on the festive day. Leela criticizes Kinjal’s efforts. Vanraj mentions a past moment with Anupama. She feels awkward. The family is excited for the kite flying competition.

Samar and Hasmukh encourage her to fly kite well and win. Leela wants to show her talents as well. She asks Kinjal to invite Rakhi to see her talent. Kinjal tells that Rakhi won’t come on the festive, because she is scared of the kite strings. Leela doesn’t want Kavya to come. Vanraj gets stuck in the buttoned kurta. He calls Anupama for help. He doesn’t think he should take her help. Anupama helps him. She recalls his cheat. They get into a moment disturbed by Kavya’s call. She doesn’t want her nuptial chain to break like the last time. Vanraj shows his gratitude towards her. What will Kavya do on seeing Vanraj getting close to Anupama? Do you think Anupama should forgive Vanraj? Comment below and keep reading.

Reviewed Rating for this particular episode Anupama Written Update Love twists 14th January 2021: 4/5 This rating is solely based on the opinion of the writer. You may post your own take on the show in the comment section below.