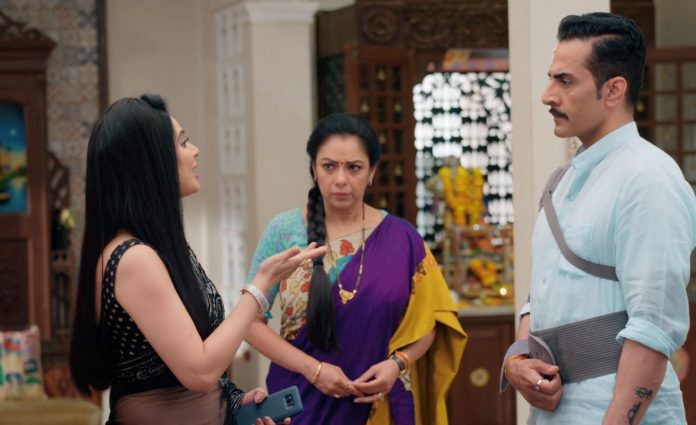 Anupama Written Updates Rebuking twists 19th January Kinjal asks Rakhi not to force her to misbehave. She didn’t wish Rakhi to get a washing machine. Leela suspects that Kinjal told her about their needs. Kinjal tells that she didn’t tell anything to Rakhi. Anupama believes Rakhi. Rakhi asks Leela not to create issues and instead appreciate the gift. Anupama asks her to take the machine back. Rakhi asks her to pay for the machine if she is feeling bad. She insults Anupama. She comments on the financial status of Shah family.

She asks Anupama if she will pay the EMI of the machine or run the house by doing a small job. Vanraj gets to hear the matter. He surprisingly takes a stand for Anupama. He tells that he will not tolerate anything against his wish. He tells that he can buy any costly washing machine for his wife. The family is surprised, while Rakhi gets another chance to insult Vanraj and Anupama. She tells Paritosh that Vanraj got his memory back, he remembers that Anupama is his wife.

She knows that Anupama will not make Kinjal wash the clothes, but Kinjal will feel bad when Anupama washes the clothes by her hands. She tells that her intentions are not wrong, she just thought for Kinjal and Anupama. Kinjal believes Rakhi. Vanraj tells that he was wrong since Kinjal got easily manipulated by Rakhi. Kinjal tells that the matter is getting dragged because of Vanraj. She defends her mother. Rakhi feels happy after creating a scene in the house. Anupama refuses to accept the machine. She tells that she will not make Kinjal wash the clothes. She asks Rakhi to take the gift back. Rakhi makes an emotional plea to Kinjal.

Kinjal feels nobody understood Rakhi who thought good for Anupama. Anupama gives away the machine. She sees Kavya in the opposite house. She realizes that Kavya shifted close to Vanraj’s house. Rakhi further angers Vanraj by asking him about his wife. Vanraj doesn’t see Kavya. He tells her that he is alive to fulfill his wife’s needs and worry for her. Vanraj doesn’t want Rakhi to test his patience. Rakhi shows Kavya to him. He realizes Rakhi’s plans. Rakhi tells Kavya that Vanraj has become Anupama’s possessive husband. She instigates Kavya against Vanraj.

He tells that its good for everyone if Anupama is changing her decision. Anupama confronts Vanraj for calling her wife when their relation has ended. She finds Vanraj sleeping. She doesn’t get her answers. Anupama gets a surprise from Leela. She thanks Leela and Hasmukh for getting the new washing machine. Leela tells that Vanraj has got the gift for her. Anupama doesn’t feel happy. Leela tells that Vanraj is changing, he is caring towards Anupama now. Anupama goes to rebuke Vanraj. She tells that she used to do all the work herself, he never cared for her before.

Vanraj tells that he can see her efforts now, he used to be at office all the time and never saw her painful efforts for the family. He tells her that he can see everything now when he is seeing her take care of his family. He tells that she also has shown her care despite their differences. He also shows his care for his wife. Anupama limits him from saying anything awkward. She clears to him that she isn’t his wife, she is just Anupama, she may have all relations in the family, except her relation with Vanraj. She tells that its decision to not accept him. He wants to get back Anupama. Kavya returns to Anirudh after seeing Vanraj going back to Anupama.

Reviewed Rating for this particular episode Anupama Written Updates Rebuking twists 19th January: 3/5 This rating is solely based on the opinion of the writer. You may post your own take on the show in the comment section below.