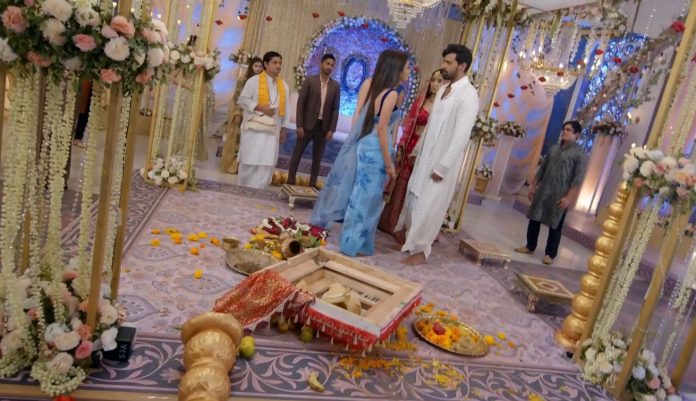 Abhi asks Aaliya not to interfere between their personal matter. He tells that just Meera has a right to comment between their personal matter. He hurts Pragya by giving more importance to Meera. He tries to make Pragya jealous. He tells Pragya that he is marrying Meera and nobody can stop her. Meera asks Pragya to leave them alone and let them stay happy. Pragya tells that she was cheated to sign the divorce papers. She asks Abhi why did he sign the papers willingly. Abhi tells that he had no option when she left the house.

He asks Pragya to decide what she wants to do, if she wants to stay with him. He tells that she didn’t say what he wanted to hear from her. He tells that he is fed up of the arguments, he will marry Meera in the temple. Pragya asks Abhi not to marry Meera. She tells him that she is ready to apologize to Abhi. She wants to know what does he want to say. Meera asks pandit to accompany them. Abhi and Meera leave for the temple. Purab relieves the guests of the drama.

Rhea calls Shaina and tells that she has finally won over everyone. She tells that she wanted her parents to get married, she can marry Ranbir now. Shaina informs about Jai and Palak’s marriage. She asks Rhea to come there, Ranbir is also there to witness the marriage. Rhea wants to meet Ranbir and convince him for marriage. Shahana feels upset that she is lying to Prachi. Jai asks Shahana does she love Aryan. She denies it. Ranbir tells that he has come to marry Prachi, they shouldn’t argue. He gives the bridal dress for Prachi.

Shahana tells that Prachi will not listen. Ranbir requests Shahana. Meanwhile, Pragya is broken that Abhi isn’t calling off the marriage. He is tired of her silence. Pragya doesn’t know what she should do. She wants to meet Baljeet. Aaliya stops Pragya from entering the house again. She asks Pragya to stop playing emotional cards. She reprimands Aaliya for ruining her life, by taking her signs on the divorce papers. She tells that she will always stay in Abhi’s fate. Aaliya doesn’t listen to her nonsense. She asks Pragya to just get lost and not do any drama.

Aaliya throws out Pragya from the house. She doesn’t want Pragya to barge into the house again. Pragya rushes to the temple to stop the marriage. She doesn’t know about the temple address. The watchman helps Pragya knowing she is Abhi’s ex-wife. Pragya runs inside the house. Aryan surprises Ranbir with the pandit’s entry. Ranbir tells pandit that he is the real groom. He explains the groom swapping game to the pandit. Ranbir then confuses about the bride swapping move also. Pandit asks how can this happen if the bride doesn’t give her consent.

Ranbir explains that Prachi doesn’t want to marry him, but loves him. They explain the whole story to the pandit. Pandit is left confused. Aaliya goes to check on Rhea. She tells Pallavi that Pragya can’t step in the house, Meera will get her rights. Pragya checks for Baljeet. Aaliya can’t believe that Pragya is back again. Pragya meets Purab. She asks his help. She tells that he loves Abhi, but she also means something to him. He is ready to help her. She tells that she wants to stop Abhi’s marriage. She accepts that she was foolish to let Abhi marry Meera.

Purab tells about the temple. She is grateful to him. She tells that she will not let Abhi marry Meera. Aaliya wants to make Pragya out of the house. Vikram doesn’t want her to talk to Pragya rudely. Pallavi also asks Aaliya to behave her manners. Pragya leaves the house without answering Aaliya. Aaliya wants to know how did Pragya come in. Pragya tells that she has gate crashed to come inside. Aaliya rebukes Purab for telling Pragya about the temple. Purab knows that Aaliya has sided the family against Pragya.

She tells that Pragya won’t be able to stop the marriage, Abhi and Pragya got divorced already. Purab tells that he can’t believe that Abhi and Pragya signed the divorce papers. He tells her that he was happy to be away from her. He gets rude towards her. He curses her that nothing will be good for her, if she doesn’t respect others. Pragya finally reaches the temple to stop the wedding in the nick of time.

Reviewed Rating for this particular episode Kumkum Bhagya 20th January 2021 Written Update Desperate twists: 2/5 This rating is solely based on the opinion of the writer. You may post your own take on the show in the comment section below.