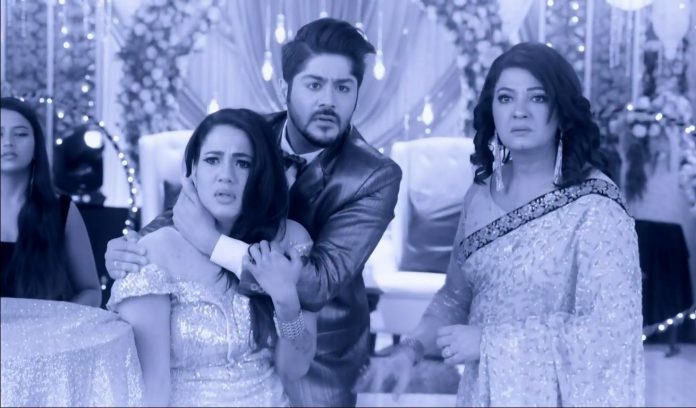 Kundali Bhagya 21st January 2021 Written Update Awry twists Sherlyn and Mahira get glad seeing the drama. Preeta sheds tears, while Shrishti supports her. Shrishti questions Megha for lying and framing Preeta. Preeta doesn’t lose her courage. She tells Megha that she should have not spared Akshay for his wrong act, but she is actually saving her molester. Akshay had involved Megha in the drama by bribing her. He wants her to lie to Luthra family about Preeta. He tells that Preeta is ruining his life, she has to lie and make Preeta fall in the family’s sight.

He tells Megha that she should give a reason to the family that Preeta wants him to marry her sister Shrishti. He tells that he wants to get rid of both Preeta and Shrishti. Preeta wants the family to believe her. She tells that she has no reason to break the marriage. Akshay argues with Preeta. He tells the Luthras that Preeta actually wants him to marry Shrishti. Preeta can’t believe the reason. Karan is also shocked. Sarla and Janki make an entry and learn the new blame from Akshay. Akshay tells a fake story that Preeta and Shrishti were targeting him since many days. He threatens to reveal the truth.

He blames Shrishti, who wants to marry him. Sameer knows that this is not the truth. Shrishti tells that its not truth. Sameer takes a stand for Shrishti, knowing she loves him. Sarla is hurt that her daughters are framed again. Karan tells that Shrishti can never fall for anyone like that. Preeta tells that Shrishti will never want to marry Akshay. Sarla asks Akshay if he knows Shrishti before blaming her. She tells that everyone knows about Preeta and Shrishti.

It gets torturing for Aroras. Kareena falls in Akshay’s words. She feels Shrishti really aimed to marry Akshay. Preeta tells that Akshay isn’t a suitable guy for Shrishti or Kritika. She threatens Akshay of exposing his true colours.

Akshay’s mum argues with Sarla for calling her son characterless. Sarla tells that she isn’t blaming anyone, she is just defending her daughters. She asks her to teach her son not to insult any girl. Akshay tells that Preeta has assassinated his character. He is ashamed to say that Shrishti was flirting with him. He tells him that Shrishti hugged him when they met on the road. He lies about her cheap advances. Shrishti cries on his blames. Akshay tells that Shrishti had evil intentions towards him.

Shrishti tells them that she hugged Akshay like a friend, he is lying about her. Kareena reprimands Shrishti. Preeta believes Shrishti. Kareena tells that Preeta is an expert in lying and breaking relations. She tells that Preeta has done everything for Shrishti’s sake. She is glad that Preeta’s plan has failed. Preeta tells them that everyone is thinking wrong, Akshay is a wrong guy for Shrishti and Kritika also. Karan wants to discuss the matter with the family.

Rakhi tells that Preeta and Shrishti can’t be wrong. She supports them. Bani believes Kareena. Sarla tells them that Shrishti is immature, she can never trap anyone in love. She tells that she would have punched Akshay. Sameer shows his faith on Shrishti. He tells her that he trusts her. He asks her to stop crying. Kritika is shattered. She tells that she knows everyone well. She is hurt by their arguments. Sarla tells them that Shrishti isn’t wrong.

She can’t tolerate them to accuse her daughters. She tells them that a normal hug doesn’t mean that Shrishti intends to marry Akshay. She tells that she was getting blessings for Kritika, she don’t want to curse anyone. Preeta wants to take Sarla home. Karan tells Rakhi that he will drop Aroras home. He turns sensible like Rishabh. He supports Sarla and her daughters. He asks Sarla to let anyone think anything about Shrishti.

He tells that their thinking about Shrishti matters. He adds that he is also like Sarla’s son, he knows Shrishti who can never do anything wrong. Shrishti is thankful to Karan for supporting her. Karan tells that Akshay is narrow-minded, maybe its a misunderstanding. He pacifies Sarla. He handles Sarla well, which makes Preeta proud. Sarla tells Preeta that she had already told not to get involved in the matter and blame Akshay until she has evidences. She knew nobody will believe Akshay. Sarla hugs Preeta and asks her to be careful while she takes any step against Akshay.

Reviewed Rating for this particular episode Kundali Bhagya 21st January 2021 Written Update Awry twists: 1/5 This rating is solely based on the opinion of the writer. You may post your own take on the show in the comment section below.