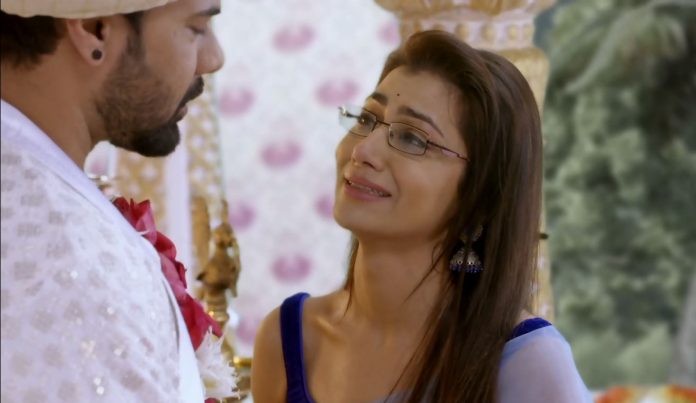 Kumkum Bhagya 21st January 2021 Update Pragya confession Shahana fools Prachi and asks her to wear the bridal dress. Prachi doesn’t want to have the dress. She wants to meet Palak. Shahana gets worried. Digvijay wants to tackle Abhi. Pragya is going mad while thinking of Abhi, that he will be marrying Meera. Pragya asks the driver to give her the car, she wants to speed the car and rush to the temple, she has to save her husband’s marriage. She drives rashly. Driver asks her to drive slow and not meet with an accident.

Abhi thanks Purab for guiding Pragya to the temple. He wants things to happen as he wants. Abhi and Meera play the marriage drama in front of Pragya. Digvijay hires an assassin. He asks him to kill Abhi, who is at the temple right now. Prachi meets Palak, who tells that Shahana and Aryan are involved in the plan. Palak tells that she isn’t getting married. Ranbir stops Palak from telling anything else to Prachi. Prachi wants to avoid Ranbir.

She tells that Palak told her everything. Ranbir tries hard to mislead her. Pragya hits the assassin by her car. She apologizes to him. She can’t help him much. The assassin tells that he has urgent work as well. He doesn’t let her check the gun case. He rushes to the temple. Driver agrees to take Pragya by driving at the speed she wants. Prachi tells that Shahana forced Palak to lie. She asks Shahana the reason for the setup.

Shahana and Aryan lie to Prachi again to save Ranbir. Aryan wants them to just let the marriage happen. Ranbir looks forward for his marriage. Moreover, Pallavi is against Pragya. Vikram explains her that he loves his wife, as much as Abhi loves Pragya. He knows Abhi well. He tells that Prachi and Rhea have fights between them, Abhi and Pragya got issues because of their daughters. Aaliya asks them about Abhi’s marriage at the temple. She doesn’t know anything. She vents angry on the guard who let Pragya in.

Pallavi doesn’t know if Abhi will agree if Pragya stops the marriage. Vikram is sure that Abhi will agree. The assassin reaches the temple to kill Abhi. Pragya arrives there at the same time. Abhi misses her. He waits for Pragya. Pragya is disturbed thinking he would have got married by now. Pragya finds Abhi and Meera exchanging garlands. She stops them. Abhi tells that he will marry Meera in front of her. Pragya tells that the marriage is wrong. She puts off the havan fire. She doesn’t want to fight him further. The assassin sets target to kill Abhi.

Aaliya vents anger on the guards. Digvijay asks the assassin to shoot Abhi. Pragya tells that she will not let Abhi marry anyone. She asks him to know that their marriage is of seven births. He tells that marriage has ended by the divorce. She reveals that Aaliya had kidnapped Prachi and made her sign the divorce papers by lying to her. Abhi asks her not to come back to ask her rights. She tells that she didn’t come back for the property. He wants to know the reason for her return. He tells that she always counts his mistakes, why does she want him back in her life. Pragya tells Abhi that she loves him a lot like before.

She finally confesses her love. Meera gets glad that Abhi’s plan actually worked. Pragya tells that she told bitter things to him in anger. He confirms that he loves her. He feels overjoyed. He tells that he wants to believe her. She confesses her guilt. She tells that she had always cursed herself that she left the house and separated her daughters too. She regrets that her anger ruined their relationship. She can’t live without him. Abhi gets emotional when she expresses her real emotions. Pragya proposes Abhi for marriage. She tells that she wants her husband and rights back. Abhi accepts her proposal. Will the assassin shoot down Abhi? What would happen next? Keep reading.

Reviewed Rating for this particular episode Kumkum Bhagya 21st January 2021 Update Pragya confession: 4/5 This rating is solely based on the opinion of the writer. You may post your own take on the show in the comment section below.