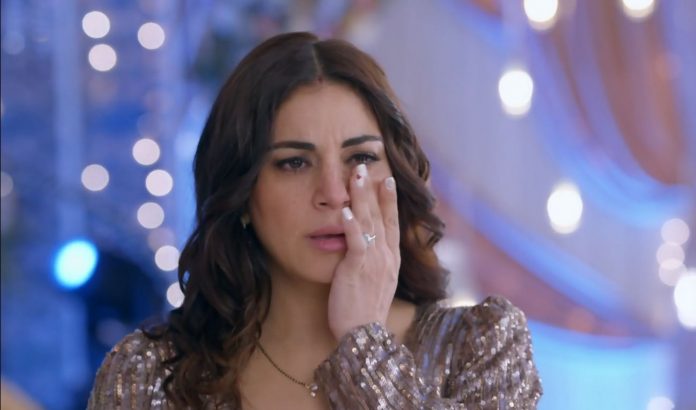 Kundali Bhagya 22nd January 2021 Written Update Game changes Mahira informs Ramona that Preeta hired Megha to accuse Akshay, but Megha changed her statement in the final moment. Ramona can’t believe that Preeta is so dumb. Sherlyn tells that Preeta is really silly, she can easily get convinced against anyone. She reveals that Mahira and she had fooled Preeta. She tells that Akshay is smart, he didn’t do anything wrong, so Preeta had planned this against him.

Ramona asks Sherlyn to think well, Preeta can’t hire any girl to call Akshay a liar if he is innocent. She asks them to assume that even if Kritika’s alliance breaks, Preeta has no reason to fix Shrishti’s alliance with a wrong guy like Akshay. She tells that if Preeta cares for Kritika, she can’t make Shrishti marry Akshay. She tells that Preeta won’t get anything this way. She tells them that Akshay had bribed Megha and hired her to ruin Preeta’s image and prove her wrong in front of the family.

She adds that he has cleaned his own image by proving Preeta wrong. She reveals that Akshay is a player. Sherlyn tells that Akshay has done their work against Preeta. Mahira tells that Akshay has taught Preeta a good lesson, she deserves it. Sherlyn wants Preeta to apologize to Akshay. Meanwhile, Akshay meets Preeta. He tells her that Sameer was much worried for Shrishti, but Kareena stopped him. She warns him to stay in limits.

She tells that he will not have anyone to trust him one day. She asks him to save his own character. She doesn’t want him to accuse Shrishti. He tells her that she will also get into trouble if she troubles him. He warns her against spoiling his alliance. Akshay is thankful to everyone for showing faith on him. He tells that his life will be ruined if Preeta always insults him. He tells that he got saved because of Luthra family.

He tells that Megha has been daring to tell the truth against Preeta. Akshay knows that Preeta got embarrassed. Kareena wants Preeta to apologize to Akshay, who is like her son. Akshay and his parents want to leave the party. Kareena asks Preeta to say sorry when she had insulted him in front of all the guests. Bani asks Preeta to accept her mistake. Kareena compels Preeta. Kritika asks Preeta to forget everything like a bad dream. Karan gets disappointed with Preeta. What do you think about the game changing track? Comment below and keep reading.

Akshay asks Preeta to give her faith if she wants to give anything. He asks Preeta to tell Shrishti to stop dreaming about him. He insults her. He tells her that Kritika is his reality, his truth. His mum asks him to forget things and let go the matter. She forgives Preeta when the latter makes an apology. She tells that Preeta is also like her daughter. Bani tells that Preeta has done so wrong with Akshay and his family, who are just too big-hearted to forgive Preeta so soon.

Kritika hugs Preeta and forgives her. She wants Preeta to just move on by forgetting the entire incident for her sake. Preeta wants to know if Kritika doesn’t trust her. Kritika tells that she doesn’t want to doubt Akshay. She trusts Preeta a lot. Akshay tells Kritika that Preeta will understand them with the passing time, she will soon realize her mistake. Akshay and his family leave. Sameer feels bad for Shrishti. Kareena doesn’t let Kritika bond with Preeta more.

Karan asks Janki to take care of Sarla and Shrishti. Sarla wants Karan to support Preeta. He promises to always support Preeta if she is right. Shrishti is glad that he had trusted her. Karan drops them home and makes a leave. Preeta fears that Karan is disappointed with her. She regrets to hurt his feelings. He remorses that she always goes against his word. He doesn’t want her to disrespect herself by blaming anyone without the evidence. She just aimed to stop Kritika’s marriage with a wrong guy. Moreover, Rakhi tells the entire incident to Mahesh. She loves Preeta a lot and trusts her. She is in a dilemma. She can’t even call Akshay wrong. She feels answerable to Kareena and Bani.

She tells that she didn’t take a stand for her when Kareena had scolded her. She apologizes to Preeta for losing out in front of the family. Preeta tells that she didn’t feel anything bad by the family’s scolding. Rakhi tells her that Akshay knew that he is marrying Kritika, he would not take a big risk in their house. She tells that if she doubts Akshay’s character, then she would have done the same. She advises Preeta to be sure before accusing Akshay, since its about Kritika’s life. She doesn’t want Preeta to get any false blame. Preeta treasures her advice.

Reviewed Rating for this particular episode Kundali Bhagya 22nd January 2021 Written Update Game changes: 3/5 This rating is solely based on the opinion of the writer. You may post your own take on the show in the comment section below.