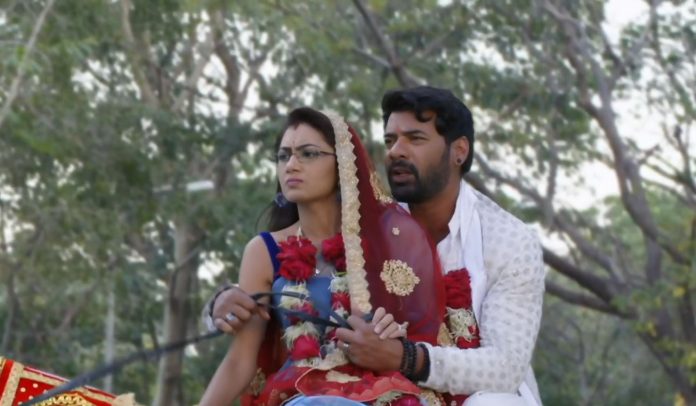 Kumkum Bhagya 27th January 2021 Written Update Big revelation Ranbir explains the confusion of the elders to Jai. Rhea calls Ranbir to ask about a dress. Ranbir gets to see Prachi in the bridal dress. He tells that its the most beautiful thing. Rhea thinks he liked the dress. Ranbir is mesmerized seeing Prachi. He asks Rhea if she is at some temple. Rhea wants to surprise him. Ranbir gets worried that maybe Rhea is also coming to the same place. Abhi and Pragya like the horse ride. She laughs on his jokes. She tells him that she likes the moment that he is taking her.

He tells her that they got married. He gets romantic talking of their honeymoon, when the shooter is following them. He tells Pragya that they got married again, even she can’t stop him from romancing. He wants to take her home. The shooter doesn’t want to leave the task incomplete. Abhi doesn’t know why is the shooter becoming a villain in their love story. He wants to take a short cut to confuse the villain.

Ranbir tells Aryan that Rhea has also arrived. He asks Aryan to handle Rhea. He tries hiding from Rhea. He takes Prachi with her. Digvijay calls the henchmen at the spot to assure that Abhi dies. Abhi tries to convince the horse to run again. He pleads for his life. Pragya asks Abhi to just do anything, but convince the horse.

Abhi dances to please the horse. All the henchmen are given the same task on meeting Digvijay. They are asked to terminate Abhi. Digvijay makes an entry. The henchmen ask about the person they have to kill. Digvijay announces a competition between them. He wants Abhi to get killed at the earliest. Digvijay’s identity gets revealed. He doesn’t tell anyone about his enmity. He tells them that they have to kill even Pragya if she comes in between. He wants Abhi to die. What enmity does Digvijay has with Abhi? Comment below if you like this track. Keep reading.

Reviewed Rating for this particular episode Kumkum Bhagya 27th January 2021 Written Update Big revelation: 3/5 This rating is solely based on the opinion of the writer. You may post your own take on the show in the comment section below.