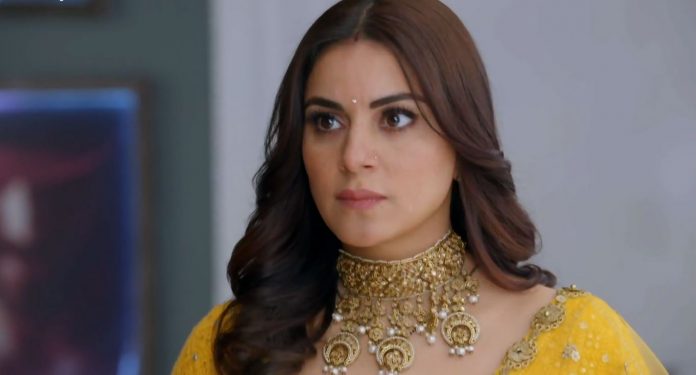 Kundali Bhagya 27th January 2021 Written Update Countdown begins Akshay calls up Preeta to speak to Kritika. Sherlyn tells Preeta that Akshay should call up on Kritika’s phone. Preeta goes to Kritika and doesn’t get a good response from her. Sherlyn tells Preeta that Kritika won’t take the call on her phone. Akshay shows his position in Luthra house. He tells that he is loving to watch Preeta’s misery. He threatens Preeta that he will punish Kritika after marriage. He knows that Preeta won’t be able to stop the marriage. He feels he is super smart. Preeta gets raged.

Akshay doesn’t think she can harm him. Preeta falls down, knowing Karan will always hold her. He tells her that he is always with her, but she shouldn’t fall in any risk. He doesn’t want her to go anywhere against his wish. She tries to clarify that she was with Shrishti. He doesn’t want to listen. He asks her not to do anything wrong.

She wants him to just listen to her and see something important. Kareena interrupts them. She asks Preeta to participate in the haldi ceremony with a smile for Kritika’s sake. She doesn’t want any drama in the function. She asks Preeta to just do her duty as a Luthra Bahu. Preeta is certain that she will deal with the problems. She fears that her relation is spoiling with Karan. She wants to find a way to solve the problems.

Preeta meets Akshay in his family in the haldi function. She tells Akshay that he has played many games with Kritika and Luthra family, but now she will not let him play with their emotions further. She tells that she will bring his truth in front of everyone. Akshay doesn’t think its possible. He accepts her challenge. Karan overhears a part of their conversation. He asks them about the challenge. Akshay is speechless, while Preeta tries to get Karan on her side. Preeta asks Akshay to begin the countdown. Do you think Preeta will expose Akshay in the haldi rasam or will the drama drag till the very moment when Kritika reaches the mandap? Comment below and keep reading.

Sarla feels like something bad is going to happen. She tells Janki that Preeta was in a miserable state, when everyone got against her. Sarla tells Janki that she will make a video call to Preeta and know her welfare. She calls Preeta to know if she is fine. She tells that she was worried for Preeta. She feels restless for her daughter’s problems. She asks Preeta not to do anything against Akshay that could land her in trouble.

She knows that Preeta wants to help Kritika. She asks Preeta to take care of herself and not earn more enemies. She knows that already Sherlyn and Mahira are against Preeta, and now even Akshay is adding troubles in Karan and Preeta’s marriage. Preeta tells that she will take care of herself. She doesn’t want her family to worry. Shrishti gets decked up to go out. Sarla doesn’t want her to go anywhere. She tells that Akshay has already accused her character.

She wants Shrishti not to interfere in the Luthra family matter. Shrishti tells that she is sure that she can handle the mess. Sarla asks her not to increase problems for Preeta. Shrishti doesn’t want Preeta to fall alone. Janki supports Shrishti. Sarla tells Janki that Shrishti is immature, she can make more mistakes and increase troubles for Preeta.

She tells that she will not let Shrishti get more serious accusations on her name. She knows that Kritika can take care of herself, if she is sure of Akshay. She knows that her daughters want to save Kritika’s future. Shrishti wants to expose Akshay’s truth. She is eager to see Akshay’s reaction when Preeta reveals his truth. She wants justice for herself. She knows that truth will eventually come out. She makes a plan to go out from the window. She wants to see Akshay in a miserable condition. She tricks Sarla and goes out to meet Preeta at the Luthra house.

Reviewed Rating for this particular episode Kundali Bhagya 27th January 2021 Written Update Countdown begins: 3/5 This rating is solely based on the opinion of the writer. You may post your own take on the show in the comment section below.