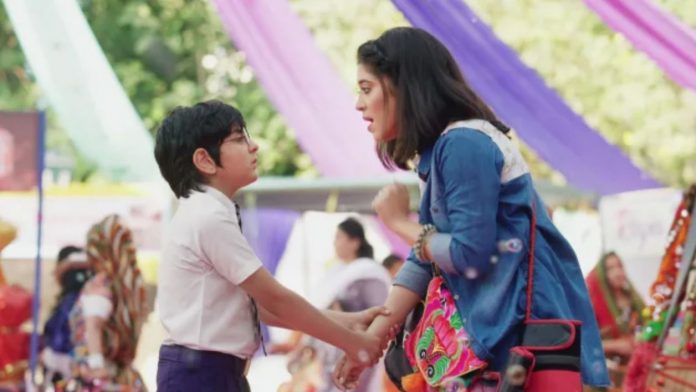 YRKKH Upcoming Sirat calls Kartik 26th January 2021 Update Sirat is deeply hurt by her stepdad’s odd behavior. She tells that her mother Sheela is the worst. She didn’t expect her mother to leave her in childhood and settle down with Mukesh. She cries that she never had a good family. She feels jealous seeing Sheela giving that missed out love to her son Nanko. She wanted Sheela to become her strength, but sadly she doesn’t have such good terms with her mothers.

Luckily, she has her grandma Maudi who understands her dreams and supports her unconditionally. Maudi had already met Kartik and wants such a good-looking guy to become Sirat’s husband. She wanted Kartik to marry Sirat, unaware that Sirat is replica of Kartik’s wife Naira. Sirat also gets to see Kartik outside the park where she meets her friend and expresses her sorrowful feelings regarding her broken family. Fate starts bridging the gaps between Kartik and Sirat through Maudi and Kairav. Kairav is also determined to meet Naira.

Kartik tells him that he couldn’t find Naira, but Kairav knows that he had seen Naira only, it wasn’t his imagination. Kartik and Sirat have a close hit and miss. Kartik is dejected that Kairav’s hope has broken down. He didn’t wish to leave Kairav alone in the hostel. He still leaves Kairav to keep his heart. He hears Sirat’s side of sad story. He feels that life has given sorrow to everyone in different forms.

He wishes that she gets relieved of her problems. Sirat gets a glimpse of Kartik and falls for his good looks. She wishes to know about him, but sticks to her goals of making a career in boxing. She doesn’t meet Kartik. Kartik returns home with sorrow again, that his Naira can never come back to them. He finds Rhea looking after Akshara. He is thankful to her. Rhea’s love for Akshara gives a hope to Surekha. Surekha wants to get Kartik and Rhea married, since they both are single now.

She tells that she will consider Rhea as a suitable girl for Kartik who would take care of Kairav and Akshara as well. Suwarna doesn’t think Kartik will give his nod for the marriage. She tells that Kartik will always live with Naira’s memories, he will never marry anyone in his life. Suwarna is right about Kartik since he never wanted to marry Vedika, who was also suitable to him when they assumed Naira dead. Suwarna knows that Kartik will never give Naira’s place to anyone else, just he is the replacement for Naira in his children’s life.

She tells Surekha that Kartik will never agree to their ideas. Kartik and Naira’s love story is known to Rhea. Rhea is a divorcee who is moving on in life with a positive spirit. Sirat learns about the kind guy who had helped Maudi in the market. She wants to personally thank him. She gets Kartik’s contact number. She wants to talk to Kartik to thank him. Will she reach out to Kartik? Will Kartik learn about the alliance match up going on in his family? Will he agree to marry Rhea, or will Sirat enter his life? Is Sirat really not Naira? How will Kartik love Sirat, if she isn’t Naira and just a lookalike? To know more, keep reading.

Reviewed Rating for this particular episode YRKKH Upcoming Sirat calls Kartik 26th January 2021 Update: 3/5 This rating is solely based on the opinion of the writer. You may post your own take on the show in the comment section below.