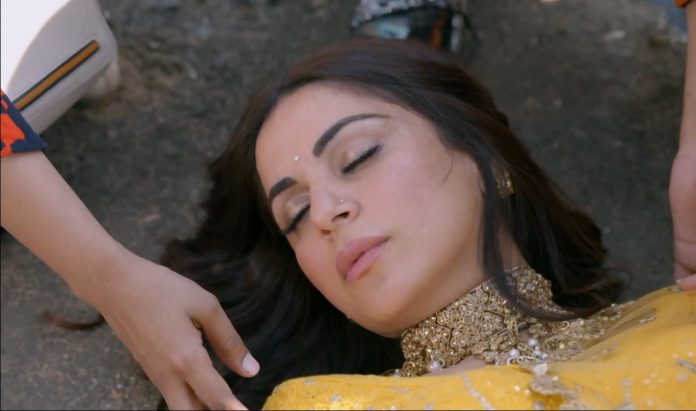 He asks him to steal the envelope from them and also their phones. He doesn’t want the evidence to reach home. He forwards Preeta and Shrishti’s pictures. He tells that they should not come home with the evidences. Sameer spies on Akshay. He asks Akshay to come for the haldi. Akshay lies to him.

Sameer knows that Akshay was talking to someone. Sanjana praises Mahira, but Rakhi shows Mahira her place. Sherlyn is trying to get Mahira the Bahu position. Rakhi proves that Mahira is just an outsider. Mahira wants revenge on them when she becomes a family member. Karan applies the haldi to Kritika and Akshay. He is unhappy that Preeta isn’t with him.

Sameer doesn’t tell Karan that Preeta isn’t at home. He tries to distract Karan. He tells that Preeta has planned a sweet surprise for Akshay’s family. He stops Karan from searching for her. Karan wishes that Akshay’s family appreciated her surprise. Akshay doesn’t want Preeta to bring more hurdles. Babu waits for Preeta and Shrishti. He finally spots them and hits the auto rickshaw with his truck. Preeta and Shrishti meet with an accident.

The people come to help them. Babu goes to collect the evidences. Shrishti is conscious. She gets super shocked on seeing Preeta unconscious. The people blame Babu for the accident, who runs away from the spot. Karan senses that Preeta is in trouble. He asks Sameer about her. Sameer tells that she is at home, she didn’t go anywhere. Karan doesn’t know the reason for his tension. Rakhi tells Kareena that Preeta didn’t apply haldi to Kritika. Kareena asks Karan to do the rituals on Preeta’s behalf. Sameer angrily shows his annoyance towards Akshay. Sherlyn and Mahira await Preeta. Karan gets stressed about his ladylove. Shrishti tries to get help for her sister. Will Karan get to know the truth behind Preeta’s accident? Keep reading and please comment your views below.

Preeta gains consciousness. She asks Shrishti to check for the phone and pendrive. Shrishti gets the phone and pendrive, but misses the photos. Preeta tells Shrishti that they can get the pictures again, they shall go home as soon as possible. They don’t think its a planned accident. Preeta offers help for the auto driver. The truck driver gets caught. He lies to the police that the brakes weren’t working.

Sanjana asks Rakhi for Karan. Rakhi knows that Karan has gone to Mahesh. Bani tells that Karan has to apply the haldi from Mahesh’s side. Karan returns with the haldi for Akshay. Sameer wants Preeta and Shrishti to get extra time. Karan tells that Mahesh can’t come for the haldi, so he has got the haldi by making Mahesh touch it. The family gets emotional. Rakhi and Kareena tell Kritika that Mahesh’s blessings are always with her. Everyone blesses Kritika. Rakhi looks for Preeta. Preeta and Shrishti reach home.

They prep up to expose Akshay’s truth. Shrishti tells Preeta that she can’t come along. She wants to return home before Sarla knows about her absence. Preeta informs Sameer that she has come home. He tells her about his lie to Karan. She tells that she will meet the technician and present the pictures on the screen. Sameer calls Shrishti home. She tells him that she lied to Sarla to meet Preeta, she has to return home. He tells that there will be a big scene in the family, she should be here with Preeta.

He asks her to bear some scolding from Sarla. Shrishti gets convinced. She tells that she also wants to see Akshay’s reaction. She goes back to Luthra house. She wants to see what will Akshay do to defend himself. Sameer is excited to bring the truth out. Akshay doubts seeing Sameer smiling. He calls Babu to know if he did his work. He doesn’t know that Preeta has escaped. Preeta returns to the family which shocks Akshay. He didn’t expect her to come back soon. She asks Akshay if he missed her. Preeta tells everyone that she has a surprise for them. She asks Akshay if she should show his truth to the family. Akshay is tensed when she indirectly threatens him.

Reviewed Rating for this particular episode Kundali Bhagya 29th January 2021 Written Update Preeta knocked: 3/5 This rating is solely based on the opinion of the writer. You may post your own take on the show in the comment section below.