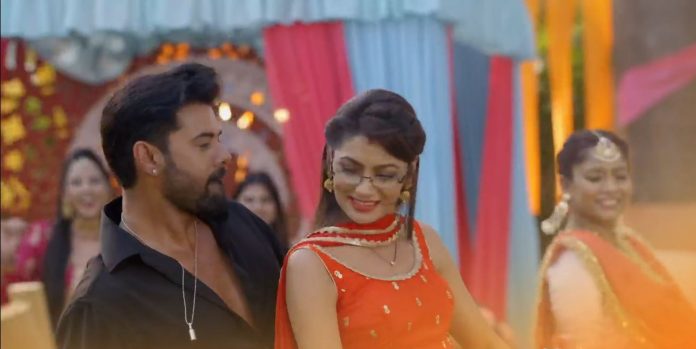 Kumkum Bhagya 8th February 2021 Update Abhi Pragya tricked Abhi and Pragya marry once again at the village temple. She tells him that she just wants to stay with him, in whatever situation they are. She is ready to face any consequences, but on the condition that he is with her. They make promises to always stay together. They perform the rituals and tie a thread to each other’s hand. He asks her to regard the thread as nuptial chain. She asks him to regard the thread as her promise that nobody can separate them.

He ends her fears by filling Kumkum in her hairline. He tells her that he has applied the Kumkum to assure her that nobody can make them apart. She tells that he is much important for him. Meanwhile, Digvijay asks the commissioner why didn’t he control the inspector and stop him from doing his duty. He tells that Inspector is a true policeman, who will always do his duty. He regrets that Digvijay is his brother, who kidnapped his son. Digvijay asks him to fire the inspector from the job. He asks commissioner if he wants to save Abhi.

Commissioner asks him the reason for getting Abhi killed. Digvijay tells him that Abhi snatched something from him, for which he will be killing him. He tells that he will not tell him the reason. He asks commissioner to stop him if he can. He swears to get Abhi killed. Commissioner wishes Abhi’s safety. He knows his brother is mad. Digvijay meets his henchmen and learns that Abhi and Pragya are still safe. He hires a corrupt police officer to get Abhi and Pragya killed. He hurts himself in anger.

Sarita and Baljeet wait for Abhi and Pragya home. Purab tells that he wants to perform the aarti to welcome them. He is much happy for them. Aaliya feels everyone is waiting for Pragya. Everyone ignores Aaliya. Tai ji drops the Kumkum by mistake. Baljeet worries by the bad omen. Sarita makes prayers for Abhi and Pragya. Abhi and Pragya are on the way to home. Abhi finds strange that the henchmen aren’t following him. He doesn’t remember the route. Pragya asks him to listen to her. She feels they lost the way. He tells her that he is just thinking of romance.

She asks him to stop the car and ask the way. He stops the car. He tells her that her wish got true, police has come to help them. They seek help from the police. Inspector tells him that some people want to kill him, he has come to take him to a safe place. Inspector cheats Abhi to kill him. Abhi and Pragya aren’t aware of the danger on their lives.

Moreover, Pallavi is worried for Meera. Vikram tells Pallavi that she can stay in touch with Meera. He looks for Ranbir. Pallavi realizes that Aaliya has crossed limits this time. She feels Aaliya insulted them. Vikram confronts Ranbir. Pallavi asks Vikram to let Ranbir rest. Vikram asks Ranbir how could he joke about Abhi and Pragya’s lives being in danger. Pallavi wants to know what happened. Ranbir’s prank gets known to Pallavi. Ranbir tells Vikram that Rhea was troubling him a lot. Pallavi tells that Ranbir is unwell. Vikram tells that Rhea is in terrible shock by Ranbir’s prank. Vikram asks Ranbir to know that Abhi is really in danger. Ranbir is shocked.

Vikram tells that the truth that someone wants to get Abhi killed, Abhi is still safe, but there is still a threat on his life. He asks Ranbir not to speak bad things next time. Ranbir laughs on hearing Vikram. He shares his confusion. He realizes that Vikram loves Abhi more than Pallavi. Ranbir doesn’t think that his words will turn true. Purab packs his bag.

Reviewed Rating for Kumkum Bhagya 8th February 2021 Update Abhi Pragya tricked: 4/5 This rating is solely based on the opinion of the writer. You may post your own take on the show in the comment section below.