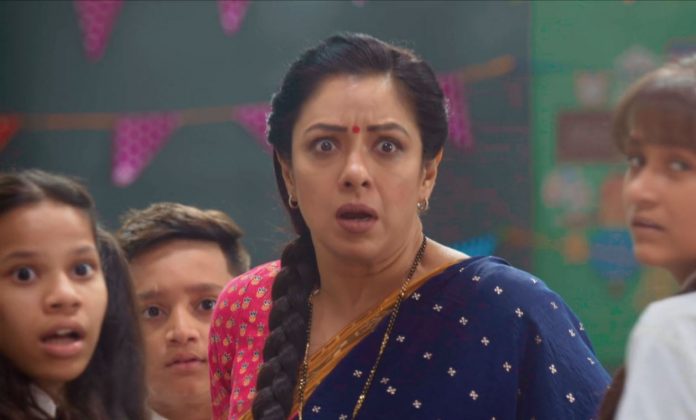 Vanraj doesn’t want any more issues. Kavya tells the inspector that she angrily filed the complaint. Samar gets freed from the police. Inspector rebukes Kavya for ruining Samar’s personal, professional and social life. Kavya tells that she has withdrawn the complaint. Anupama wants her to apologize to her son. Kavya apologizes to Samar. Anupama threatens Vanraj of ruining his world if he tries to put their children into trouble.

Anupama protects her son and brings him home. Samar gets to see Anupama’s strong side. Hasmukh and Leela want to know what had happened at the police station. Nandini tells that Anupama has answered Kavya in her own way. Samar apologizes to Anupama. Vanraj asks Kavya to stop any drama in front of Pakhi. He doesn’t want to forgive Kavya. He tells her that he can show his anger on her if she dares to target his children.

He feels she got him ashamed in front of Anupama. He meets Pakhi and hugs her. He hides the matter from Pakhi. Samar tells that he isn’t sorry to misbehave with Vanraj and Kavya. Anupama tells that he is losing his values by meeting them. She explains that she can’t tolerate if anything happens to him. He can’t see her hurt. He tells that its his right to worry for her. Anupama knows that he loves her a lot. She begs Leela to stop pressurizing her. She doesn’t want to talk to Vanraj. She feels suffocated in the house.

Kavya asks her to sing Anupama’s praise. She wants Pakhi to return back to Anupama. Pakhi clears that she is staying back just for Vanraj. Pakhi berates her and makes a leave. Kavya tells Vanraj that she has a right to scold Pakhi. She adds that Pakhi is following Samar’s footsteps, Anupama has spoiled them. She argues with Vanraj and gives Pakhi’s responsibility back. Meanwhile, Anupama is stressed to see the gas stove in the cooking class. She tells that the kids are young, they will be at risk using the gas stove. The school staff asks her not to miss the class, else the parents will complain.

Anupama agrees to conduct the class when the school staff is taking the responsibility. Anupama happily takes the class. She forgets her sorrow for some time. She makes delicious items. She gets busy in sorting kids’ fight. She doesn’t notice while a cloth hanging catches fire. She gets a shocker when the fire spreads in the class. She fears of the explosion. Anupama rescues the kids, and gets stuck in the class. Samar and Vanraj get informed by Pakhi. They rush to save Anupama. Vanraj can’t let anything happen to Anupama. Anupama’s life falls in danger when she faints in the fire ring. Will Vanraj come to her rescue and save her life? Keep reading.

Reviewed Rating for Anupama 8th February 2021 Written Update Upcoming shocker: 5/5 This rating is solely based on the opinion of the writer. You may post your own take on the show in the comment section below.