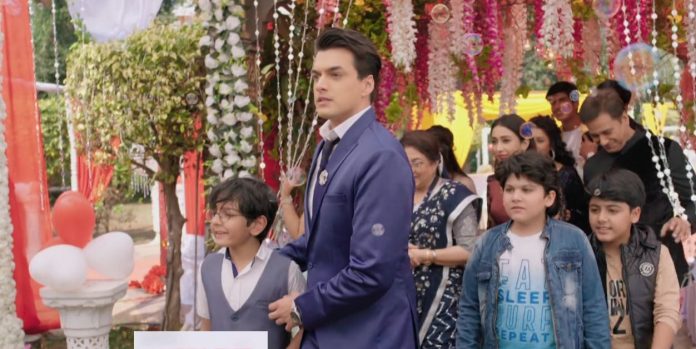 Yeh Rishta Shocker for Goenkas 15th February 2021 Kartik and Sirat meet once again on Kartik and Naira’s wedding anniversary. Kartik plans to keep the anniversary party just to prove to Kairav that Naira is no more, she passed away and can never come back in their lives. Kartik wants to explain Kairav that Naira will always stay in their hearts, she will never appear in front of their eyes, but her memories will be flashing in their minds.

He doesn’t want Kairav to give Naira’s place to Sirat. He realizes that Kairav is feeling attached to Sirat just because of her looks. Kartik has no plans to meet Sirat again. He wants her away from Kairav’s life. He feels once Naira’s absence gets hurting Kairav’s heart, he will accept that Naira left them. He meets his family to propose about the anniversary party celebration. The family finds it a really weird idea at first, since Naira is dead, it doesn’t make any sense to celebrate the wedding anniversary.

Kartik explains them that even if one of the life partner is dead, the other one can throw a party in remembrance and celebrate happily for the sake of the dependents. He wants Kairav to stop expecting that Sirat would come back. He convinces the family for the party. He adds that they have to get Kairav back on track by breaking his hopes from Sirat.

The family agrees to host the party for Kairav’s sake. They also want Kairav to forget Sirat and accept Naira’s death. Manish feels its his fault that he had sent Kairav to the hostel where he came across Sirat. He is much guilt stricken. He shares his feelings with his mum, who feels there a hidden meeting in Kartik and Sirat’s meeting. She doesn’t know if Sirat is Naira or just her lookalike. She tells Manish that nothing in the world happens without a purpose.

She wants to know the meaning of the signs given to them from destiny. She tells Manish that Sirat’s chapter can’t end so soon. She wants to meet Sirat and know more about her. Kartik surprises Kairav with the party invitation card. Kairav is much happy knowing about Kaira wedding anniversary party. He hopes that Sirat comes there to meet him.

Kartik wants his hope to never get revived. He feels its a big day for them. Meanwhile, its a big day for Sirat as well, since she goes for her boxing match. The match result is going to decide her future. Sirat is much sorrowful because of Kartik and Kairav, but Maudi and Rohan encourage her to stay focussed on her boxing match. They know what boxing career means for Sirat. They wish all the best to Sirat for her big day. Kartik and Sirat reach the same venue, Udaipur royal club where private and public events are held.

Moreover, Kartik throws his private party at the club, while Sirat comes for her boxing match. Sirat is nervous for the match. Her victory matters a lot to her this time. She can’t step back. She doesn’t want to become a loser and face Sheela. She collects her anger on her poor childhood. She wants to return the sorrow to Sheela. She is able to connect with Kairav’s emotions due to her distressed life.

Kairav waits for Naira at the party. Sirat happens to reach the venue when Rohan assumes it to a surprise birthday party for Sirat. They see Naira’s picture with good wishes. Goenka family are just stunned to see Sirat, who is just Naira for them. Sirat’s truth takes time to reach their senses. Kairav is very happy. He tells them that his heart knew it that Naira will be coming to meet them. What will Kartik do to remove Sirat from Kairav’s life? Keep reading.

Reviewed Rating for Yeh Rishta Shocker for Goenkas 15th February 2021: 4/5 This rating is solely based on the opinion of the writer. You may post your own take on the show in the comment section below.