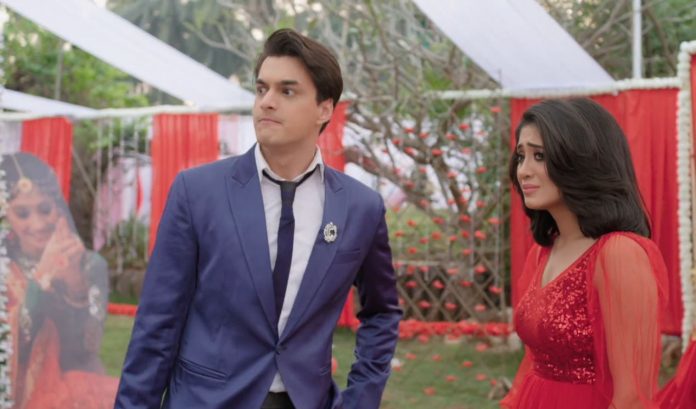 YRKKH Kartik Sirat connect Upcoming big twist 19th February Kartik reprimands Sirat on seeing her in Naira’s place, wearing Naira’s gown and taking up Naira’s identity in front of the family. He fears that Kairav won’t be able to accept the truth once Sirat becomes Naira in his eyes. He doesn’t want that to happen at any cost. He takes Sirat aside in a fit of rage. He doesn’t insult her, but just accuses her for taking an advantage of being Naira’s lookalike. He thinks Sirat has come to meet Kairav just to become a part of the rich Goenka family. He knows that she has seen his house and would try to fit in to enjoy the luxuries.

He suspects her intentions. He tells her that she has been mean to play with a little kid’s feelings. He accuses her for the mistakes she didn’t commit. He tells that he will not let her succeed. He wants to make sure that Sirat never meets his family and stays too far from Kairav. He tells that she can’t win over anyone’s mind, even though she resembles Naira’s look and has the same voice, but she can never take Naira’s personality and place in their lives. He doesn’t listen to Sirat when she justifies herself. She didn’t know that the party is for Naira.

She had come there to just see the guy who loves his wife so dearly. She wanted to know if such men exists in the world. She tells that she didn’t mean to gatecrash his party, its just a coincidence. She defends herself that she didn’t meet Kairav with wrong intentions. He tells her that he knows her well, she would be dreaming of something big that she planned everything to come in the same party where they are celebrating his anniversary.

He tells that he actually wanted to convince Kairav that Naira has passed away, she will never return to them. He wanted Kairav to accept the truth. He tells her that her arrival has given false hopes to everyone, even though the elders will understand, but Kairav’s fragile mind can’t accept the truth. He knows that Kairav is seeing Naira in Sirat. Kairav really believes that Sirat is Naira. He wants Kartik to believe his belief once and find the truth. Kartik doesn’t think Sirat can be his Naira. The Goenkas are left stunned by seeing Sirat.

Kartik doesn’t want them to give a chance to Sirat to influence them. He vents anger on Sirat for spoiling his special day. Sirat tells him that it was a special day for her as well, which got completely down by Kartik’s anger. Kartik and Sirat’s argument leave Kairav disturbed. Sirat feels insulted when Kartik throws her out of the party. He calls the party over. He tells Kairav that Sirat isn’t Naira, he can’t accept Sirat in their family, she can never be Naira for them. He asks Kairav to not get stubborn and forget Sirat.

Kairav doesn’t listen to him. He just wants his mumma back. He runs after Sirat and gets blocked by Kartik. He tells that he will always believe that Sirat is Naira and try hard to get her home. Gayu also supports Kairav. She also thinks that Sirat is Naira. There are two opinions in the family about Sirat and Naira. Kartik feels helpless when he fails to explain Kairav.

Sirat gets upset with Rohan for not revealing to her about the club mistake. She tells him that Kartik has shouted on her like something, he misunderstood her intentions and asked her to never return in their lives. She feels really let down by Rohan. She feels lonely in her life, since nobody needs her. Kartik has cleared to her that he doesn’t need her in their lives.

Sirat tells Rohan that she will leave Udaipur to never return. Rohan supports her. Rohan and Sirat make a leave form Udaipur to never come back, while Kairav falls sick in memory of Naira. Kairav wants to see Naira again. Kartik gets compelled by Kairav’s deteriorating health. He tells that he will get Sirat to Kairav for his recovery. Kairav will become the connecting link between Kartik and Sirat. Eventually, the truth that Sirat is actually Naira will come to the fore. What do you think? Comment below and keep reading.

Reviewed Rating for YRKKH Kartik Sirat connect Upcoming big twist 19th February: 4/5 This rating is solely based on the opinion of the writer. You may post your own take on the show in the comment section below.