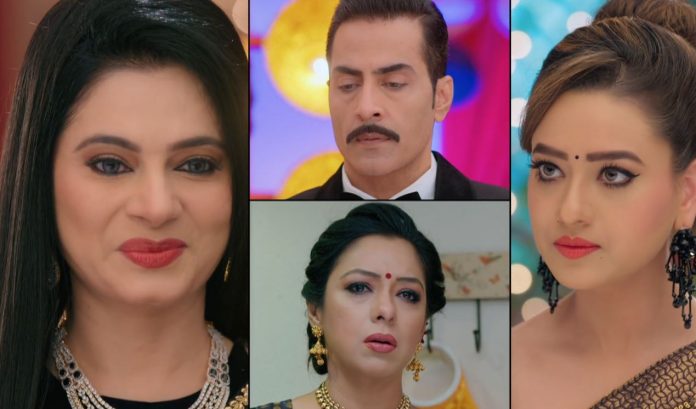 Anupama Rakhi expects havoc Kavya confesses evil motives Anupama wishes Vanraj on his birthday. Vanraj isn’t happy that Kavya came home to disturb his family, but he keeps his cool. Anupama tells them that she has a wish. She expresses her wish to forget the past and make a new start with Vanraj and Kavya. Leela wishes Vanraj to have a long life. Vanraj promises that he will not leave her alone. Anupama comes to the room and arranges the things, unaware that Vanraj is also there. Vanraj apologizes to her.

She feels sorry that she didn’t knock before coming. She recalls the bad past of Vanraj and Kavya. She feels hurt in her heart but keeps calm. He tells her that she has done something which wasn’t easy for her to do. He thanks her for bringing peace in the family. Anupama gives him a white rose for their friendship. She tells him that love has ended in her heart, but she can have a friendship with Vanraj. She doesn’t want hatred to enter her heart. She tells that they can have peace between them, so that they don’t feel ashamed.

She tells that they can try to be friends for the sake of their children. She wishes him on his birthday. He gets emotional. He thanks her. The family gets decked up for the party celebrations. Kinjal tells that Rakhi is coming soon. Rakhi gets dressed up according to the theme. Rakhi asks the family to stop Mama ji from flirting. Leela also compliments Rakhi for her beauty. Rakhi can’t believe that Leela has complimented her.

Vanraj and Anupama begin their friendship. Kavya comes soon to be with Vanraj. She tells that she wanted to be with Vanraj. She likes the theme. Pakhi asks Kavya if she really liked the theme. Kavya tells that black and gold theme looks classy. Rakhi wonders why did Kavya change herself so much. She thinks Kavya is up to something. Kavya ruins Anupama’s hard work by dropping the cake, but thankfully Anupama saves the cake. Rakhi enjoys the drama. Pakhi tells that Anupama always handles everything. She praises Anupama, to which Kavya agrees.

Rakhi knows that Kavya can’t be Anupama’s friend. Rakhi begins her taunts, which makes Leela know that Rakhi is absolutely okay. Anupama feels odd and misses Samar. The entire family misses Samar. Samar wishes Vanraj and watches the cake cutting ceremony on the video call. Anupama is affected by the bitter memories. Pakhi asks Vanraj to make a wish. Rakhi tells that Vanraj should wish for a job. Anupama defends Vanraj who is very qualified to get any job.

Vanraj is worried when he sees Anupama as his wish. He doesn’t share it with anyone. He cuts the cake and tells that Leela and Hasmukh will have the first bite of the cake this time. Paritosh asks if he will get the last turn. Vanraj and Anupama land into a dilemma when Kavya acts too sweet and friendly. Anupama refuses to have the cake from Vanraj or Kavya’s hands. She tells that she can’t forget everything happened in the past, since she has lost her rights on Vanraj. She tries to gather herself after she feels broken down.

Rakhi confronts Kavya for her acting. She knows that Kavya is planning something. Kavya unveils her plans to ruin Anupama’s life. She tells that she had to enter the house and take revenge on Anupama. She wants to ruin Vanraj’s family and oust them from the house. She confesses her evil intentions making Rakhi really happy. Pakhi learns Kavya’s evil intentions and wants to expose her in front of Vanraj? Will Anupama realize Kavya’s evil and protect her family from her? Will Vanraj regret on his wrong choice and return to Anupama? What do you think Vanraj and Anupama should do to stop Kavya? Comment below and keep reading.

Reviewed Rating for Anupama Rakhi expects havoc Kavya confesses evil motives: 4/5 This rating is solely based on the opinion of the writer. You may post your own take on the show in the comment section below.