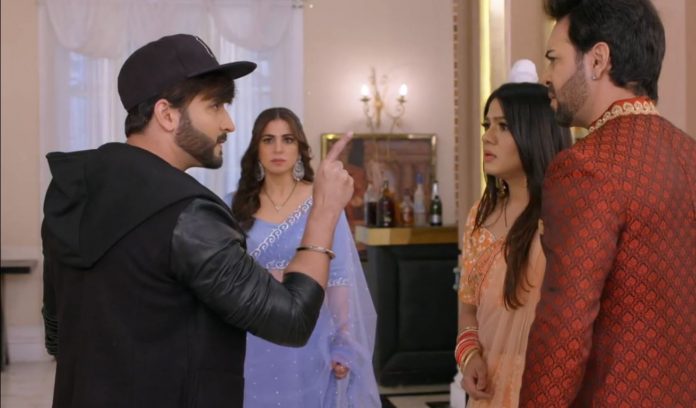 Kundali Bhagya 24th February 2021 Written Update Karan loud warn Bani questions Kritika about her decision to marry Prithvi. Kritika tells the family that the goons followed them when they tried to flee and save their lives. She adds that Prithvi took her to a crowded place to get saved from the goons. They had entered the mass marriage event to get saved. In the flashback scene, Prithvi explains Kritika that mass marriage event is going on, eight couples are getting married at the same time. He asks Kritika to hide act as a guest. Kritika feels scared. The goons enter the event to find Kritika.

Kritika learns that the goons are around. Prithvi hides with Kritika. He assures that they will leave from the event soon. The MLA wants the goons to leave and not spoil the event. He is related to Monu, but wants the goons to leave. He tells the goons that no one from outside has come here. Monu wants to search the place once. Prithvi tells Kritika that they can’t escape now. Kritika gets an idea. She gets into a bride’s disguise. Prithvi and Kritika sit as one of the couple to get saved from the goons. They follow the rituals along with the other couples.

They take the marriage rounds to fool the goons. Kritika recalls that one of the couple backed out from the marriage, which helped Prithvi and her take their place. Prithvi and Kritika realize that they really got married. Karan tells Kritika that he doesn’t believe this marriage. Preeta tells that Prithvi is a wrong person, he is a criminal who has done many crimes till now. Kritika doesn’t believe her, since she said the same thing for Akshay.

Sherlyn tells Kritika that she doesn’t need to keep the marriage when she was badly stuck to save her life. Prithvi asks them to explain his mistake. He tells Preeta that Sarla chose him for her daughter, she can’t be wrong in judging her. Karan wants Prithvi to stop the nonsense. Kritika doesn’t want to judge Preeta about the past. Preeta asks Kritika to think calmly, its not a marriage that happened in a wrong way. She asks Kritika not to think of the society and think of her own life. She wants Kritika to decide on her own, start a new life by leaving Prithvi.

She adds that Kritika has no love for Prithvi, the marriage is meaningless. Mahira supports Kritika. She asks Preeta to let Kritika decide. Karan asks Mahira to stay out of their matter. Preeta wants Kritika to think well, Prithvi doesn’t deserve her. Kritika questions Preeta for marrying Karan by deceive, and still keeping the marriage well. She tells that Prithvi has accepted her, while Karan didn’t even know about his bride. Preeta tells that there is a difference between both the marriage, she was already Karan’s wife when she married him for the second time. Kritika tells that she has also accepted Prithvi as her husband.

Prithvi tells that he has accepted Kritika as his wife. Karan tells that he will never acknowledge this marriage. He warns them. Kritika asks Karan what’s his problem with Prithvi. She explains that Prithvi also accepted the marriage. Karan gives her verdict that he can never accept Prithvi as his brother-in-law. Rakhi and Kareena console Kritika. They ask Kritika to give some time to Karan. Bani assures her support to Kritika. Kareena is still coming to terms with the reality. Rakhi has no option than to bless Prithvi as Kritika’s husband.

Kareena tells that she hasn’t accepted Prithvi by now. Preeta gets hopeful on hearing Kareena. Kareena is irritated by the fact that Prithvi is Preeta’s ex-fiance. She tells that the marriage didn’t happen in front of her and she won’t accept it. Kritika decides to marry once again for the sake of Kareena. Kareena hugs Kritika and agrees to get Kritika remarried to Prithvi again in front of the society. Prithvi tells that he can also marry Kritika twice if Preeta and Karan can marry twice. He keeps a condition for them.

He tells them that Preeta must handle all the arrangements of the marriage. Rakhi tells that Karan would not agree. Prithvi tells them that Preeta has much experience in the marriage functions, Sarla and Shrishti may also help in the management. He taunts Preeta for the past. Kareena orders Preeta to organize the functions and not upset Kritika. Sherlyn didn’t know that Prithvi will marry Kritika. She wants to confront him. Bani and Rakhi wish Kritika for a new start. They plan their wedding functions. Prithvi tells Kareena that he doesn’t want to know about Kritika’s past. He shows his respect for Kritika. Kareena asks him to get freshen up.

Kritika is on cloud nine to feel pampered by Prithvi. Sherlyn cries a lot for Prithvi. Mahira gives her hopes that things will get fine. She didn’t see Sherlyn so depressed and shattered before. Sherlyn tells that she wants to die. Mahira asks her to take care. Sherlyn makes her leave from the room. She feels cheated in love. She shows her true emotions for the first time. She doesn’t forgive Prithvi for the cheat.

Reviewed Rating for Kundali Bhagya 24th February 2021 Written Update Karan loud warn: 4/5 This rating is solely based on the opinion of the writer. You may post your own take on the show in the comment section below.