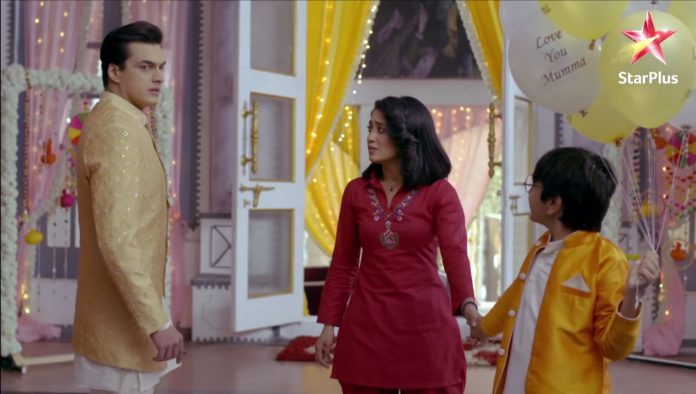 Yeh Rishta Kartik to remarry Upcoming big twist Promo We will be seeing a track of Kartik and Sirat’s marriage coming up. Kartik will be inviting Sirat home just for Kairav’s sake. Kartik has saved Sirat’s grandma by paying the hospital bills on time. He has done a big favor on her. He wants to meet Kairav at the hospital and save his life. Kairav has been leaving the willingness to live when Kartik doesn’t get Sirat to him. Kairav believes that she is really Naira and one day the truth will come out. He wants Kartik to not let Naira go away so soon until the truth comes to the fore.

Kartik has a belief that his Naira is dead, they can never unite in this birth, Sirat is a different person who just resembles Naira’s looks. Sirat learns that Kartik is forcibly taking her to the hospital to see Kairav. She doesn’t want to accompany him and finds his help to Maudi a selfish one. She calls him selfish to think of his own son and help Maudi. Sirat adds that she isn’t interested in meeting Kairav. She recalls the insult she faced when she reached the party by mistake.

She tells Kartik that he can’t command on her life, he can’t order her to meet Kairav or stay away from him. She wants to take her own decisions. She has now decided to not meet Kairav and give him any false hope. Kartik pleads to her that Kairav is critical, he is battling with his death just to see his mum. He tells her that Kairav may not survive if she doesn’t help him cope up with the truth of Naira’s death. He asks Sirat to just remember that Kairav regards her a mum. She turns down his request.

She tells him that she will pay back the money to him. He doesn’t want any money from her, but just a favor. Sirat gets hell bent to not meet Kairav. Kartik is in a big dilemma when he meets Kairav and finds him in a terrible state. He realizes that Kairav is sinking, he may go too far from the family if Sirat doesn’t come. He can’t compel Sirat more. He tells the family that Sirat has refused to come, she will never come to help Kairav since he had been harsh to her before. He regrets his bad behavior. He never imagined that Kairav will put himself in a big risk for Sirat’s sake. He wishes that Sirat comes to meet Kairav.

His wish turns true. Sirat learns that Kairav is really dying. She rushes to meet Kairav and tells him that his mumma is back. She tells him that she is Naira, she has come back to her son. Kairav gets revived by her coming. She promises to be with him. Kairav is all glad to have her back. He asks Kartik to not let her go anywhere now. Dadi plans to get Kartik married to Sirat. She sees a bright future for Kartik and Kairav if Sirat comes in their lives. Dadi wants to convince Sirat for the marriage. What will Rhea do when she fails to impress Kartik? Keep reading.

Reviewed Rating for Yeh Rishta Kartik to remarry Upcoming big twist Promo: 4/5 This rating is solely based on the opinion of the writer. You may post your own take on the show in the comment section below.