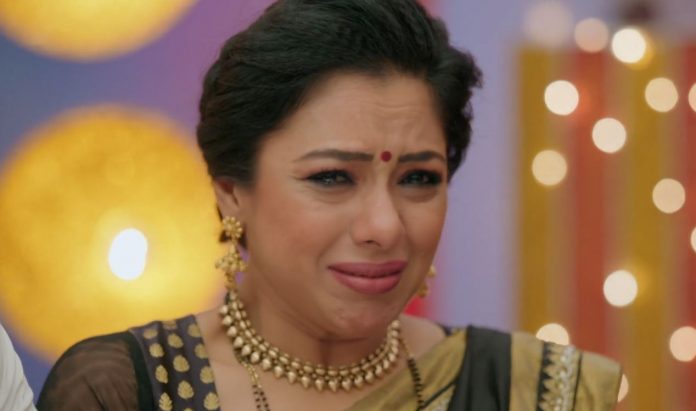 Anupama Update Pakhi kidnapped Major shock Upcoming Anupama takes Pakhi’s side when the former gets lashed by her father Vanraj. She doesn’t want Pakhi to feel alone that both her parents don’t care for her. She can’t let Vanraj scold Pakhi. She tells that she has to explain Pakhi and understand her, which is quite tough. She apologizes to Vanraj, who is feeling guilty for hurting Pakhi. He feels Pakhi is in this mess because of his mistakes.

Anupama takes responsibility of the mess as well. She tells that they have to understand Pakhi emotionally. Kavya asks them if Pakhi is fine. Vanraj wants her to leave until he finishes the talk with Anupama. Kavya is tensed that Anupama overheard Rakhi and her conversation. She doesn’t want her motives to get exposed. Anupama tells Vanraj that she will go and see Pakhi. He thanks her for still caring for everyone so much. She asks him not to help her in kitchen, since Leela won’t like it. The family celebrates and go for the dinner.

Pakhi doesn’t join them. Anupama takes care of everyone’s food. Leela asks Kavya not to help them and just give them some peace. Anupama waits for Pakhi. Rakhi asks Vanraj and Kavya about their marriage. Leela asks her not to talk during the dinner. Anupama takes the food for Pakhi. She looks for Pakhi and instead gets her letter. She is tensed to learn that Pakhi has left the house. She runs to Vanraj to share about Pakhi’s letter.

Vanraj runs on her call. Anupama tells Vanraj that Pakhi has left a letter for them. Vanraj wants everyone to just calm down until he reads aloud the letter. The family gets too regretful on knowing Pakhi’s sorrow. Pakhi didn’t know how to accept her parents’ divorce. She loves them equally. She feels they got divided and even their love got divided. She doesn’t want to stay with the family which lost the charm. She mentions her insecurities because of Kinjal and Kavya. She feels no one needs her in the family.

She tells that she will never return to them, she has left them forever. Vanraj is much saddened to lose his daughter. He feels responsible. He wonders if Pakhi will be doing something wrong in rage. The celebrations turn into a shock. Paritosh calls Pakhi. They find the phone at home. The family rushes to find Pakhi and take help from Pakhi’s friends. Rakhi gets involved in the family matter to help Shahs. She leaves her jealousy behind and comes ahead to find Pakhi. Anupama and Vanraj try to find Pakhi. Everyone tries hard to find Pakhi on their levels.

Rakhi offers support to Leela in the bad times. Leela gets glad by her assurance. Kavya is puzzled to see Rakhi’s good side. Anupama and Vanraj madly rush in their search. He cries that he couldn’t handle Pakhi for 16 days when Anupama has easily handled her for 16 years. He salutes Anupama who is the best mother. He tells that he didn’t see Pakhi’s hidden pain behind the evident anger. Anupama tells that she is equally at fault, they didn’t think of Pakhi when they decided to divorce. She finds Vanraj in a state of sorrow.

She tells that he can’t drive in this state. She drives the car, leaving him surprised. He feels she is really strong. Hasmukh thanks Rakhi for the help. Rakhi tells that the police has started finding Pakhi. She knows the pain when a daughter leaves the house without informing the parents. She tells that she couldn’t become a good mother because of her career, but she can rectify her mistake. Kinjal regrets to hurt Rakhi. Leela consoles Rakhi. They have an emotional moment. Anupama and Vanraj learn from the police about a kidnappers gang who are kidnapping young girls to sell them off. Pakhi also gets kidnapped. Anupama senses that Pakhi is in danger. How will they rescue Pakhi? Do you think Rakhi really changed or is she behind the kidnapping? Comment below and keep reading.

Reviewed Rating for Anupama Update Pakhi kidnapped Major shock Upcoming: 4/5 This rating is solely based on the opinion of the writer. You may post your own take on the show in the comment section below.