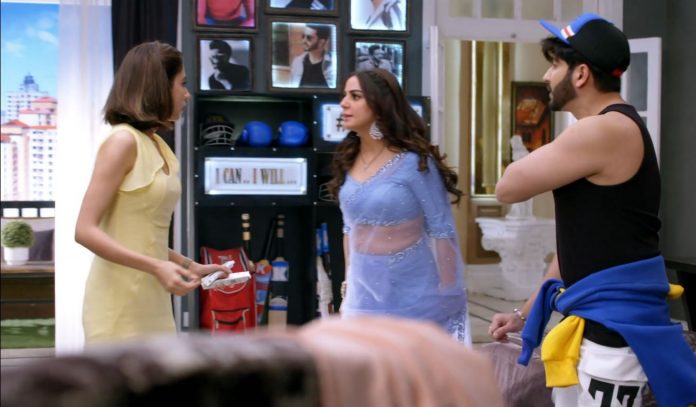 Kundali Bhagya 27th February 2021 Written Update Preeta outbursts Preeta tells that Prithvi is very clever, he has tricked her for long. She wants to be alert. She tells that Karan tried hard to show Prithvi’s truth to her, but she didn’t realize it soon. She regrets that Kritika is blinded in Prithvi’s love, she will never listen to anyone. She wants to find out Prithvi’s ulterior motive. Prithvi finally calms down Sherlyn by confessing true love to her. He tells her that she has a right to know the truth behind the marriage. He tells that they are crime partners as well, he was Preeta’s big lover before, but he didn’t stop loving Sherlyn.

He tells that Kritika doesn’t mean anything to him, he married her just to come to Luthra house. Sherlyn asks him why did he happily make an entry in the family, like he is willingly doing it. He tells her that he has planned everything for her sake. She doesn’t believe him. He tells her that he got her married to Rishabh for the richness, they had to ruin Luthras. He asks her to realize what she got for helping Mahira. He tells that Mahira was just using her. He wanted her to not know about the marriage. They both threaten each other in anger like wild lovers.

On the other hand, Preeta meets Kritika to tell her about Prithvi. Kritika wants her to make a new start. She has forgiven Preeta for Akshay’s matter. She tells that she trusts Preeta now. She is happy that she didn’t marry Akshay, since she got Prithvi in her life. She feels Prithvi is the best guy in the world. She holds Preeta responsible for the good things happening in her life. She tells Preeta that Prithvi is really nice, he was scared to meet Luthras. She sings praises of Prithvi and thinks he loves her. She asks Preeta to give a chance to Prithvi.

She wants Preeta to handle the functions well and make everything beautiful if she wants her happiness. Preeta tells that she wants to invite Prithvi’s relatives. Kritika asks her to come along. Prithvi asks Sherlyn to leave the past into the past. He tells her that they are devils, they will not talk about his marriage. He doesn’t want anyone to know about their affair. Sherlyn tells that she doesn’t have any faith on him. She feels he is her life’s mistake, Rishabh is better than him. He angrily goes to slap her when she praises Rishabh.

Prithvi tries hard to convince Sherlyn and accepts the beating from her. He tells her that he loves her a lot, he will always love her, even if he had married Kritika. He knows that she loves him and he is her only weakness. She accepts that she is addicted to Prithvi, but now she regrets to love him. Prithvi asks her to forget everything if she wants their future together. Prithvi tells Sherlyn that he didn’t plan to marry Kritika, he was doing a drama and didn’t realize it. He asks her to vent anger on him, but forgive him.

He tells Sherlyn that he didn’t go close to Kritika, since he loves just Sherlyn. Sherlyn finally melts her heart and hugs him. Preeta and Kritika look for Prithvi. Sherlyn asks Prithvi why didn’t he call her to wish on valentines. He confronts him for his love for Preeta. He tells that he had confessed that he used to love Preeta, it was also past. Prithvi and Sherlyn’s argument continues. Preeta overhears their conversation. She wants to call Kritika and show his truth. Sherlyn angrily threatens to expose Prithvi’s truth. Prithvi stops her.

Sherlyn is shocked to see Preeta and Kritika at the door. Prithvi hides under the bed to get saved. Kritika calls Prithvi to know if he is there. Prithvi gets lucky that his phone is on silent. Sherlyn asks Kritika to find Prithvi outside. She sends away Preeta and Kritika. Prithvi thanks Sherlyn for saving him. He runs away from her room window. He calls Kritika to make an apology. She tells him about Preeta’s claim, that he was in Sherlyn’s room. He calls his rubbish. Kritika tells Preeta that Prithvi is just coming.

Prithvi doesn’t want Preeta to spy on him. He still wants Preeta in his life. He wants Karan to get paired with Mahira, not Preeta. Meanwhile, Karan packs his sports gear for his practice. He gets a muscle cramp. Mahira worries on seeing this. He asks her to just call Preeta. Mahira wants to use this situation in her favor. She tells Karan that she didn’t find Preeta anywhere. Karan agrees to take her help since he is in pain. Mahira gets happy to be close to him. Prithvi wants his marriage to go well. Kritika asks Preeta to wait for Prithvi. Prithvi finds her alone and flirts with her. He tells her that he has come in the house just for her.

He pretends when Kritika comes. He cleverly keeps Kritika’s faith. Prithvi tells that he is really sorry. Preeta forgives him. He asks Preeta to take his name with respect. She asks him for the relatives’ contacts. She makes a leave, while he falls for her even more. Prithvi continues to lie to Kritika. He tells her that Preeta was behaving strange as if she has feelings for him. Kritika gets worried. He tells that Preeta was trying to meet him by making such a silly excuse. He tells that he doesn’t want to keep any secret with her. He tries to brainwash Kritika against Preeta so that Kritika helps him in breaking Karan and Preeta’s marriage.

He asks her about Karan and Preeta’s relationship lacking love. He feels Preeta isn’t happy, she is insecure in her relationship. Kritika doesn’t think so. Prithvi tells her that Karan cheated him and took his place to marry Preeta. He tells that he would have been Preeta’s husband, maybe she is regretting a lot. He adds that Preeta isn’t happy with Karan for sure, maybe she regrets for her marriage. Kritika tells that she knows Karan and Preeta love each other a lot, they are happy together. He guarantees Kritika that even she will see Preeta’s feelings for him. Kritika turns upset. He wants Mahira to take Karan with her. He wants Preeta to become his wife.

Preeta is in shock to see Mahira with Karan. She drags Mahira away. Karan apologizes to Mahira. Karan tells that he had a cramp and took Mahira’s help, when Preeta wasn’t around. He adds that Mahira was hesitating, he insisted her to apply the ointment. Mahira apologizes to Preeta. Preeta does the aid to Karan. He tells that he is better. He asks the reason for overreacting in anger and jealousy. He wants her to trust him. She vents Prithvi’s anger on Mahira. Will Mahira join hands with Prithvi against Preeta? Comment your views and keep reading.

Reviewed Rating for Kumkum Bhagya 25 February Update Pragya challenges Aaliya: 1/5 This rating is solely based on the opinion of the writer. You may post your own take on the show in the comment section below.